A new vaccine for the Foot and Mouth disease virus

The 2001 Foot and Mouth disease virus (FMDV) outbreak in the UK caused the deaths of over 7 million livestock and cost the economy in the region of £2bn. Globally it remains one of the most economically important diseases in livestock worldwide, with approximately 3 to 4 billion doses of vaccine administered every year. A group of scientists have been using Diamond’s microfocus beamline I24 to help develop a new type of vaccine that is safer to produce, more stable and easier to transport than currently available vaccines, and just as effective.

Professor Dave Stuart from Diamond Light Source and Oxford University was one of the leaders of the study. He explains, “Instead of using infectious virus as the basis for the vaccine, which is the main traditional method of vaccine development, the team synthetically created empty protein shells to imitate the protein coat that forms the strong outer layer of the virus. By using Diamond’s visualisation capabilities and the expertise of Oxford University in structural analysis and computer simulation, we were able to visualise something a billion times smaller than a pinhead. This allowed us to further enhance the design of the empty shells atom by atom. Through information gained at Diamond, we could verify that these have essentially the same structure as the native virus to ensure an appropriate immune response.”

Foot and mouth disease is endemic in central Africa and some parts of the Middle East and Asia. The traditional FMDV vaccine has to be produced and stored in a chilled and stable environment, making distribution in these areas problematic. Preclinical trials on the new synthetic vaccine have shown it to be stable at temperatures up to 56°C for at least two hours, making transporting and storing the vaccine much easier. Not only that, the vaccine does not require high containment, making it safer and cheaper to produce. 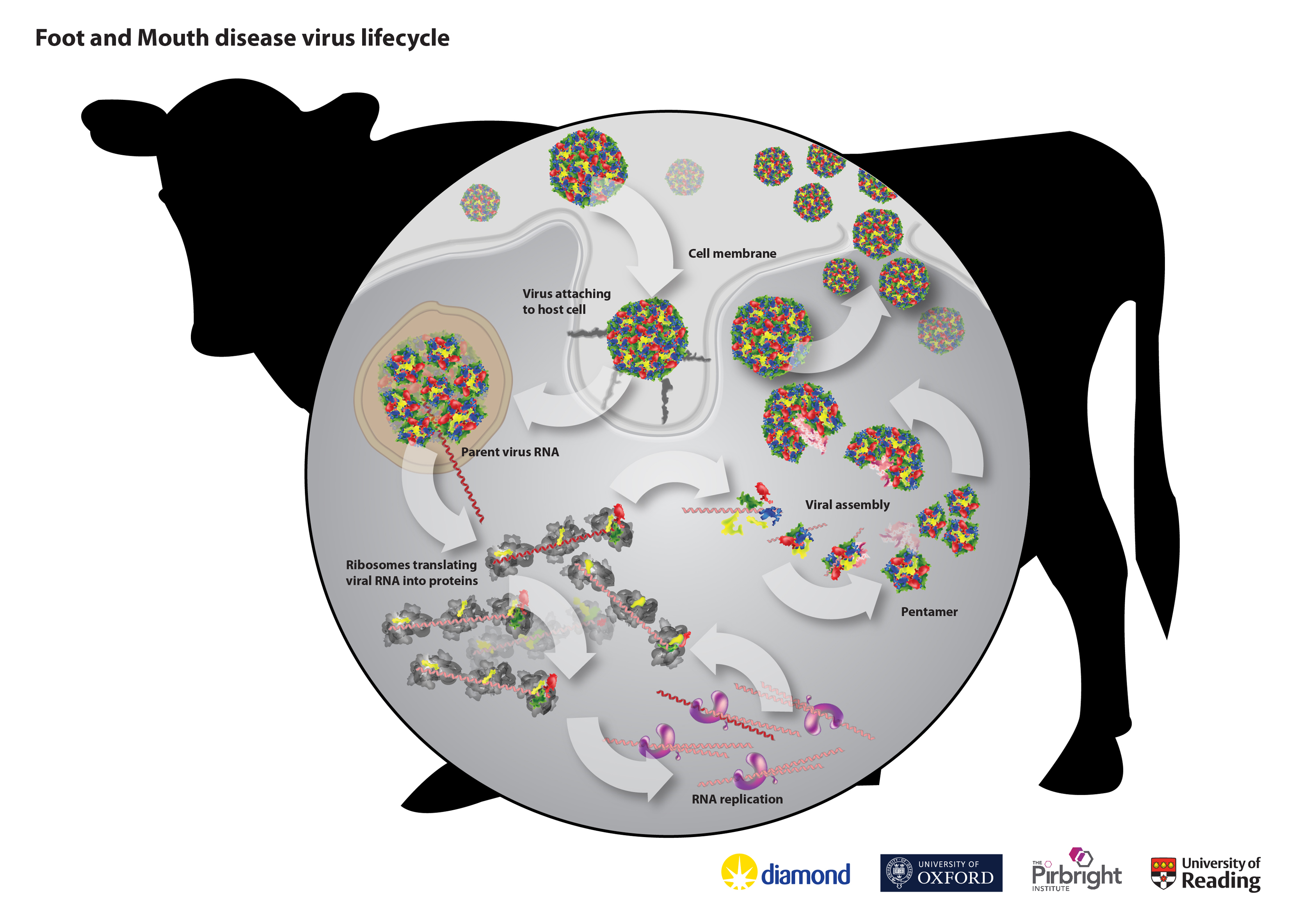 Dr Bryan Charleston leads a team at The Pirbright Institute in the UK which has developed a detailed understanding of the immune response to FMDV in cattle and is leading the vaccination trials work. He says, “The ability to produce a vaccine outside of high containment and that does not require a cold storage chain should greatly increase production capacity and reduce costs. Globally there is an undersupply of the vaccine due to the high cost of production and this new development could solve this problem and significantly control foot-and-mouth disease worldwide.”
The breakthrough is the result of a major collaborative project spanning over 20 years. The team synthetically created empty protein shells using a methodology developed by Professor Ian Jones from the University of Reading. The structure of FMDV was first solved by Dave Stuart at Diamond’s predecessor, the SRS at Daresbury, back in 1989. Diamond was used to develop structure-based methods for predicting stabilising mutations tailored to each serotype (variations of the virus).
Virus crystals are very small and fragile, making them difficult to study. Gwyndaf Evans, principal beamline scientist on I24 says, “On I24 we are able to study the crystals at room temperature, which means we don’t have to physically handle them, thereby preserving their intrinsic high quality. However, because the crystals are so tiny and weakly diffracting, we need a microfocus beam and high X-ray intensity. This combination is what makes I24 unique, there is nowhere else in the world with this capability at the moment.”

<i>Electron density calculated from the X-ray crystallographic analyses of FMDV serotype A22 ‘empty shells’ shown in the vicinity of the pentamer interface both with and without a modification engineered to ‘fasten’ together the adjacent pentamers.</i>

The research at the Pirbright Institute was the direct result of funds allocated in the wake of the 2001 outbreak. Incorporation of the mutations into the empty shells, validation of the predicted improved stability and showing they stimulate protective immunity was performed by Dr Bryan Charleston at Pirbright Institute and Prof. Ian Jones at Reading University and their teams. The stable mutated empty shells were analysed by the Oxford team to demonstrate they remain as authentic copies of the original viruses. Together the three groups have developed a system for the production of empty protein shells at commercially viable amounts.

Gerd Materlik, Diamond's CEO, says, “I think what the collaboration have achieved here is amazing. This is a great example of Diamond playing a crucial role in providing a solution to a problem of global significance. It should be able to get to market and really start to improve animal health on a global scale.”