Following the emergence of the new coronavirus SARS-CoV-2 in late 2019 which quickly developed into a pandemic, the race soon began to discover more about the virus and prevent its spread.

Building on the knowledge gained from the SARS outbreak in 2003, it is hoped that by studying the structure of the proteins in SARS-CoV-2 scientists will identify potential lead compounds and develop therapies to prevent viral infection and replication.

Due to the rapid spread of the virus, the need to obtain results quickly meant timescales were very tight. Using the XChem fragment screening platform meant that we could produce results rapidly and pool expertise from across Diamond’s team of expert scientists.

Following the successful crystallisation of the Main Protease (MPro) at Diamond by the Walsh group, the crystals were brought on to the XChem platform where we were able to screen all the available fragment libraries at Diamond.

This was achieved by a collaboration of scientists from across Diamond’s XChem facility and the I04-1 beamline, who focused entirely on crystal soaking and mounting, and the subsequent data collection.

The focus then switched to a mass effort in data analysis, checking the structures and building the relevant ligands into the electron density. The initial experiments were completed within a few weeks, the data analysis shortly afterwards. All the structures of MPro with bound fragments were then released immediately into the Protein Data Bank (PDB), and published on the Diamond website; a total of 91 bound fragments were identified from the initial screens.

Using Diamond’s XChem fragment screening platform we were able to quickly produce and release data to provide structural information on the main protease of SARS-CoV-2. Releasing information in this manner has allowed scientists from all over the world to use the data and start extrapolating and designing follow up compounds to act as inhibitors for the virus.

The COVID Moonshot was established to facilitate this open-source initiative and as of the end of October 2020 over 14,000 molecules had been submitted, over 1,000 had been synthesised and tested, and over 200 structures determined.

“Performing the experiment and achieving the high data quality in a few weeks, as lockdown started, was a tour de force, and a credit to our highly talented scientists.  Even more remarkable was the response of the international community to the data release: it mobilised a vast pool of expertise, technologies and philanthropy, which evolved into a unique and rigorous drug discovery effort that aims to develop rapidly an entirely novel, easily synthesised, oral antiviral with good safety and pre-clinical properties. Working fully in the open, data are released near real-time, so the outcome will be available to any drugs manufacturer world-wide.

The world’s focus has been on vaccines and repurposing of existing drugs, but the Moonshot is one of a small number of projects attempting novel small molecule therapeutics.”

Prof Frank von Delft, Science Leader of the XChem laboratory at Diamond and Principal Investigator of the Protein Crystallography group in the SGC at Oxford University. 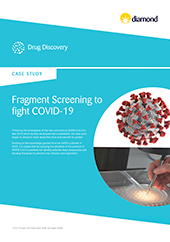