Keeping an oncogene down

The Ras gene family are among the most common cancer-causing genes, and Ras mutations have been found in many tumours. Ras mutations generally lock the protein in its active form, and efforts to develop Ras-based therapies have generally focused on blocking persistently active mutant Ras from interacting with its downstream targets. Dr Judit Debreczeni and her colleagues at AstraZeneca, MedImmune, and the University of Oxford have taken a different approach. In a paper published in Nature Communications, they report on the development of a small protein, DARPin K27, which binds to inactive Ras and prevents its activation. Using two of the Macromolecular Crystallography beamlines (I03 and I04) at Diamond Light Source, they show that when DARPin K27 binds to Ras, it blocks the access of the protein which switches Ras into its active form. While DARPin K27 probably will not be used in therapy, it offers a valuable tool for probing the role and function of Ras and its partners. 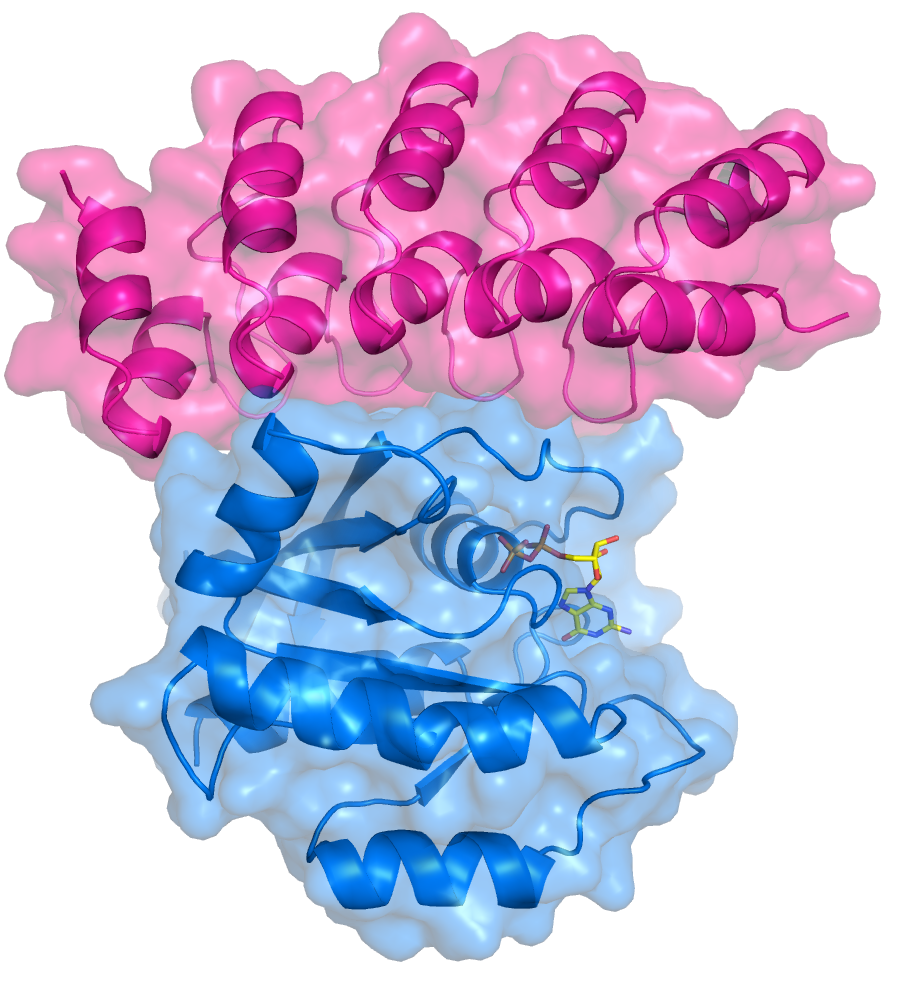 Figure 1: The crystal structure of DARPin K27 (magenta) in a complex with KRAS (blue) bound to GDP (yellow).


The road less travelled
The most commonly mutated family of cancer-causing genes in human tumours is the Ras gene family, comprised of the three genes HRAS, KRAS, and NRAS. The proteins encoded by the Ras genes transmit signals within a cell by switching between an inactive state bound to the molecule GDP and an active state in which they are bound to GTP. Mutations that prevent the protein from releasing GTP lock it into the active state, and the resulting increase in processes of growth and differentiation controlled by Ras can lead to cancer.

While its prevalence as an oncogene makes Ras an attractive therapeutic target, no Ras-based clinical treatments are yet available. To date, efforts towards establishing Ras as a therapeutic tool have mainly focused on blocking its interactions and thus isolating downstream processes rather than on stopping Ras activation. “Over the last couple of years, a consensus has appeared that Ras mutations that are implicated in oncogenesis are constitutively active,” explains AstraZeneca’s Dr Judit Debreczeni, “so trying to inhibit the inactive form wouldn't do much because the inactive form never or very rarely appears in cells.”

Together with other researchers at AstraZeneca, MedImmune, and at the University of Oxford, Dr Debreczeni undertook to overturn this consensus by isolating a molecule, which could suppress the effects of oncogenic Ras mutations by interacting with the inactive form. The team screened a library of molecules known as DARPins until they discovered one, DARPin K27, which blocked inactive Ras from acquiring GTP and becoming activated. For comparison, they also isolated a second molecule, DARPin K55, which follows the traditional approach of blocking activated Ras from interacting with its downstream partners.

Way leads on to way
The team showed that DARPin K27 could bind to both mutant and wild-type Ras proteins as efficiently as DARPin K55 and other existing Ras-interaction inhibitors. DARPin K27 binding reduced the activity processes regulated by Ras, and it reduced the growth of colorectal cancer cells as effectively as DARPin K55.

To clarify precisely how DARPin K27 interferes with Ras activation, the team crystallised the Ras-DARPin complex and used the I03 and I04 beamlines at Diamond to deduce its structure through X-ray crystallography. They found that K27 binds to Ras in a manner similar to the protein which normally attaches GTP; however, rather than exposing GDP for transformation to GTP, it locks Ras and GDP together, preventing Ras activation. “The crystallography results showed that DARPin K27 is bound to inactive Ras in a way that sterically clashes with the active form,” explains Dr Debreczeni. “It’s simply not possible for it to bind to the active form.” 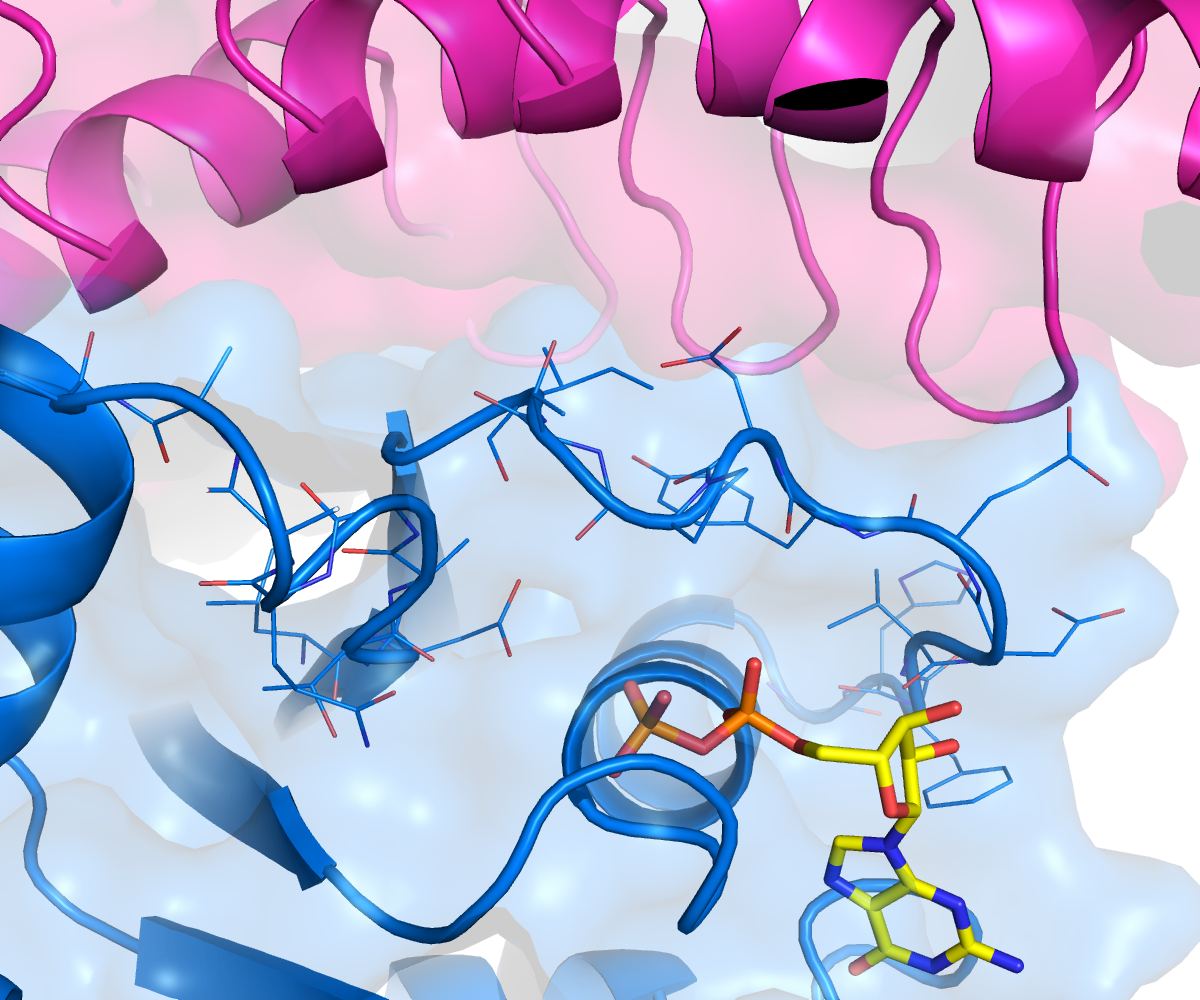 Figure 2:  A magnified view of the nucleotide binding site showing GDP (yellow) and the side chains of the switch loops of KRAS.

However, DARPin K27 is unlikely to find its way into cancer therapies. “This is absolutely a research tool and it was never really meant as anything else,” says Dr Debreczeni. The researchers hope that using these DARPins will help them probe different cancer cell lines and dissect the role of Ras and its partners, as well as further investigate the delivery of larger therapeutic molecules into target cells.

By providing an alternative approach to interfere with Ras signaling, this study broadens our ability to investigate Ras and its interactions. “There’s novelty in showing that we can modulate or shut down the pathway by binding to the inactive form,” says Dr Debreczeni, “but the elegance here is that we had two DARPins that bind with relatively the same affinity and manage to do the same thing, but the way they do it is completely different. One binds to the inactive form and the other to the active form. To me, that’s where the beauty of this work comes in.”

To find out more about the I03 or I04 beamlines, or to discuss potential applications, please contact Principal Beamline Scientist Dr Katherine McAuley (Katherine.McAuley@diamond.ac.uk) or Dr Dave Hall (David.Hall@diamond.ac.uk), respectively.