Catalytic production of methanol is an industrially important process and this high-energy density liquid is widely used in the manufacture of plastics and synthetic fibres, and in fuel cells. Currently, methanol is synthesized on a large scale using natural gas from an energy-inefficient process, which requires an endothermic, and therefore thermally intensive, step to completely break down the methane to CO/H2 before methanol can be formed. Scientists from the University of Oxford were keen to explore an alternative non-syn-gas route for methanol production utilising ethylene glycol (EG) which can be sourced from biomass.

A new catalytic system, Pd/Fe2O3, developed by the team shows promise with its high selectivity and more energy efficient conversion. However, the active sites responsible for the efficiency of this reaction, and the exact role played by the Pd and Fe components, have not been identified. The extremely small size of Pd-containing particles on the surface of the iron oxide prevented analysis using diffraction techniques. 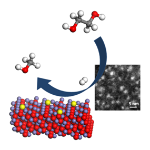 The researchers teamed up with Diamond scientists to perform Extended X-ray Absorption Fine Structure (EXAFS) measurements at the Pd K-edge. They investigated both the local structure of the  Pd/Fe2O3 catalyst and the Pd particle size before (poor CH3OH selectivity) and after extensive reduction (good CH3OHselectivity). EXAFS measurements do not require a crystalline sample and are sensitive to the element of interest, in this case Pd, allowing investigation of the very small particles. The EXAFS studies confirmed the formation and composition of ‘PdFe’ clusters.

These findings indicate that the reaction with ethylene glycol had induced small clusters of palladium and iron to form on the catalyst surface, and it was this chemical combination that produced active sites for this reaction. Knowing this will allow the researchers to further improve their catalyst to optimise its efficiency and specificity.

“This study demonstrates the first example of a route to make bio-methanol, converting biological molecules to make methanol.  That can then be blended into petrochemicals, and can be used for energy or can be used to make chemicals.  Our contribution here is, we can diversify all of those processes.”
Prof. S.C. Edman Tsang, University of Oxford 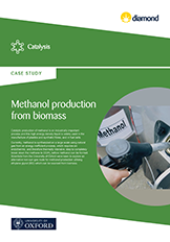