Fuel combustion in diesel engines leads to the production of nitrogen oxides (NOx) which are harmful to the environment. Retarding the fuel injection timing and recirculating the exhaust gas back into the engine reduces overall NOx emissions, however, this can also lead to the formation of diesel soot particles within the engine oil. Excessive build up of soot in engine oil accelerates engine wear, ultimately leading to lower fuel efficiency and premature engine failure.

Soot-related wear in engines can be improved by the use of specially designed copolymeric additives in engine oil formulations. Such copolymers disperse the soot in the form of nanoparticles within the oil and hence minimise wear. However, designing a suitable additive is technically challenging, as genuine diesel soot is expensive to generate. In view of this problem, carbon black is commonly used to mimic the behaviour of diesel soot in order to optimise formulations. A wide range of sophisticated analytical techniques is required to understand whether carbon black is actually a suitable mimic for genuine diesel soot in such formulation studies.

In partnership with BP scientists, an interdisciplinary academic team from The University of Sheffield has recently used Small Angle X-ray Scattering (SAXS) on beamline I22, in combination with other techniques, to investigate microstructural differences between carbon black and diesel soot particles dispersed in n-dodecane in both the presence and absence of copolymer additives. SAXS analysis showed that diesel soot dispersions in n-dodecane form relatively loose mass fractal agglomerates compared to those formed by carbon black particles and SAXS also provided indirect evidence of copolymer adsorption on both types of particles.

Depending on the precise nature of the copolymer dispersant additive, carbon black can be either a good mimic or a bad mimic for diesel soot particles. These differences are attributed to the differing surface chemistries. Nevertheless, certain grades of carbon black can be useful mimics for understanding the behaviour of specific types of diesel soot. The correct choice of carbon black grade is critically important if this model colloidal substrate is to be used as a mimic for diesel soot in formulation studies.

“We are indebted to the Diamond Light Source for granting beam-time access for this industrial project. Synchrotron SAXS is an extremely powerful analytical technique for the characterisation of a wide range of soft matter and it has been instrumental in all four of the scientific publications that have resulted from this very fruitful project. The PhD student who performed this work, Dr. David Growney, has now graduated and works in the engine oil industry as an employee of Lubrizol.” 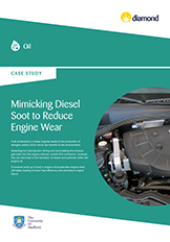