Humans have been using magnetism for around 2000 years, starting simply with the naturally occurring magnetic mineral lodestone and developing increasingly complex magnetic technologies. The modern world relies on magnetic data storage devices; when we save photos to the cloud, they're held in giant warehouses of hard drives. These technologies - and the magnets that cling to our fridges - are based on ferromagnetic materials, in which the magnetism in individual atoms tends to align in the same direction, creating a measurable stray magnetic field. However, ferromagnetism has a twin called antiferromagnetism. In antiferromagnetic (AF) materials, the individual atomic magnetism is arranged in two groups in opposite directions, effectively cancelling each other out, meaning that no measurable stray magnetic field is produced. We've been developing our understanding of antiferromagnetism since the middle of the 20th century, and AF materials have found some limited applications. They tend to be cheaper and more abundant than ferromagnetic materials, can be manipulated more quickly and are not affected by external magnetic fields that can wipe data from traditional hard drives. However, they are challenging to manipulate and control. A team of researchers from the University of Nottingham, working in close collaboration with Diamond's I06 beamline, has been investigating the relationship between structural defects and magnetism in the metallic antiferromagnet CuMnAs. Their results, recently published in two papers in Nature Communications and Science Advances, bring us a step closer to solving the problem of control and unlocking the potential of antiferromagnetic materials. 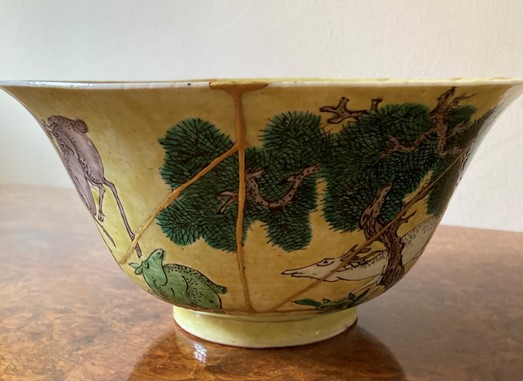 Figure 1: Ceramic bowl reassembled using epoxy and gold paint to celebrate the cracks that formed after a break as an integral part of the beauty of the bowl.

Decades of extensive research have given us a thorough understanding of magnetic domain formation in ferromagnets. However, their formation in AF materials is largely unexplored. Design concepts for devices using AF materials assume an ideal, but previous imaging has revealed structural defects that could affect their magnetic properties. In CuMnAs thin films, elongated microtwins and atomically sharp anti-phase boundaries are the most prominent defects. In our everyday lives, we see defects as a nuisance to be resolved or avoided, but defects can also be seen as imperfections that are fundamental to the makeup of any object. In the Japanese art of Kintsugi, defects are celebrated and pottery is repaired to emphasize cracks and chips as part of the history of a vase or plate (see Figure 1).

In this work published in Nature Communications, the team investigated the consequences of nanoscale structural twin defects in CuMnAs thin films, which develop across the entire thickness of the film and dominate the AF domain structure.

The intense polarised X-ray beam on I06 can be focused to a spot several microns in diameter, allowing X-ray photoelectron emission microscopy (PEEM) to probe nanomagnetism and nanostructures. Using I06, the team were able to image the AF domain structure using high-resolution PEEM combined with X-ray magnetic linear dichroism (XMLD). Combining X-ray Linear Dichroism (XLD) with PEEM also highlighted the presence of defects in the crystal structure.

The results demonstrate that microtwin defects determine the location and orientation of domain walls in CuMnAs thin films, emphasising the crucial role of nanoscale crystalline defects in determining the AF domains and domain walls. The defects are an integral part of the CuMnAs thin film and influence the AF structure of the film to such an extent, that extremely long and narrow domain walls can be formed in their presence.

Dr Peter Wadley, from the University of Nottingham, says:

We've developed our techniques in parallel with the I06 staff developing the beamline's facilities, and that shows - the best images I've seen of this metallic antiferromagnet have come out of our collaboration with Diamond. The I06 team go above and beyond in terms of customising the equipment to meet our requirements, including adding custom-built electrical switching boxes so that we can quickly and efficiently experiment with electrical control.

The team's XMLD-PEEM studies of CuMnAs thin films found changes in the lattice structure that could only be explained by the presence of another type of defect, too small to be resolved by this technique. To get an atomic-level view of the structure, they collaborated with researchers in the Czech Republic experienced in the use of differential phase contrast (DPC) STEM imaging.

Using this combination of techniques, we've been able to clearly correlate the physical structure and magnetism of this AF material and show just how intimately connected they are. And we've imaged a type of magnetic structure that hasn't been seen before and, in fact, is quite counter-intuitive. We've seen that it is at least quasi-stable, and that's really interesting from a fundamental point of view, as well as providing a potential new avenue for building devices.

Diamond works closely with its user communities to develop world-class facilities. One of the things I06 was designed to do, from its conception, was to allow us to develop a far deeper understanding of antiferromagnetism and its potential applications. The lead author on the Nature Communications paper is Sonka Reimers, a student working as a joint PhD student with Diamond and the University of Nottingham spintronics group. Close collaborations like these really drive Diamond's capabilities to new levels. Together we deliver unprecedented insights into the next-generation of materials.

The team at the University of Nottingham are already trialling some prototype AF devices. One of the exciting properties of AF devices is that they are non-binary - they can be switched to occupy different states. A working prototype is being used to monitor occupancy levels in car parks. AF devices also function more like neurons in the brain than traditional digital devices, which means they could be used to create "neuromorphic" devices in the future.

What we're doing here is fundamental research, but if we can achieve the right level of control of these atomically sharp defects, there's the potential for that to lead to next-generation devices relatively quickly.

To find out more about the I06 beamline or discuss potential applications, please contact Principal Beamline Scientist larissa.Ishibe-Veiga@diamond.ac.uk