Investigating how bee eyes adapt to their visual environment

Most insects, including the pollinators our crops need, rely on collecting and processing detailed visual information from their environment. However, the optics underlying compound eyes impose a trade-off between sensitivity and resolution, and each species has evolved eyes optimised for its environment. Using high-resolution synchrotron techniques, researchers can now capture detailed information about insect eyes and correlate it with environmental data. Their research can help us understand which species may be threatened by climate change and habitat loss and conserve species at risk. It also adds to our fundamental understanding of animal eyes. Working closely with the Diamond Manchester Imaging branchline (I13-2), an international team of researchers has developed micro-CT imaging techniques for these tiny eyes and a new computing method to analyse the wealth of data produced.

The perfect fit: evolution chooses the right eye for each environment 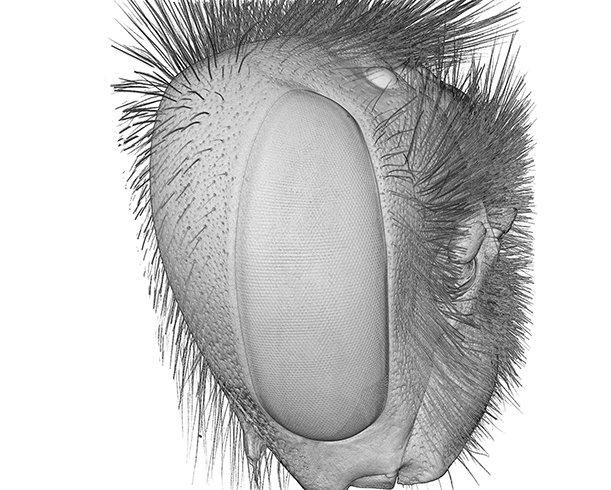 When you're being plagued by mosquitos or ants have invaded your kitchen, it's easy to wish for a world without insects. However, the worldwide decline in insect species isn't good news, it's extremely troubling. That's because insects aren't all pests; they are a vital part of healthy ecosystems. Many birds, amphibians, fish, and reptiles rely on insects as their primary food source. We rely on insects to pollinate our food crops, and other species play a key role in returning nutrients to the soil.

Insects are the largest group of Arthropods, invertebrate animals with segmented bodies, pairs of jointed appendages, and an exoskeleton. More than 80% of animals on Earth are arthropods, and many rely on vision to forage for food, track down mates or evade predators.

Most arthropods have two compound eyes, made up of repeated units called ommatidia. The visible facets on the external surface of the eye are lenses; ommatidia also typically have a crystalline cone and a light sensor called a rhabdom. Each ommatidium collects light from a small portion of the visual field. Added together, these generate detailed and colourful images.

Dr Emily Baird at Stockholm University leads a team of researchers investigating how the visual capabilities of insect species correlate with their environment. She says,

A larger lens lets in more light, but reduces the resolution. So each insect species faces this trade-off between being able to see at lower light levels or to see fine detail. The needs of each species vary according to their environment. For example, there's a bee in the Arctic that has evolved to fly above the tree line - a very bright, uncluttered environment - to spot flowers that bloom low to the ground. But bees that live in meadows fly much lower and are looking for flowers with a different region of their eye. And in those meadows, you'll find bees that forage when the Sun is high in the sky, and others that fly in lower light conditions. Detailed 3D scans tell us how each eye is optimised, and how that correlates to that insect's environment.

Knowing more about the diversity of arthropod eyes can tell us a lot about how insects interact with their environment and even offer insights into how each species will be affected by climate change. However, with insect eyes only around 1 mm in diameter, and each facet clocking in at about 20 microns, a powerful imaging technique is needed to get a good look at the whole eye and to determine properties such as the elongation axes of crystalline cones and the diameters and lengths of rhabdoms.

Dr Baird and her team have been working with scientists on I13-2, the Diamond-Manchester Imaging branchline, to develop 3D X-ray microtomography (micro-CT) techniques to examine insect eyes. Some of their previous research includes investigating bumblebee eyes to see how the variation in eye size across different species affects visual capabilities. (It turns out that Bigger is better for bumblebee eyes.)

More recently, the team have been addressing the lack of information on the eyes of tropical bee species. There are marked differences in environmental conditions between tropical and temperate regions, different flower species and different seasonal variations. Adding to our knowledge of the visual ecology of bees also increases our fundamental understanding of animal vision generally.

Bees are wonderful animals to work with. They're social, so they have to learn to navigate around their environment and return home with food for the colony. They need to learn which flowers are good food sources, and that changes with the time of day and the season. So they learn and store amazingly complex information in a brain volume less than a cubic millimetre. In our next trip to Diamond, we're going to be scanning butterfly eyes. Butterflies are foraging in similar environments to bees, but they aren't social and they don't have a home base, so they don't navigate in the same ways. These two types of insects have the same compound eyes, but they're not closely related. We're excited to see how butterfly eyes are adapted to their visual environment, and how that correlates with the data we have on bees. 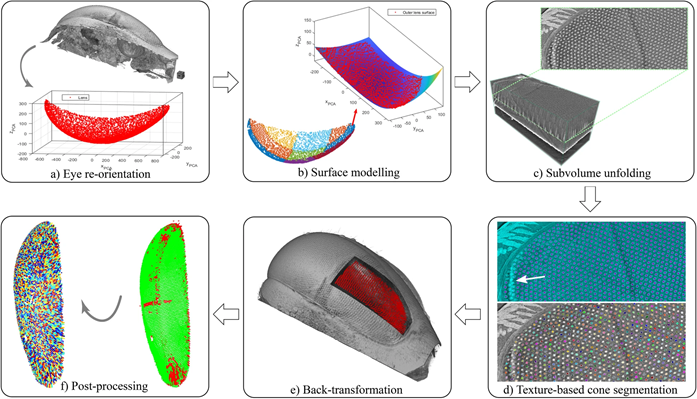 Outline of the process to automatically segment crystalline cones. The method is illustrated with images of Apis mellifera as an example. [The voxel size of the bee eyes was 1.6 μm]. (a) Reorientation of the eye (volume rendering) and the labelled external cornea (red) into the ‘PCA space’. (b) Division of the cornea surface voxels into subregions (each plotted with a different colour) and modelling of each subregion using polynomial fitting in its ‘PCA space’ (top). (c) Extraction and unfolding of a subvolume of the eye data. Note that the cornea surface in the unfolded subvolume is almost flat, so that the pattern of crystalline cones in the cross-section is regular. (d) Auto-segmentation of the raw cones using a texture-based approach. The results of this step are displayed on one slice from the unfolded images (top) and in the whole eye subvolume (bottom). The white arrow indicates the location of a circular artefact that locally prevented the segmentation of a few cones. (e) Back-transformation of the raw auto-segmented cones into the original eye volume (3D rendering). (f) Post-processing of the raw cones labels (right subfigure) to eliminate noisy detections (red on the right subfigure) and retain valid cones (green on the right subfigure - left subfigure).
Image reused from DOI: 10.1186/s40850-021-00101-w under the CC BY 2.0 license.

The team's research has shown that micro-CT is a promising method for generating fast and accurate 3D models of an eye. It keeps the eye geometry intact, an advantage over 2D methods, which lose part of the geometrical information through the physical sectioning process. In addition, micro-CT offers a high level of detail about the geometry of the crystalline cones and, to some extent, of the rhabdoms, which was not available using previous modelling approaches. However, processing and analysing the high volumes of data produced is difficult. The team have therefore developed a new computing method called InSegtCone, which uses auto-segmentation to reduce the need for manual user input.

InSegtCone dramatically accelerates time-consuming labelling, thus enabling comprehensive studies across many arthropod eyes, which had not been practical before. It should also be possible to expand the use of

InSegtCone beyond the study of compound eyes, inspiring projects in a wide range of fields that require tools to segment repeated elements in a 3D layer.

To find out more about the Diamond-Manchester Imaging branchline (I13-2), or to discuss potential applications, please contact Principal Beamline Scientist Christoph Rau: christoph.rau@diamond.ac.uk