Can you bee-lieve it?

Diamond has undertaken lots of other research on bees, too! Learn more about:

How orchid bees navigate through the depths of the rainforest:

Finding out what a bee sees:

Bigger is better for bumblebee eyes

Bumblebees buzzing around flowers is one of the sounds of summer, and these insects are important pollinators, particularly in northern Europe. Like all bees, they have to visually navigate complex environments in search of nectar, but although extensive research has been done on honeybees, telling us more about how their tiny eyes work and how they process and learn the visual information necessary for this, we know less about bumblebee eyesight. In work recently published in eLife, researchers demonstrated a new X-ray microCT-based method for quantifying and mapping the vision capacity of insect eyes. After creating 3D models of the compound eyes of buff-tailed bumblebees (Bombus terrestris), they were able to project the surface of each eye onto the world and to map the scaling relationships of eye properties and visual capabilities for bumblebees. Their results showed that larger bumblebees with bigger eyes have better vision, with an improved ability to see small objects in front or slightly above them, and their research may have identified general rules for how compound eyes scale with size.

What an animal sees... and why

Bumblebees come in a range of different sizes, with larger bumblebees known to have larger eyes. Bigger eyes are generally thought to be better, but it’s not entirely clear how eye size affects vision. For example, little is known about how optical sensitivity and visual resolution across a bumblebee’s entire visual field are affected by its eye size. Insects are good models for exploring the effects of size on visual systems, as many insect species exhibit size polymorphism, but previous research has been limited by difficulties in determining the 3D structure of eyes.

Any animal’s vision is restricted to objects in its visual field, which is the total angular region of the environment from which photoreceptors in the eye can receive light. Spatial resolution (which allows an animal to detect specific objects within this visual field) is provided by individual photoreceptors, which sample the spatial distribution of light. As increasing spatial resolution means sampling light from smaller regions of space, increasing resolution reduces the amount of light captured - the eye’s sensitivity. In order to optimise vision, the density and properties of photoreceptors often vary across the eye; in human eyes, for example, we have high-resolution vision over a small area of space, and lower-resolution ‘peripheral’ vision over a larger visual field. Visual specialisations in other species include ‘bright zones’ of high sensitivity for spotting prey or potential mates against a bright background and specially elongated regions of acute vision for detecting the horizon. If we can accurately determine the different visual capabilities across an animal’s entire field of view (FOV), we can therefore infer important information about the animal’s environment and its visually-guided behaviours.
Researchers at Stockholm University and Lund University in Sweden, working with colleagues from Germany and the UK, developed a new technique combining computer-assisted tomography and very high-resolution imaging, which allowed them to generate 3D images of the compound eyes of buff-tailed bumblebees, showing how and what they see in various parts of their field of view.
Diamond Senior Support Scientist Dr Andrew Bodey noted:

The high-throughput, high-contrast, high-resolution 3D imaging at I13-2 enabled high-quality data to be generated for a large number of samples in just a few days.

Allometry and the bumblebee 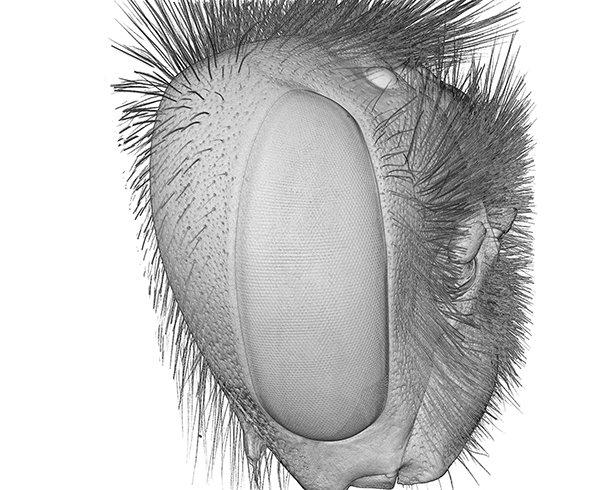 The team were working with a hypothesis that the compound eyes common in insect species were likely to scale non-uniformly, with an increasing proportion of a larger eye given over to improving vision in a small area of the FOV. To test whether specialised visual regions are developed or improved in larger individuals, they needed to link the allometry of eye properties - the growth of different areas at differing rates, leading to a change in proportions - to visual capabilities.

By linking points on the eye to their projection into the environment, the team are able to compare vision between species and even different taxa such as butterflies and flies, and also understand how an eye samples information and what effect this has on visually-guided behaviours including foraging and mating.
In this study, they explore the effect of size on the visual capacity of buff-tailed bumblebees, by comparing the eye structures of individuals of different sizes. They used X-ray microtomography performed at the Diamond-Manchester Imaging branchline (I13-2) , to measure the 3D structure of the compound eyes, then used those measurements to build 3D models of the eyes. By using computational geometry, they were able to calculate the sensitivity, acuity and viewing direction across the surface of each model eye. The novel technique they developed allowed the researchers to map eye properties and visual capabilities onto common, world-referenced coordinates.
Although bumblebee eyes have not been well researched, extensive behavioural, anatomical and physiological studies have been carried out on honeybee eyes, and so the team also used their technique to examine the eyes of European honeybees (Apis mellifera) to validate their new methodology and for comparison against their bumblebee data.
Their results show that bigger bumblebees with larger eyes have better vision, with an improved ability to see things in front of or slightly above them. They had a higher sensitivity to light across the whole eye, and a larger overlap in sight between both eyes. These improvements are likely to help larger bees adapt to their environment. Moreover, the key features that the team identified in how bumblebee eyes scale with size may represent more general rules for compound eyes in other species.
Professor Emily Baird of Stockholm University explains how Diamond is vital to this important research:

By giving us a deeper understanding of how bumblebees perceive the world, this research can help us to better understand the pollination behaviour of bees in general and may aid in the development of more efficient strategies for conserving threatened species. Beamline I13-2 at Diamond has helped us to develop and refine our methodology and has been fundamental in making this work possible

To find out more about the Diamond-Manchester Imaging branchline (I13-2), or to discuss potential applications, please contact Principal Beamline Scientist Christoph Rau: christoph.rau@diamond.ac.uk.

What does a bee see? Elucidating the visual world of bees using X-ray microtomography