Diamond is making a significant contribution towards developing therapies for Alzheimer’s disease and other cognitive conditions. Two recent studies have increased our understanding of the complex disease processes that lead to the development of degenerative brain disorders and provide hope for future therapies that could slow or even prevent these debilitating conditions. Both studies focused on the accumulation of different proteins in the brain which have been associated with many different neurodegenerative diseases.

The first study uncovered the previously unknown role of the protein S100B in limiting the damaging impact of tau protein aggregation in the early stages of AD. The second has solved the crystal structures of key antibodies which bind to the amyloid-beta (Aβ) protein (also associated with AD) and opens new ways to manage the disease. 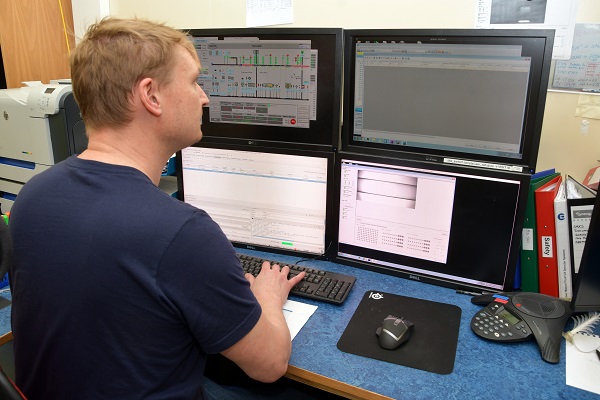 Principal Beamline Scientist Nathan Cowieson in the Control Cabin of beamline B21.

Accumulation of various proteins in the brain is a key factor in many neurodegenerative disorders. One of these proteins is tau which plays an important role in the assembly and stabilisation of the microtubules responsible for cell growth, movement and signalling in all cells.

Impaired interaction of tau protein with microtubules results in deposition of tau in the brain which is associated with various types of dementia and cognitive symptoms and the worsening phase of Alzheimer’s disease. Accumulation of tau is also associated with sustained neuroinflammation resulting in the release of inflammatory mediators including the protein S100B.

S100B is found at high levels in the brain and increases with aging, traumatic brain injury and AD. An international research team led by Professor Claudio Gomes previously found that S100B acts as a chaperone to counteracts amyloid-beta aggregation and the toxicity of amyloid in early disease stages.1 The team suggested that S100B may also that it may have the same effect on tau.

Structural analysis during the study using small angle X-ray scattering on beamline B21 at Diamond showed the dynamic interactions between tau and S100B. The research team commented that,

S100B has intra- and extracellular activity as a chaperone counteracting tau aggregation and seeding.

The study unveils a new biological protection mechanism which is particularly relevant in the early stages of disease but becomes less effective as toxic deposits build up in the brain. This new evidence for the early neuro-protective functions of S100B as part of the body’s inflammatory responses in tauopathies may provide further routes for scientific research into the causes and treatments of neurodegenerative diseases.

Developing a vaccine against Alzheimer’s disease 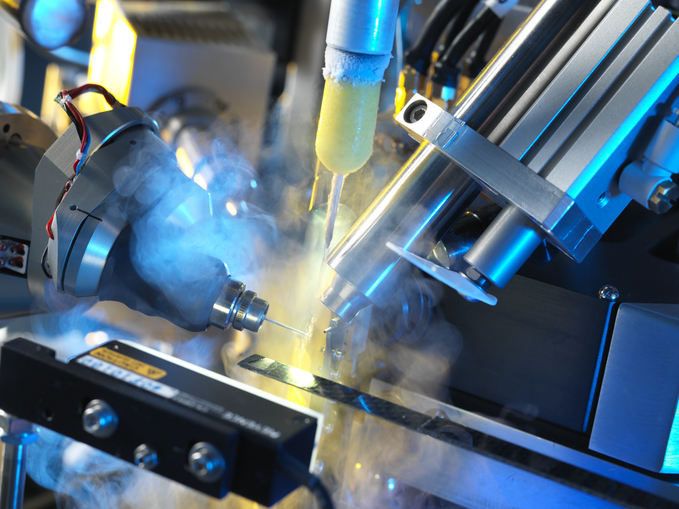 Close-up of the sample mount on beamline I04.

Another hallmark of AD is the deposition of amyloid-beta (Aβ) protein in plaques in the brain. The Aβ peptide exists in several forms which play a major role in neurodegeneration. A joint team of researchers from Germany and the UK identified a novel structure in the N-terminal region of Aβ bound to the TAP01 family of antibodies using macromolecular crystallography on beamline I04 at Diamond. This novel, pseudo β-hairpin confirmation had not been described in the literature before and was shown to underpin its unique binding properties.

The team were then able to engineer a stabilised form of the N-terminal Aβ1-14 peptide which they termed the TAPAS vaccine (N-Truncated Amyloid Peptide AntibodieS) with the same 3-dimensional conformation as the native sequence when bound to the antibody. Use of this novel vaccine in a mouse model led to several significant benefits, including a significant reduction in amyloid plaque formation, improvement in brain glucose metabolism, stabilisation in neuron loss and a rescue of memory deficiencies.

The researchers concluded that,

The positive therapeutic outcomes from active immunisation with cyclic Aβ1-14 as well as the passive immunisation with the clinical lead candidate antibody (a humanised variant of TAP01) suggest the potential for a vaccine to protect future generations from this terrible disease.

These important studies form part of the exciting progress being made in understanding the disease processes leading to neurodegeneration and may provide therapeutic solutions for AD and many other conditions in the future.

To find out more about the B21 beamline or to discuss potential applications, please contact Principal Beamline Scientist Nathan Cowieson: nathan.cowieson@diamond