The design of artificial viruses that target bacterial membranes

A new type of antimicrobial agents is on the horizon following the design of artificial mini-proteins that self-assemble into viral-like spheres known as capsids whose properties were characterised using the Circular Dichroism beamline (B23) at Diamond Light Source. As shown in Nature Communications, the artificial viruses punched holes in bacterial membranes to rapidly kill them. 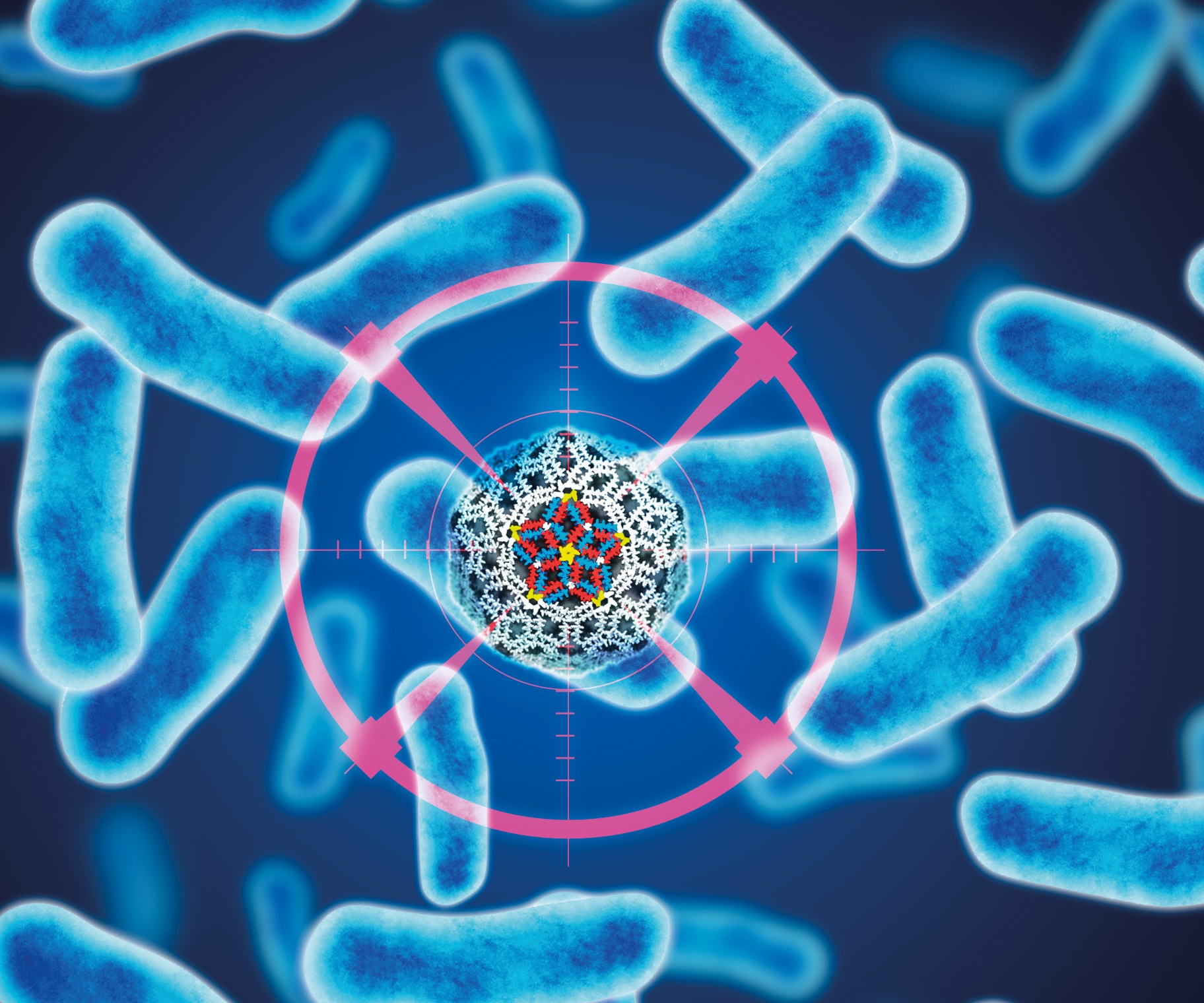 Antibiotic resistance has become an ever-growing global challenge. Antibiotic discovery has not kept pace with the emergence of resistant forms of bacteria, with traditional methods of discovery being exhausted. Recognising the promise that biological design and metrology could offer to address this global problem, a team of researchers from the National Physical Laboratory and University College London engineered a first-in-class artificial virus that kills bacteria on touch.

The artificial viruses were made from host-defence proteins, and constructed using the same geometric principles that naturally occurring viruses use to build their coats to form polyhedral capsids. Mimicking the way viral capsids are made allowed the artificial viruses to be carefully designed as a 20 nm sphere which, upon encountering bacteria, rapidly blast through their cell wall with lethal effect.

In contrast to a traditional antibiotic, which must reach a single target in a bacterial cell, the artificial viruses tackle a bacterial cell as a whole, starting with the disruption of its most vulnerable part, the cell membrane. This mechanism of action means that bacteria may be less likely to become resistant, leading to potentially more effective antimicrobial treatments.

Burgeoning threat of resistance
Antibiotic resistance is a growing threat to the world, with conventional antibiotics rapidly becoming ineffective against a tide of resistant bacteria. To improve the outlook for the future, a new generation of antibiotics are urgently needed.

A team of scientists based at the NPL and UCL who have a long heritage in designing nanostructures decided to turn their efforts to the production of artificial viruses that attack bacteria. They previously saw that host-defence peptides could be engineered to self-assemble into viral-like spheres and realised that they could act as potent antimicrobial agents.

Dr Max Ryadnov, Science Area Leader in Biometrology at NPL, and principal investigator of the study described their intentions:  “Our lab is interested in the virus architecture and creating artificial forms of viruses that can be useful to us. We wanted to use this knowledge to create an alternative to antibiotics.”

Self-assembled capsids
The team made the artificial viruses from a small number of proteins that self-assembled into a polyhedral shell. The proteins were made from scratch based on sequence patterns that were known to be antimicrobial. These proteins were mimetics of host-defence peptides that naturally assemble into pores once they enter a bacterial membrane. Cleverly the team designed their similar proteins to self-assemble prior to a bacterial encounter so that they could skip this step.

There were two types of proteins that the team used for constructing the viruses, one was a triskelion termed as C3 and the other was a linear peptide, which was added to neutralise the antimicrobial effect of the first one. This ensured the assembled virus was not primed until it found a bacterium, whereupon it re-assembled in the bacterial membrane losing the neutralising peptide.

The artificial viruses were visualised using cryo-transmission electron microscopy, and circular dichroism at Diamond’s B23 beamline was used to characterise the biophysical properties of the protein components. “Circular dichroism using synchrotron radiation can tell us how the viral proteins co-assemble allowing us to tune and optimise the resulting capsid structure,” explained Dr Ryadnov.

Irreparable hole in bacteria
The team found that their novel viruses form irreparable holes in membranes causing the bacteria to leak or burst completely. The artificial viruses exhibited potent activity against a panel of pathogenic bacteria including: S. aureus, E. coli, K. pneumoniae and P. aeruginosa.

In addition to their rapid antimicrobial activities, the viruses also have the ability to carry genetic material to transfect living cells to facilitate cloning or carry out other biological applications. This dual ability makes them an attractive tool for biological research.

The team intend to continue to work with these types of artificial viruses and have already gained some promising preclinical results, which they hope to translate into clinical trials in the future. In the meantime, they are continuing to design viruses to increase their efficacy and they also plan to test their activity against pathogens other than bacteria such as membrane-containing viruses (e.g. HIV).

To unlock the full potential of these viruses, the NPL will develop a toolbox of synthetic biomaterials. “We plan to create a suite of reference materials such as transfection agents, extracellular matrices, reporters for cell reactions and gene expression and those materials can be offered as an open-source toolbox for industry,” confirmed Dr Ryadnov.

To find out more about B23, or to discuss potential applications, please contact Principal Beamline Scientist Dr Giuliano Siligardi: giuliano.siligardi@diamond.ac.uk