Finding out the nanoscale properties of human telomeres

X-ray fluorescence measurements on the Microfocus Spectroscopy beamline (I18) at Diamond Light Source has helped to reveal the biophysical properties of telomeres, which are important sections of DNA that cap the ends of chromosomes. The study, recently published in ACS Nano, demonstrated that a single unique gold-based probe could be used with two biophysical techniques to characterise telomeres.

Telomeres are short stretches of DNA that reside at the end of chromosomes. They are critical for protecting the integrity of DNA and controlling how a cell ages, and intriguingly their length and volume can inform not only the age of a cell, but also certain disease states. Despite their importance, a lack of adequate probes has hampered the investigation of their biophysical characteristics.

Scientists from the University of Exeter with the expertise of Dr Tina Geraki from Diamond applied a bespoke gold nanoparticle-fluorescent probe to analyse the properties of telomeres using both X-ray fluorescence and super resolution microscopy. The dual purpose probe estimated that telomeres with an average length of 10 kbps had a diameter of 60–300 nm. Imaging telomeres, or in fact any parts of chromosomes, in this way could be a hugely important development in the field of disease diagnostics. 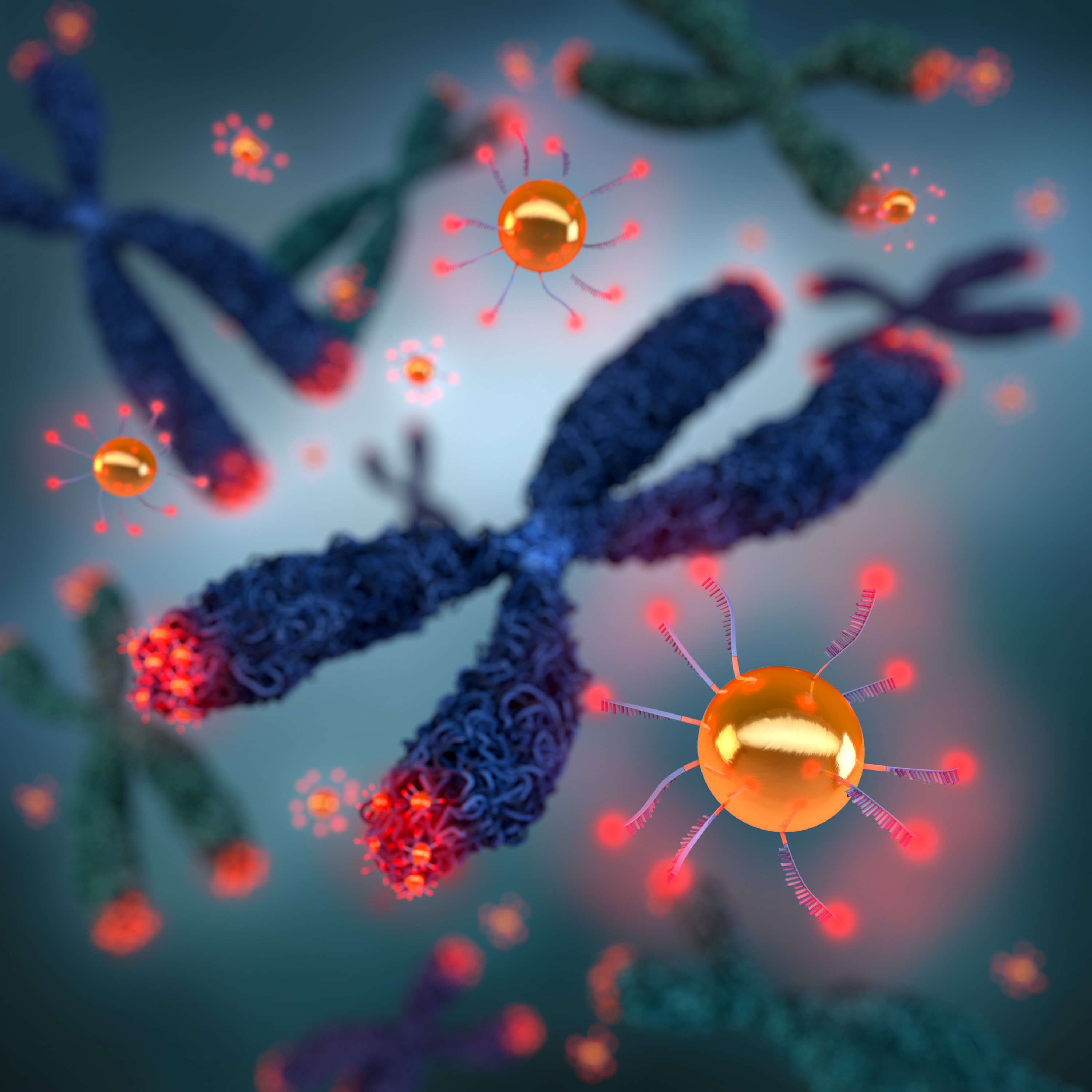 Regulation of cell aging
Telomeres are repetitive genetic regions at the end of chromosomes that are essential for maintaining the integrity of chromosomes. However, upon each round of replication, a few base pairs are lost, so the telomeres are shortened. The length of telomeres is related to the age of a cell and once telomeres reach a critical length a cell enters a period of dormancy known as senescence. As well as length, the volume of telomeres is also important as compacted telomeres are believed to be protected from the onslaught of degradative enzymes.

Even though telomeres are the protectors of our chromosomes, past technology has limited their visualisation. The diameter of a telomere is below the diffraction limit of light so conventional microscopy is not of a high enough resolution. Dr Charlie Jeynes, Wellcome Trust Research Fellow at the University of Exeter set out to address this shortcoming in telomere characterisation. “We wanted to know if we could use biophysical techniques to study the nature of the telomere and find out how it regulates cell aging,” he explained.

The length of telomeres was measured by calculating the number of gold nanoparticles that had attached to them using X-ray fluorescence at I18. The fluorescent part of the probe determined the diameter of telomeres, which was achieved with the application of super resolution microscopy, using a technique called direct stochastic reconstruction optical microscopy (dSTORM).

The probe was tested on DNA samples from human cells to check its performance. “We treated cells with a drug that artificially shortens their telomeres and then we used super resolution microscopy to show that you could tell the difference between treated and untreated cell,” stated Dr Jeynes.

The gold nanoparticle probe successfully served its dual purpose, determining that telomeres with an average length of 10 kbps had a diameter of 60–300 nm. Dr Jeynes admitted that there were some setbacks along the way: “Our gold probe with the X-ray fluorescence didn’t give us quite the signal that we were expecting, but it was still interesting as a prototype proof-of-principle.”

Due to the unexpectedly low signal with X-ray fluorescence, Dr Jeynes plans to improve sensitivity by designing a new probe with a smaller gold nanoparticle which will be able to penetrate deeper into the telomere space. He also plans to run a series of experiments on cells with compacted telomeres versus cells with normal telomeres, and may even turn to cryo-EM in the future.

“The principles and process that we set out in this paper could eventually have applications in pathology labs, maybe looking at other genes where the biophysical characteristics of a gene has a pathological consequence,” concluded Dr Jeynes. Indeed, the ability to apply a probe to monitor the biophysical properties of genes could have huge ramifications for the diagnosis of an array of genetic diseases, including cancer.

To find out more about I18, or to discuss potential applications, please contact Prof Fred Mosselmans: fred.mosselmans@diamond.ac.uk