The encasing of proteins in silica to improve their thermal stability

Scientists have unveiled a novel technique, ensilication, for improving the storage of proteins, such as vaccines and antibodies. The study, detailed in Scientific Reports, showed that by trapping proteins in a silica cage, they could be protected from denaturation at room temperature, while retaining their structure and function.

The transportation of biopharmaceuticals can be a logistical headache. A ‘cold chain’ is needed, constant refrigeration throughout the transit, and breaks in this chain are a particular threat to vaccination programmes in developing countries. New strategies are urgently needed to facilitate the distribution of temperature-sensitive medicines, which will help us to get rid of continuous refrigeration.

A team of scientists took inspiration from marine diatoms - organisms, which secrete an enzyme building silica shell to sound their bodies for protection from the environment. In the same fashion, scientists apply silica coating on a variety of proteins and this coating prevents the protein from unfolding. The proteins are encased in ‘silica cages’ and subjected to high temperatures and prolonged storage times to test the limits of stabilisation and protection acquired by the silica application. Circular Dichroism (CD) at the dedicated B23 beamline at Diamond Light Source and an array of other techniques were used to assess the structure and function of the stored proteins.

Amazingly, ensilication shielded the proteins from the harmful effects of heat treatment and long-term storage at room temperature. The proteins did not need to be refrigerated to prevent degradation, as the silica preserved their structure and function. This new storage method could revolutionise the transportation and storage of medicine worldwide, making them more accessible to developing countries. 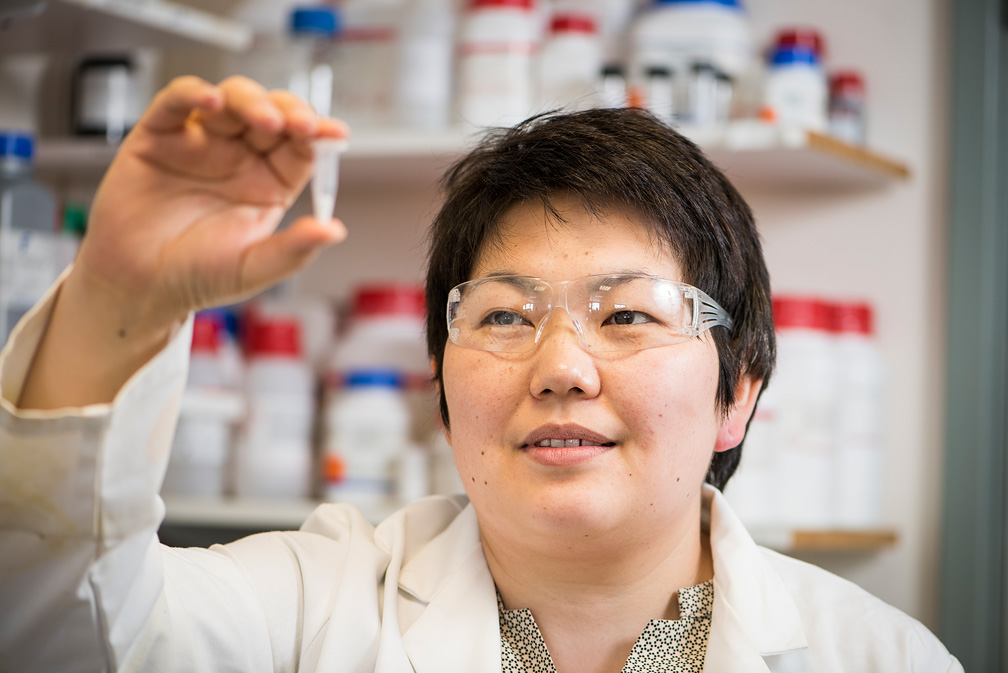 Cold storage
Biopharmaceuticals, such as antibodies and vaccines, must be transported and stored in cold conditions (2–8°C) in order to maintain their function. At room temperature, these proteins unfold and undergo denaturation, rendering them inactive. Although methods such as freeze-drying, biomineralisation and pegylation have been employed to preserve function, many vaccines cannot withstand such processes.

Dr Asel Sartbaeva, Lecturer at the University of Bath and lead investigator of the study outlined the objectives of the work, “We need to have thermally stable vaccines if we want to fight against diseases. We were not trying to make the proteins more stable; instead we wanted to preserve their function against temperature denaturation.”
Ensilicated proteins
Three proteins were studied by the team: hen egg white lysozyme (HEWL), horse haemoglobin and the tetanus toxin C-fragment, part of a DTP vaccine. The proteins were mixed with silica in solution and the resulting nanoparticles were allowed to grow prior to filtration. The samples were dried and the resulting powder consisted of silica nanoparticles with proteins inside.
To test this powder was subjected to heating up to 100°C and storage at ambient temperature for six months. The encapsulated proteins were released with the application of release buffer, chemically breaking the silica shell. The team suggest that while this way of release works well, it will not be the way proteins would be released for administration for patients. The team is working on an alternative release method where the silica shell would be broken down mechanically, not requiring any chemical additions.
Circular dichroism at Diamond’s B23 beamline was used to explore the secondary and tertiary structure of the proteins, to check if they had unfolded within the silica cage or upon release. A wavelength range of 180 to 260 nm was used with an integration time of 2 sec and a data interval of 1 nm. Biological assays were used to test protein functions and additional methods were used to check particle sizes and protein masses.
Thermally-stable shell
The process of ensilication took just a matter of seconds for the samples, but even including drying time and powder formation the entire technique only took a few hours. Yields were high too, however the ensilication method for each protein had to be tweaked, due to differing protein sizes.
The silica was shown to form a thermally-stable shell around the proteins, which protected them from unfolding. The silica bound to hydrogens on the surface of the proteins and although this interaction was very weak, it was sufficient to preserve structure and function even at 100°C. Additionally, the proteins were shown to retain their function after storage at room temperature for 6 months. One sample was even shown to be functionally intact after 3 years.
“In the short term, our aim is to apply this technique to as many vaccines as possible. In the future we hope to look at antibodies, antivirals and antibiotics – so all biopharmaceuticals” said Dr Sartbaeva. The team are actively looking for industrial partnership to advance the project and hopefully transform the way that medicines are globally distributed and stored.

To find out more about the B23 beamline, or to discuss potential applications, please contact Principal Beamline Scientist Prof Giuliano Siligardi: giuliano.siligardi@diamond.ac.uk