Probing the structure of the liquid state

Scientists have used facilities at Diamond Light Source to investigate the structure of a new form of metal-organic frameworks – those in the liquid state.

Metal-organic frameworks, commonly known as MOFs, are well-known for their well-ordered, crystalline and porous structure. As such interest has focused on solid forms of these materials. However, in a new study published in Nature Materials, chemists have turned their attention to liquid MOFs.

The team used the XPDF: X-ray Pair Distribution Function beamline (I15-1) at Diamond to probe the structure of a MOF in its glass state, from which they were able to infer the structure of its liquid form. They combined these measurements with others taken at the Advance Photon Source in Chicago and the ISIS Neutron and Muon Source, also on Harwell Campus to build up a full structural view of the liquid, despite its amorphous nature.

Unexpectedly their results show that even in liquid form the MOF retains porosity. The team say their work should encourage researchers to open their research beyond solid crystalline versions of these materials. 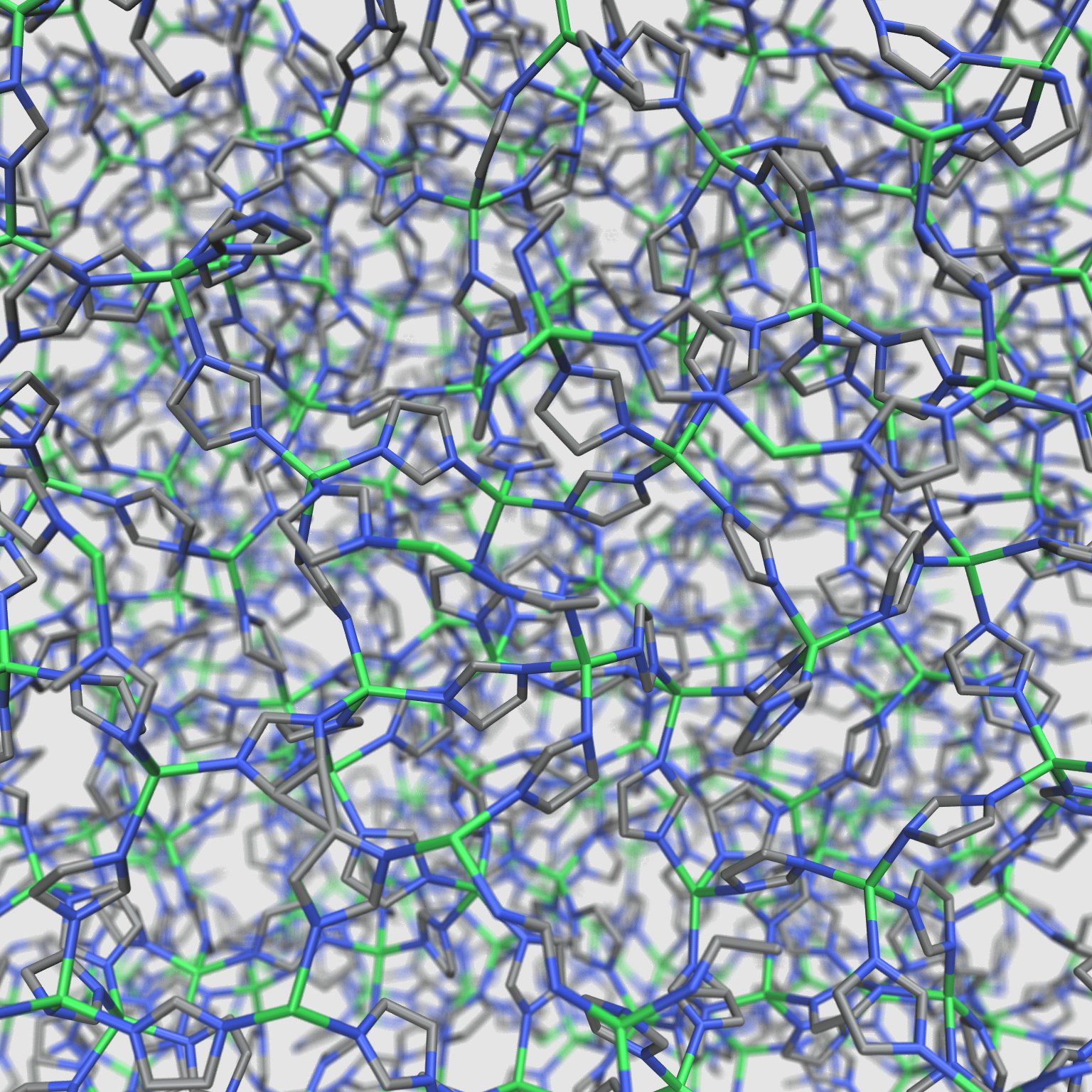 Crystal sponges
MOFs are crystalline materials that are of interest due to their porous nature, which enables them to accommodate guest molecules within their structure. There are around 60,000 known MOFs, with potential applications including the capture or separation of gases, catalysis and drug delivery.

“The field is heavily populated with people who synthesise MOFs and characterise their porous properties,” explains Dr Thomas Bennett, a Research Fellow at the University of Cambridge and joint team leader on the study. However, he and his team were interested in studying something more fundamental to these materials – specifically the state of matter.

Glasses and liquids
To date MOFs studied have typically been crystalline, ordered solids. But Dr Bennett and his team decided to investigate a different physical form of the material. They had previously synthesised an MOF in a glass state, leading them to believe that they should be able to produce liquid MOFs too.

For their study the team took an imidazolate MOF, Zn(Im)2 (Im, C3H3N2). They first used X-ray diffraction at the Advanced Photon Source in Chicago to study how the bonding and structure of the MOF changed at variable temperature – specifically when changing from a solid to a liquid. They then brought the cooled, glass sample to Diamond for further investigation, using the XPDF: X-ray Pair Distribution Function beamline (I15-1) to probe the MOF at room temperature.

The XPDF beamline gives researches the ability to study the local structure of crystalline, semi-crystalline and amorphous solids and liquids. The team combined X-ray measurements from Diamond with neutron measurements, taken at ISIS, to produce a model of the glass state from which they could infer the structure of the liquid MOF.

“Amorphous materials by nature are very hard to characterise,” says Dr Bennett. “We need the energy of X-rays that Diamond provides.” Thanks to the studies carried out at Diamond they were able to gain an insight into the structure of the amorphous state with a high level of detail.

Porous liquids
The team found that MOF retained porosity despite becoming a liquid. Computational studies showed that at 300 K the crystal demonstrated 74% porosity while at 1500 K the liquid demonstrated 95% porosity.

The researchers say this investigation has opened up many questions for the future. They are eager to determine whether many more MOFs behave in this way, as well as discovering what the properties and applications of the liquid state could be.

“The resounding message is for other researchers to look beyond the order and porosity in MOFs – and to think about different structures,” says Dr Bennett.

To find out more about the XPDF (I15-1) beamline, or to discuss potential applications, please contact Senior Beamline Scientist Dr Phil Chater: philip.chater@diamond.ac.uk