Researchers reveal the structure of a component of the bacterial shield

The Hsf protein found in virulent strains of the bacteria Haemophilus influenzae is thought to aid the pathogen avoiding our immune response, leading to diseases such as pneumonia and meningitis. In a paper published in Acta Cryst. F, Professor Adrian Goldman’s team at the University of Leeds used the Macromolecular Crystallography beamline (I03) at Diamond Light Source to determine the structure of a subdomain of Hsf known as PD1, revealing a structural component missed by computational predictions. Understanding the PD1 structure brings the team one step closer to uncovering the structure of the entire protein, which could then be used to design molecular antagonists that would block Haemophilus influenzae’s evasion of the immune system. 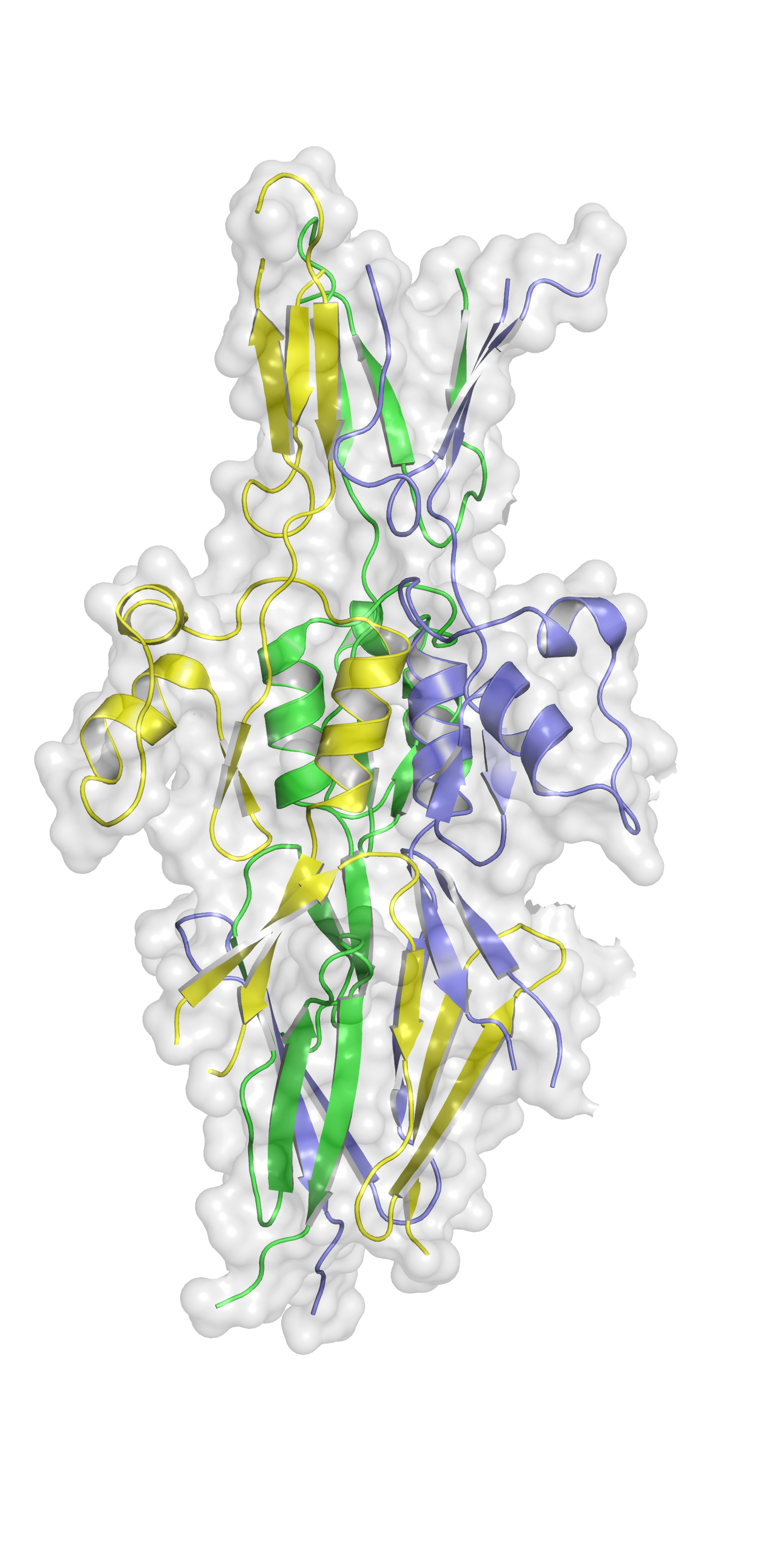 Figure 1: Haemophilus surface fibri PD1 showing its trimeric architecture and novel domain arrangement. The three subunits are coloured yellow, blue and green. (Credit: by Maren Thomsen)
Persistence pays
Haemophilus influenzae is an opportunistic pathogen that causes bacterial meningitis and respiratory tract infections such as pneumonia. Like many pathogenic bacteria, it deploys a suite of proteins to protect itself against its host’s immune system. Haemophilus surface fibril (Hsf) is one such protein, though researchers do not yet know its structure or precise function. A team led by Professor Adrian Goldman have been piecing together the structure of Hsf, combining analyses of fragments of the protein towards a description of the entire structure, from which they hope to identify binding sites and potential target molecules. One fragment, known as the PD1 domain, resisted their efforts for three years before a shift in strategy enabled them to recover crystals of the domain and solve its structure.
The breakthrough came thanks to the persistence of Jack Wright, then an undergraduate placement student in the Goldman lab. Since PD1 is only an isolated fragment of the protein, the team had been attaching it to a molecular scaffolding which would prevent the domain from unravelling, ensuring that it would be able to take its natural shape. Unfortunately, this stymied efforts to purify PD1; while the domain’s structure was preserved by the scaffolding, the anchored domains consistently aggregated, forming clumps rather than crystals. Faced with repeated failed experiments, Mr Wright decided to purify unsupported PD1, abandoning the scaffolding approach that had successfully led to crystals of 18 similar domains.  “It was his persistence and his willingness to try something different that gave the project the breakthrough it needed,” said Prof Goldman. “I told him it wasn’t going to work.” But it did.
An unexpected turn
With the crystals finally in hand, solving the structure of PD1 was within reach. The team used I03 at Diamond, collecting a single data set and analysing their findings by molecular replacement with standard software to determine the structure. To their surprise, they found a structural domain known as a TrpRing at both ends of PD1, though computational annotations had only predicted a TrpRing at one end of the protein.
The incorrect annotation was based on sequence alignment with a similar protein, Hia, although it now appears that the Hia sequence in the annotation database may have been incomplete, with a truncated TrpRing domain at one end. By revealing the short-comings of the sequence-based analysis, the structural analysis uncovered the correct structure of PD1, which will help the team create a more accurate model of the overall structure of Hsf.
“This also tells us how to break the protein into pieces for analysis,” said Prof Goldman. When dividing Hsf into subunits for analysis, the researchers need to ensure that the protein is not fragmented arbitrarily. “Now that we know about the TrpRing, we're in a better place to be able to break Hsf up into logical pieces. This will enable us to do further experiments properly, to get better data, which is what we want as scientists, of course.”

The PD1 structure is just one step along the road. The team are planning further experiments at Diamond and using cryo-electron microscopy to unveil the structure of the entire Hsf protein. This will enable them to determine how the protein presents on Haemophilus influenzae and which portion contains the binding site. Prof Goldman hopes to discover what immune molecules Hsf binds and find a way to interfere with this process. “Instead of trying to kill the bacteria, if we just prevent them shielding themselves from attack by the immune system, then the immune system will clean them up. That’s what I think the future of antibiotics looks like.”

To find out more about the I03 beamline, or to discuss potential applications, please contact Principal Beamline Scientist Dr Katherine McAuley: Katherine.McAuley@diamond.ac.uk