Diamond’s 4000th structure uploaded to the Protein Data Bank in Europe has shed light on the intriguing properties of uropathogenic Escherichia coli. A sticky subunit found at the end of one of its hair-like appendages was shown to latch onto inflamed tissue of the urinary tract and promote chronic infections. Understanding the structure and function of this critical protein could help to develop novel therapies for treating persistent infections.

Uropathogenic E. coli are the main culprits for causing urinary tract infections. Their pathological prowess is in part conferred by long extra-cellular fibres called pili, which are tipped with adhesive proteins. The pili latch onto epithelial surfaces in the urinary tract to enable the infection to take hold. Each strain of E. coli have around 10–12 different types of pili that appear to have different functions, but not all have been fully characterised.

Function of the pathogenic pilus discovered

One such pilus, called the Fml pilus, drew attention from a collaborative team of scientists from the US (the Center for Women’s Infectious Disease research at Washington University School of Medicine) and Belgium (the VIB Center for Structural Biology Research at the Vrije Universiteit Brussel). A key member of the team, Dr Han Remaut (Research Professor at Vrije Universiteit Brussel) explained the importance of this fibre: “It has been known for over half a century that a pilus known as the ‘type 1’ pilus binds mannose. It was later shown to be critical for colonising the lining of the bladder, and since then, multiple gene clusters of pili within the E. coli genome have been shown to be important in different diseases. Here we wanted to find out the function of a pilus known as Fml (or F9), which is very closely related to type 1, and had been seen to be expressed in urine of infected patients.”

The team sought to understand the structure and the pathogenic role of the distal tip of this mysterious pilus and initially performed macromolecular X-ray crystallography experiments at Diamond’s I03 and I04 beamlines. The data collected on these beamlines allowed the structure of the Fml adhesive tip, known as FmlH, to be resolved both in isolation and bound to its sugar receptor (with findings published in Cell Host & Microbe). Dr Remaut explained, “We were able to compare the structure of the adhesive subunit of Fml with that of the type 1 pilus and saw that there were just a few amino acid changes in the binding pocket. These changes make the F9 pilus bind to specific galactose, rather than mannose-based molecules.” 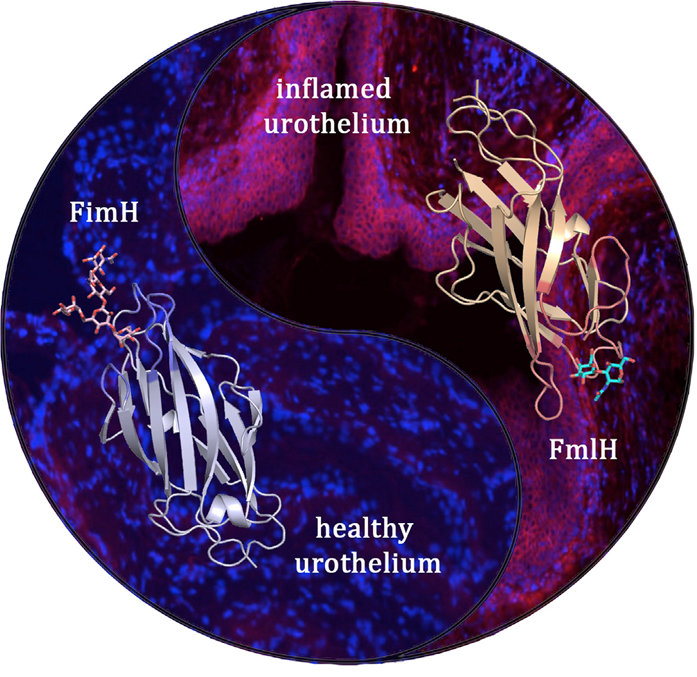 UPEC bacteria express two complementary pili that are optimised for consecutive stages during the bladder infection. The type 1 pilus adhesin FimH binds oligomannose receptors on healthy urothelium, whereas the F9 pilus adhesin FmlH targets galactose-based receptors that become exposed during the course of infection. Shown in ribbon diagram are the FimH (left) and FmlH (right) adhesin domains bound to their respective glycan receptors. The microscopy images show the absence or abundance of FmlH binding to the healthy (left) or inflamed (right) urothelium, respectively (cell nuclei are stained blue, FmlH is stained magenta).

Upon testing in mouse models of cystitis, it was noted that the galactose-based receptor that binds with FmlH was not present in naïve tissue, but it was exposed in chronically inflamed tissue. Furthermore, in situ binding experiments confirmed that FmlH bound tightly to the inflamed bladder lining, but failed to attach to non-inflamed tissue. Gene knockout experiments also showed that the pathogenesis of the bacteria could be drastically disrupted in the later stages of infection. These observations led the US and Belgian teams to believe that FmlH confers a survival advantage to E. coli during persistent urinary tract infections. Dr Remaut highlighted the relevance of these findings: “During the initial stages of infection, the type 1 pilus is most important for allowing colonisation, but Fml seems to take over as the infection becomes chronic. As the tissue becomes inflamed, it is remodelled and displays different sugars, so the bacteria possess spare pili to hold on under those conditions. Essentially, it really looks like the bacteria are prepared for what they will cause to the tissue.”

A further set of experiments explored the effects of immunising against FmlH. By prepping the immune system against the adhesion molecule, the development of urinary tract infections was halted in mice.

Taking this one step further, the teams have set their sights on developing a non-antibiotic inhibitor to disrupt the interactions between FmlH and its receptor to prevent chronic infections. “We will first develop an inhibitor in mice and then it could be trialled in humans. Inhibitors have already been developed for Type 1 pili, so we could follow a similar route and potentially combine the therapies” concluded Dr Remaut.