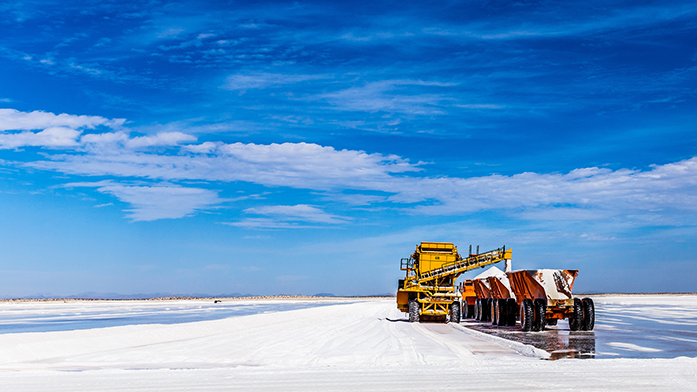 Sodium chloride being harvested in Guerrero Negro, Mexico. One of the largest salt fields in the world at 33,000 hectares. Credit: Gilad Rom.

Sodium is an abundant and readily available chemical element that offers the promise of a cheaper, if bulkier, alternative to lithium-ion rechargeable batteries. Hard carbons are among the most promising anode materials for sodium-ion batteries, but their amorphous structure is complex, and we do not yet understand how sodium is stored within it. Research published in Chemical Communications combined X-ray Pair Distribution Function (PDF) data from experiments on the new I15-1 beamline, with solid-state Nuclear Magnetic Resonance (NMR) spectroscopy performed at the University of Cambridge to investigate the electrochemical properties of hard carbons. The results revealed two ways in which sodium is stored in the carbon: at higher voltages, sodium ions appear to be stored on the surface of pores close to defects; at lower voltages, clusters of sodium ions, around 10 Å in size are formed within pores of the carbon. This study and future research offers the potential to design carbons with ideal pore architecture for rechargeable batteries.

Sodium-ion rechargeable batteries
It is hard to imagine the modern world without the lithium-ion battery, which powers our smartphones and other mobile devices, and even electric vehicles. Lithium-ion batteries are light and offer a high energy density in comparison to other battery chemistries, but lithium is a mined and limited resource. By comparison, sodium is cheap and is widely and easily available, and whilst sodium-ion batteries would be larger, they offer the prospect of a cost-effective, environmentally benign solution for renewable energy installations.

In the first paper published using data from Diamond’s new I15-1 beamline, researchers from the University of Cambridge and Diamond have been able to give new insights into hard carbon electrode materials used for electrochemical sodium storage.

A new dedicated X-ray PDF beamline
I15-1 saw first light in April 2016, and at the time of writing is in its commissioning phase. The beamline has been designed to supply the high-energy, high-intensity X-rays that are needed to make the measurements at high angles required for PDF analysis. According to Dr Phoebe Allan, one of the authors of the paper: “in PDF analysis, we are interested in the relatively weak, diffuse scattering, which is where you find the really useful information about local structure. To measure that you need a beamline with very low and reproducible background as well as high energy, and this is one of the important features of I15-1”.

Sodium electrochemistry in hard carbon anodes
Hard carbons are among the most promising materials for anodes in sodium-ion batteries as an alternative to the graphite anodes used in lithium-ion batteries. This is because they have a much higher sodium storage capacity compared to graphite anodes. However, our limited understanding of how sodium is stored within the hard carbons makes it difficult to design new and improved anode materials. PDF analysis is ideal for looking at these carbons, which have an amorphous structure both before and after sodium is inserted.

Fig. 1 (a) Experimental PDF data for pristine hard carbon and a PDF simulated using a turbostratically disordered graphite model; (b) difference PDFs of hard carbon anodes at various states of charge, showing the new interactions which are present when sodium in added to the material during the high-voltage (red, blue lines) and low-voltage (green line) processes.

As I15-1 is optimised for X-ray PDF, data could be collected and processed quickly and straightforwardly. These results were combined with solid state NMR studies into the local environment of the sodium ions carried out by lead author Josh Stratford from the group of Professor Clare Grey at the University of Cambridge. The research showed that there are two sodium storage mechanisms in hard carbon anodes: at high voltages sodium ions are stored on the surfaces of pores close to defects, whilst at lower voltages larger clusters of sodium ion are formed in the pores of the carbon, at the order of 10 Å. Understanding how the structural features like defects and porosity impact the way sodium is stored is important for potentially designing materials with structural features which promote a particular electrochemical storage mechanism.

Fig. 2: Operando 23Na NMR spectra for an electrochemical cell (collected at Cambridge University) with sodium metal and hard carbon electrodes are dominated by a single resonance, initially present close to 0 ppm, then shifting to positive frequencies. This is consistent with a two-stage mechanism.

The next steps for this research are to investigate hard carbons with different structures and from different sources, with the ultimate goal of enabling the design of hard carbons for particular applications. Dr Allan explains: “We think that the presence of defects probably has a big effect on the high-voltage sodium storage processes, and in controlling how the graphite-like, but disordered, carbon sheets stack; different methods of manufacture will affect the defects present in hard carbons. In order to tune these carbons, we now really need to understand the effect that synthesis conditions have on these different processes.”

New furnace in the Engineering and Environment Village
Now a Senior Support Scientist for DIAD (Dual Imaging and Diffraction), the new beamline planned for 2020, at the time of this research Dr Allan was a Senior Support Scientist in the Engineering and Environment Village working on sample environments across beamlines I11, I12, I15, and I15-1. In her previous role, Dr Allan developed a new furnace that uses focused infrared radiation to heat samples up to 1500 °C. The furnace, available to both industrial and academic users, allows researchers to observe the performance of a wide range of materials at high temperature.

The furnace will be commissioned on I15-1, and as well as high-temperature experiments, the beamline will be used for a range areas including investigating synthesis of materials, electrochemistry, and the local structure of metal organic frameworks. I15-1 is allocating beam time to users through the normal Diamond peer review process; the first such users are expected in April 2017.

To find out more about the I15-1 beamline, or to discuss potential applications, please contact Principal Beamline Scientist Dr Heribert Wilhelm: heribert.wilhelm@diamond.ac.uk

Photo credit: 'Salt of the earth' by Gilad Rom, reused under CC BY-NC 2.0.