Probing the origins of magnetism in Dilute Magnetic Oxides

Probing the origins of magnetism in Dilute Magnetic Oxides

The relentless drive for greater information storage capacity in physically smaller devices has pushed the size of components to scales where quantum mechanical effects become important. To aid such an increase in information density, both the electron spin and charge are exploited in the field of spin transport electronics; hence the portmanteau spintronics. The idea is to combine the characteristics of existing magnetic devices with semiconductor devices in order to realise a new generation of devices that are much smaller, more energy efficient, and much faster than presently available.1 A candidate class of materials are the dilute magnetic oxides (DMO). DMOs are formed when dilute levels of magnetic impurity transition-metal ions are randomly substituted into a host oxide lattice (see Fig. 1), and are proving to be one of the most puzzling and interesting classes of magnetic materials that have emerged in recent years. These materials may exhibit ferromagnetism above room temperature suitable for next generation spintronics-based multifunctional devices.2 However, the origins of the magnetic response still remain unclear. An ideal intrinsic DMO exhibits ferromagnetism as a result of a coupling interaction between localised moments at the substituted sites mediated by charge carriers of the host oxide.  Our recent studies at Beamline I06 show that transition metal ions in our DMO material are not the sole source of the ferromagnetic response, and that they are, in fact, paramagnetic.
The origin of magnetism in DMO systems has been under major dispute and the subject of intense activity.  Here, a series of experiments were devised to investigate the origins of magnetism in Cobalt (Co) -doped Indium Tin Oxide (ITO) thin films.  Extensive studies were performed using X-ray Absorption Spectroscopy (XAS) combined with X-ray Magnetic Circular Dichroism (XMCD) at the In, Sn and Co absorption edges over a range of temperatures. The XAS spectra were recorded in both Total-Electron Yield (TEY) and Fluorescence Yield (FY) modes in order to measure the surface and bulk components, respectively.
The first results demonstrated that there was no XMCD signal at the In or Sn M-edges at 2 K which therefore excluded a magnetic polarisation of the In s­- and Sn s- and d-states. Figure 2 (a) shows the XAS and XMCD spectra measured at 2 K in a 4 T field at the Co L2,3 edge in TEY mode. The absorption edges are due to the intense 2p?3d transitions. This transition provides clues about the density of the exchanged split unoccupied Co 3d states responsible for magnetism of the Co(Ref 3). The pronounced multiplet structure of the at the Co L2,3 edges, which arises due to Coulomb and exchange interactions between the 2p core hole and 3d valence states, is typical of a Co2+ ion. A large XMCD signal is present at the L3­ edge indicating a significant magnetic moment at the Co2+ sites in an applied magnetic field. By comparing the XAS and XMCD spectra to those of metallic Co(Ref 4) we conclude that Co clusters are absent in the surface region. From the inset of Figure 2 (a), the FY spectra also shows multiplet features, implying that the bulk of the film is also free from metallic Co clusters.

To corroborate the experimental results, the XAS and XMCD spectra were calculated for the octahedral site symmetry of the Co ion assuming Co substitutes for In3+. Figure 2 (b) shows the calculated results, which are in excellent agreement with the experimental data. The multiplet features are maintained across the entire temperature range, which is a signature of good ionic behaviour. 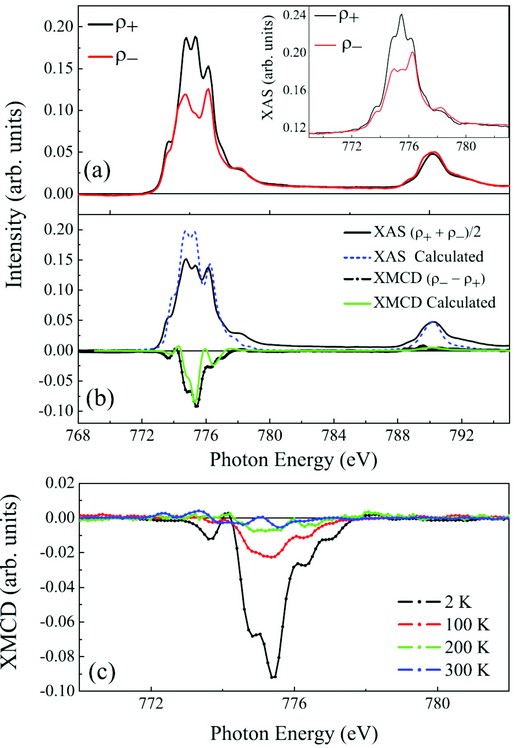 Element-specific XMCD magnetisation curves confirmed the paramagnetic nature of the Co dopants (Fig. 3, inset). The measured curve could be modelled well using a Brillouin function, used to describe paramagnetic behaviour. No remanent magnetisation was detected and was confirmed by the lack of magnetic dichroism at remanent field (Fig. 3, main panel). 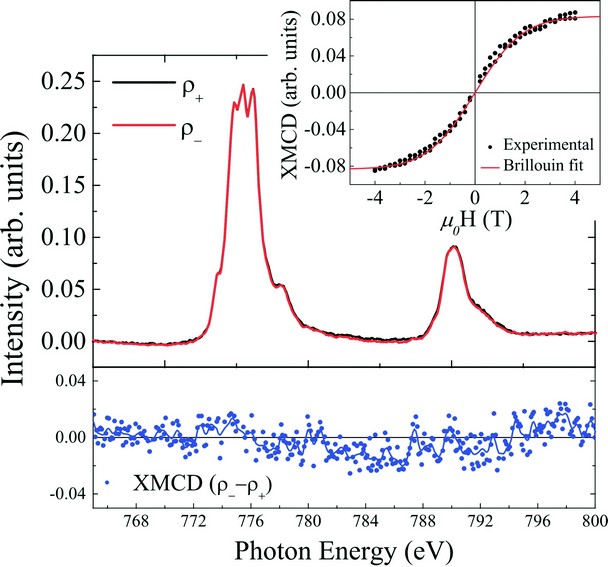 Figure 3: XAS and XMCD spectra at the Co L2,3 edge of a 5.4 at. % Co-doped ITO film in FY mode at remanence and 300 K. The XMCD is shown in the lower panel (closed blue circles with solid blue line). Inset : Magnetisation curve measured at the Co L3 edge in FY mode at 2 K (solid black circles), along with the fit to a Brillouin function (solid red line).

The evidence presented excludes a significant ferromagnetic contribution to the magnetic response in these films from the Co dopants alone. These results suggest that the ferromagnetism we observe in Co-doped ITO is not related to the Co 3d electronic states. This is rather contradictory to what has been assumed to account for the magnetic properties in the DMO systems using theoretical models to explain the unexpected behaviour. These findings indicate that the bulk ferromagnetism observed from the SQUID magnetometry measurements may be oxygen mediated, e.g., oxygen vacancies or oxygen-induced defects. Oxygen K-edge XAS data will certainly be capable of providing useful information on whether the features could be signatures of oxygen related lattice defects. Future studies will be directed toward detailed measurements at the oxygen K- edge in order to refine the findings of the current study.
Hakimi, A. M. H. R., Schoofs, F., Bali, R., Stelmashenko, N. A., Blamire, M. G., Langridge, S., Cavill, S. A., van der Laan, G., and Dhesi, S. S. Origin of magnetism in cobalt-doped indium tin oxide thin films. Phys. Rev. B. 82, 144429 (2010)
References
Funding Acknowledgement
Engineering and Physical Research Council and the Science and Technology Facilities Council.