Proteins are large molecules essential to life; they perform vital functions such as repairing cells and tissues and producing enzymes for digestion. The structure of a protein determines how it functions.

Most proteins are built from two structural building blocks—the alpha helix and the beta strand. These can be combined in different ways to generate an amazing gallery of 3D shapes that give natural proteins their many functions. 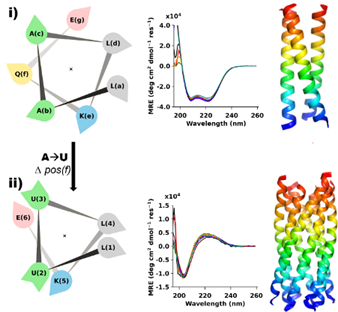 Over the decades biologists have been tweaking existing proteins to make them work better, or not at all, to assist and improve human health. Recently, scientists have been turning their attention to protein engineering – designing novel proteins to perform specific functions.

Using chemical synthesis, a team of scientists from the University of Bristol have designed a completely new molecule using a rare form of the alpha helix protein building block called the 3-10 helix. This was achieved by combining amino acids—the chemical units of proteins—that are found in natural proteins with others that are not

The team used Diamond’s X-rays to confirm their solution studies. Studying the crystallised form of the protein enabled them to see that the designer proteins formed bundles of pure 3-10 helices that could essentially act like a scaffold. This was a never-seen-before molecule. 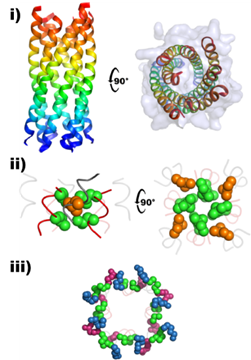 The creation of a novel, molecular scaffold opens up a range of possibilities with regards to designing proteins with a purpose. The Bristol team will now look to probe this so-called "dark matter" of protein structure to explore chemistries and functions that go beyond those of natural proteins.