Hongchang Wang is a Senior Optics Scientist in the Optics and Metrology Group.  Hongchang joined Diamond in March 2009 after working for the University College London.

X-ray optics, including mirrors, Fresnel zone plates and compound refractive lenses, play an important role for micro- or nano-focusing in synchrotron radiation experiments. However, the push toward high resolution and sensitivity on the nanometer scale to create diffraction-limited and coherence-preserved beams requires further development of X-ray optics. This in turn demands more accurate metrology. The ultimate measure of an X-ray optic’s performance is when it’s installed on the beamline. The best pathway to overcome these limitations, and help to improve the present performance of X-ray optics, is using at-wavelength (performed with X-rays) and in-situ (performed in a beamline environment) techniques.

We have implemented and further developed X-ray grating based and speckle based techniques at the Diamond Test beamline B16. Both techniques have been used in the X-ray phase contrast and dark field imaging, in-situ characterization and optimization of X-ray optics.

Polarized soft x-rays have played an important role in the investigation of magnetic materials containing 3d transition metals and rare earth-elements. Knowledge of the degree of polarization is essential, not only for understanding the undulator performance, but also to carry out a precise analysis of dichroic and chiral experiments. A high-precision polarimeter has been designed and built by Diamond scientists along with colleagues from STFC. This flexible polarimeter has been routinely used for the polarization measurement among the soft X-ray beamlines at Diamond. 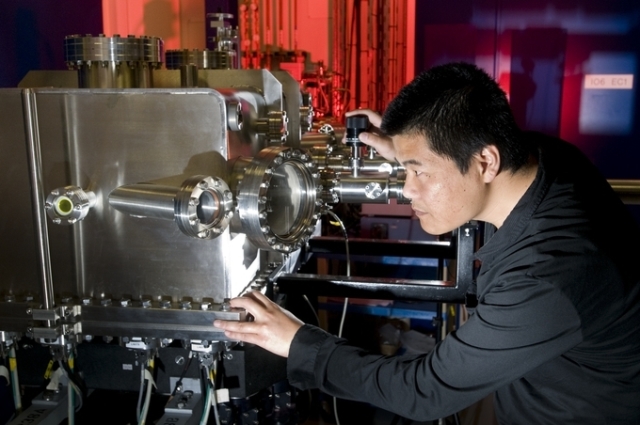