Green hydrogen could be crucial for our transition to renewable energy sources. However, hydrogen production via water electrolysis currently relies on using expensive metal-based oxides, such as iridium oxide and ruthenium oxide, as electrocatalysts. Mixed 3d transition metal oxides, such as mixed Co-Fe spinel oxides, have the potential to be cheaper alternatives. However, to develop improved catalysts, we need a better understanding of their complex structure-activity-stability relationships, at an atomic level. In work recently published in Nature Communications, an international team of researchers used Atom Probe Tomography together with X-ray and electron imaging techniques to determine the 3D structure of Co2FeO4 and CoFe2O4 nanoparticles during the Oxygen Evolution Reaction (OER). Their study provides a unique 3D compositional distribution of mixed Co-Fe spinel oxides, offering atomic-scale insights into active sites and the deactivation of electrocatalysts during the OER. 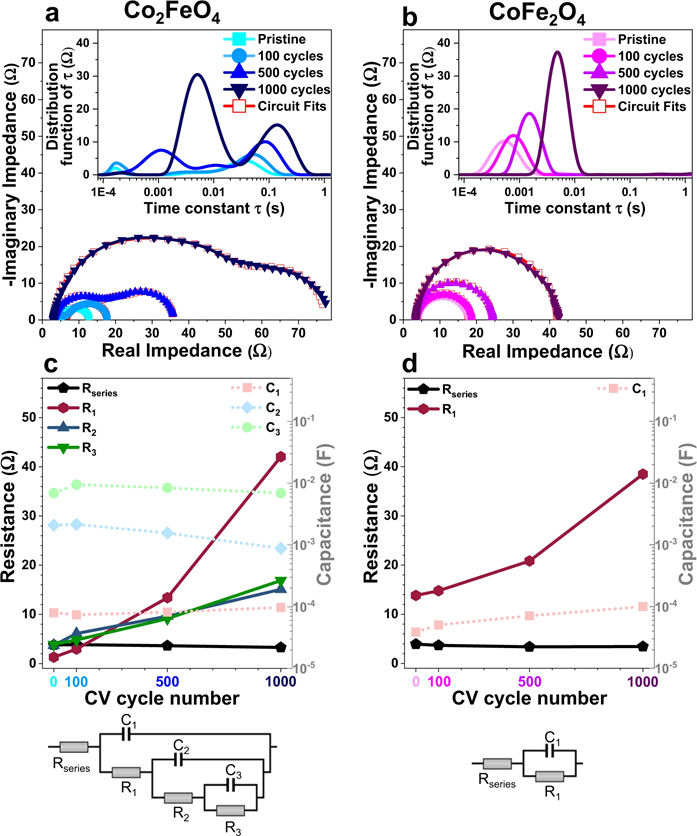 Electrochemical sub-processes of Co2FeO4 and CoFe2O4 during OER. Electrochemical impedance spectroscopy data in complex plane representation (Nyquist plot) and determined distribution of relaxation times (insets) of electrodes covered by a Co2FeO4 nanoparticles at 1.63 V vs. RHE (≈ELSV,initial (6 mA/cm2geom)) and b CoFe2O4 nanoparticles at 1.73 V vs. RHE (≈ELSV,initial (6 mA/cm2geom)) in the pristine state and after 100, 500 and 1000 cycles. c, d Corresponding changes of the resistances (solid lines) and capacitances (dashed lines) as the number of CV cycles increases (obtained by equivalent circuit fitting to the displayed model circuits).
Image reused from DOI: 10.1038/s41467-021-27788-2 under the CC BY 2.0 license.

Moving away from our dependence on fossil fuels and increasing our use of renewable energy sources will help to reduce the severity of climate change and improve our energy security. However, green energy sources such as wind and solar are not constant, varying according to the time of day, the season, and the local weather. As a result, we'll need ways to store surplus energy to cope with the peaks and troughs in both supply and demand. One potential storage method uses surplus renewable energy to create hydrogen gas via electrolysis, using an electric current to split water into oxygen and hydrogen. Then, when more power is needed, the stored hydrogen gas can be fed into a fuel cell to reverse the process. Hydrogen gas can also power vehicles and replace natural gas for domestic heating and cooking, and industrial processes.

There are two reactions involved in producing hydrogen via water electrolysis - the Oxygen Evolution Reaction (OER) and the Hydrogen Evolution Reaction (HER). The OER is slower and is therefore the limiting factor for hydrogen production. Another issue is that OER changes the surface of the electrocatalysts used, so that the catalyst becomes increasingly inactive. To optimise the electrocatalysts and speed up the OER, we need a detailed understanding of how the surface composition of electrocatalysts correlates with their activity and stability. During the OER, the electrocatalyst surfaces undergo drastic structural and compositional changes, so it is also crucial to investigate the role of individual atoms. However, performing a complete 3D structural and chemical characterisation of the topmost atomic layers of electrocatalysts is hugely challenging, particularly for catalyst nanoparticles under 100nm in diameter.

This project was a collaboration between researchers from the Ruhr-Universität Bochum, the University of Duisburg-Essen and the Max Planck Institute for Chemical Energy Conversion in Mülheim an der Ruhr.

The team studied two different types of cobalt iron oxide nanoparticles, around 10nm in diameter - Co2FeO4 and CoFe2O4 - during the OER. Using Atom Probe Tomography (APT), they successfully visualised the distribution of the different types of atoms in the catalysts in 3D.

Prof Tong Li, from the Ruhr-Universität Bochum, is a senior author on the paper. Prof Li says,

Atom probe tomography has enormous potential to provide atomic insights into the compositional changes on the surface of catalyst nanoparticles during important catalytic reactions such as oxygen evolution reaction for hydrogen production.

However, APT on its own does not provide the complete picture, and the researchers combined it with complementary electron microscopy and X-ray spectroscopy. At Diamond's I20-scanning beamline, they used X-ray absorption spectroscopy (XAS) to characterise the evolution of the geometric and electronic structure of mixed Co-Fe oxides under OER conditions.

The aims of the study were to correlate the structural and compositional evolution of Co2FeO4 and CoFe2O4 electrocatalysts with changes in OER performance, and to elucidate the role the iron plays.

The APT data show that spinodal decomposition (segregation of solids on a nanometre scale to produce two or more stable compounds) during the OER causes the electrocatalysts to develop Co-rich and Fe-rich nanodomains. It is now clear that the structural and compositional evolution of Co2FeO4 and CoFe2O4 during the OER is closely associated with their deactivation.

Two more important conclusions are that the OER is catalysed concurrently by multiple active regions in a single nanoparticle and that Fe plays a crucial role in the OER activity. The team think that the amount of Fe loss indicates how rigorously OER occurs.

The combination of Atom Probe Tomography with electron microscopy, X-ray spectroscopy and electrochemical data shows great promise for improving our understanding of the complex structure-activity-stability relationships of electrocatalysts during important reactions, such as OER and CO2 reduction.