When a tsunami enveloped the Fukushima Daiichi Nuclear Power Plant in 2011, it resulted in a loss of coolant that partially melted the boiling water reactor Units 1–3. Reactor temperatures rose above 2000ºC, melting together uranium dioxide fuel pellets, zirconium cladding, steel and concrete. As temperatures reduced, this mixture solidified into a glass-ceramic material called Molten Core-Concrete Interaction (MCCI). The environment within the plant remains highly radioactive, and we will need to design robots to remove the MCCI for safe storage and disposal. However, to do so, we need a better understanding of the mechanical properties of the MCCI, and samples cannot currently be collected. Instead, researchers are developing simulant materials that can be used for research and testing. In work recently published in npj Materials Degradation, researchers from the University of Bristol, the University of Sheffield and Diamond Light Source used synchrotron techniques to explore the mechanical properties of a new MCCI simulant. Their results show this technique to be an efficient method to accurately estimate the material's mechanical properties, including Young's modulus and Poisson's ratio. 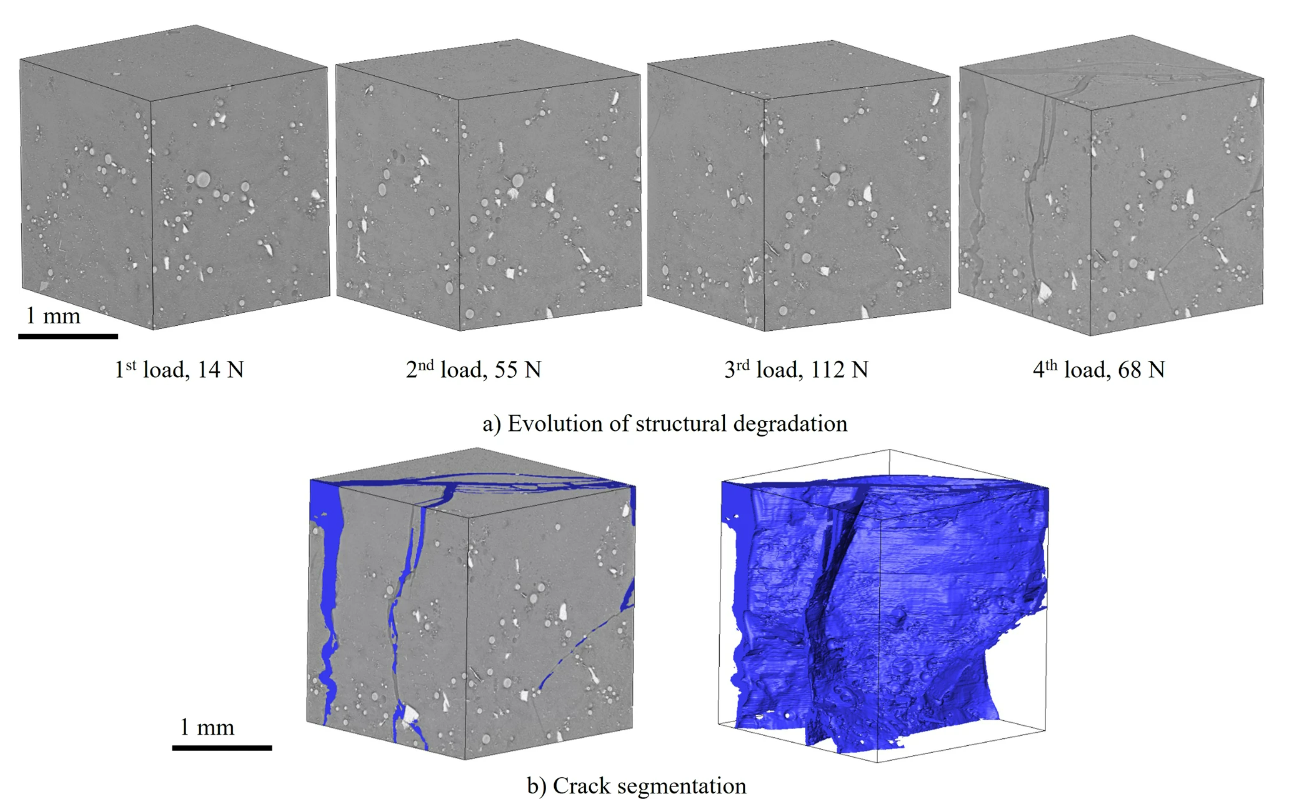 Eleven years on from the disaster at Fukushima, the MCCI is still embedded within the damaged reactor vessels. The radioactive caesium-137 and strontium-90 present generate heat, and nearly 400 m3 of water are required for cooling every day. Radioactive material dissolves into the cooling water, which is collected for reprocessing. However, stored contaminated water could leak, and there are periodic leaks of caesium-137 into the environment. It is, therefore, vital that the MCCI is removed and safely stored so that the site can be completely decommissioned.

Human workers cannot remove the MCCI from the highly radioactive reactor vessels. So instead, engineers will design and build dedicated high-tech robots to do the job. The robots will need to remove the MCCI with as little disruption as possible, to avoid releasing highly radioactive material into the environment. To design suitable robots, we need a thorough understanding of the mechanical properties of the MCCI, but retrieving samples for analysis is impossible.

The nature of the compound materials produced during a nuclear disaster is likely dependent on the nature of the reactor and its containment building. Unfortunately, that means data from previous disasters - such as Chernobyl and Three Mile Island - is of limited use in understanding MCCI.

A team of researchers at the University of Sheffield has developed new materials that safely recreate the MCCI so that we can study their chemical and mechanical properties and develop safe strategies for decommissioning Fukushima. Simulated Chernobyl samples created using a similar method were found to have comparable microstructure to actual "lava" samples from the Chernobyl site.

The simulants omit the most radioactive portion of the MCCI, which account for most of the radioactivity but only a small fraction of the chemical composition. However, the simulant materials still need to be handled carefully, which limits the amount of testing that can be done.

The team used Hertzian indentation to test the mechanical properties of the MCCI-simulant. This involved pressing a zirconium dioxide sphere into the sample to create a mechanical load. The team assembled a bespoke mechanical rig on Diamond's I12 beamline so that they could conduct these incremental loading experiments in the X-ray beam.

The team took synchrotron X-ray computed tomography (XCT) scans at different loading stages, which revealed the load-induced changes in the sample's microstructure. They used digital volume correlation (DVC) to analyse the tomograms, which gave the correlation between the material's microstructure and its mechanical behaviour.

The team found combining the DVC-measured displacement and strain fields with the corresponding external load to be an efficient method for accurately estimating the sample's mechanical properties, including Young's modulus and Poisson's ratio.

Their results show that the MCCI-simulant has a higher stiffness and a lower total porosity than "lavas" from Chernobyl. In addition, the processed data revealed areas with elevated axial and shear strains, indicating potential failure zones for the material, where no signs of damage were detected in the corresponding tomograms.

The nature of the MCCI is likely to change over time, and further investigations are needed, but these results will contribute to the effort to decommission the Fukushima Daiichi Nuclear Power Plant safely.

To find out more about the I12 beamline please visit https://www.diamond.ac.uk/Instruments/Imaging-and-Microscopy/I12.html