Dopamine is a type of chemical messenger (neurotransmitter) which plays a vital role in the central nervous system, involved in numerous essential bodily functions, including controlling our mood, memory, sleep, and movement. The tyrosine hydroxylase enzyme is critical to the biosynthesis of dopamine in the brain. Deficiency or malfunction of tyrosine hydroxylase (TH) results in a depletion of dopamine, causing Parkinson’s-related disorders (Parkinsonisms). On the other hand, too much dopamine is also harmful to brain cells, so maintaining an appropriate balance is key to normal brain function. Due to a lack of detailed information on the structure of full-length human TH, understanding of its interaction with dopamine and the role of this interaction in regulating TH activity is missing. In work recently published in Nature Communications, an international team of researchers led by Professors José Valpuesta (Centro Nacional de Biotecnología. Madrid) and Aurora Martínez (Bergen University) employed state-of-the-art cryo-electron microscopy facilities at eBIC, Diamond’s electron Bio-Imaging Centre, centre to solve the structure of full-length human TH for the first time. Their results also demonstrate the essential molecular processes behind inhibition and activation of TH. 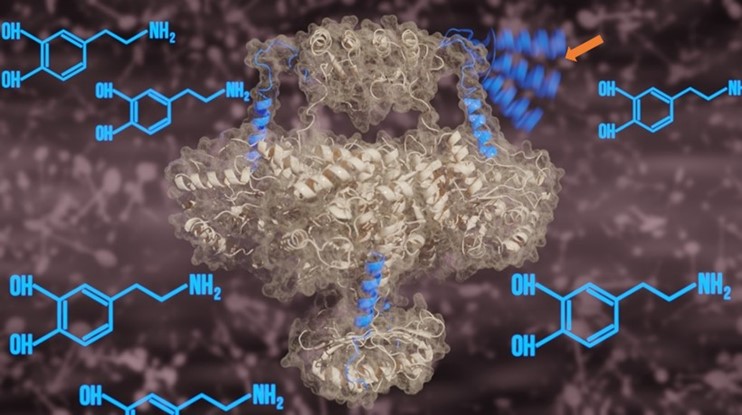 Artistic montage showing the atomic model of TH in the centre surrounded by dopamine molecules, which stabilise the N-terminal α-helices (highlighted in dark blue) in the four active centres of TH (only three of which are visible), blocking the active sites. The moving α-helix (marked by the orange arrow) illustrates how the four α-helices “float” outside the active centre in the absence of dopamine.

TH plays a pivotal role in the conversion of amino acid tyrosine into dopamine. It is known that dopamine interaction with TH inhibits the activity of TH, whilst phosphorylation at specific site reactivates the enzyme. However, understanding precisely how this regulatory mechanism functions at the molecular level requires a deeper understanding of the structure of full-length TH. This is key to developing therapies to target malfunctioning TH in Parkinsonisms. The structure of full-length TH had been elusive until now, remaining an analytical challenge.

The TH complex is very flexible, inherent to its function. This makes TH difficult to crystallise for analysis by X-ray crystallography. The whole complex is also too big to analyse by nuclear magnetic resonance (NMR).

Cryo-electron microscopy (cryo-EM) enables researchers to study proteins at atomic or near-atomic spatial resolutions, whilst also keeping the sample in a frozen-hydrated state. This minimises any chemical or structural changes to the sample which may occur during preparation. The latest advancements in cryo-EM are enabling researchers to significantly improve data quality.

The most important aspect of the cryo-EM revolution is the advancements in the efficiency and speed of modern electron detectors. It is now possible to acquire several hundred images per second. This is very important because when the sample is irradiated by the electron beam, thermal energy deposited in the sample causes it to move. This negatively impacts spatial resolution. By cross-correlating hundreds of images, the spatial resolution required to view single molecules can be restored.

In this work, the team utilised the 300 kV Titan Krios cryo-electron microscope at Diamond’s eBIC facility to analyse the structure of recombinant human TH. The central structure of TH was shown to be formed from four sub-units (tetramer) with regulatory and catalytic domains (distinct functional regions of the enzyme structure) separated by a distance of 1.5 nanometres. This distance is approximately 200,000 times smaller than the diameter of a grain of salt!

More information on the interactions between TH and dopamine were revealed using molecular dynamics simulations. The team showed that when dopamine is chemically bound to TH by the alpha helix, the function of the enzyme is inhibited. When TH is phosphorylated at a specific location, this releases the alpha helix which was blocking the active site, thereby reactivating the enzyme. These two processes are instrumental in regulating the function of TH in the brain.

This study showcases how Diamond is facilitating access and support for researchers from all over the world to make use of cutting-edge cryo-EM facilities.

Diamond is a reliable place for us to collect good quality data. The instruments at eBIC are very well-maintained, free to access, and our experiments are supported by a professional team of staff. The ability to operate the cryo-EM remotely also means that there are no longer logistical barriers to carrying out experiments.

By revealing the full-length structure of TH and the pivotal role played by the alpha helix in regulating TH activity, this work constitutes a leap forward in understanding the structure-based mechanism underpinning some Parkinsonisms. A better structural understanding may also support the development of novel stabilising/chaperoning therapies to target malfunctioning TH, very much needed by patients who are unresponsive to conventional medications for Parkinson’s.