Helical structures are seen in nature, notably in the DNA double-helix. Columnar liquid crystals can be induced to form helical structures by including chiral chemical groups or dopants that bias a molecular twist to the left or right. However, some liquid-crystalline columns can also spontaneously form as helices, an example of spontaneous long-range order analogous to that of ordered spins in ferromagnetism. This chirality is seen in the recently discovered Fddd phase, which is seen at lower temperatures. In work recently published in Nature Communications, a team of researchers from the UK and China used synchrotron X-ray techniques to investigate why helices form in this phase. Their results show that a complex lattice with Fddd symmetry and eight columns per unit cell (four right-, four left-handed) allows close packing of fluorescent groups, reducing their bandgap and offering promising light-emitting properties.

Chirality refers to objects that - like our hands - do not coincide with their mirror image. Chirality can also be found in crystals, where atoms wind around each other to form a helix. Ferromagnetism and ferroelectricity are both cases of an effect arising spontaneously out of long-range natural order. By extending the analogy, we can understand the concept of ferrochirality (or antiferrochirality) as chirality spontaneously arising from the ordering of molecules that are not, themselves, chiral. 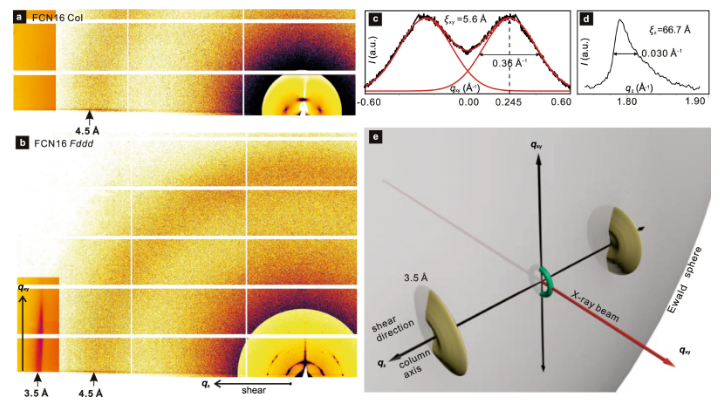 a, b: GIWAXS of lightly sheared film of FCN16 in Col (130 °C) and Fddd (100 °C) phases, respectively; note the absence of the 3.5 Å streak in Col phase.
c, d: qxy (vertical) and qz (horizontal) scans of the 3.5 Å streak in b; in c the peak is reflected across the horizon to facilitate curve resolution.
e: Reciprocal space description of diffraction geometry in b, showing symbolically a SAXS ring and the 3.5 Å disks cut by the Ewald diffraction sphere.

Liquid crystals (LCs) are a state of matter with properties between those of a conventional liquid and a solid crystal. We're familiar with the use of LCs in display screens, but they also occur naturally in proteins and cell membranes. In LCs, long-range order normally occurs in terms of molecular orientation and/or the position of phase-separated domains. However, in rare cases, LCs demonstrate self-propagating chirality, although the molecules themselves are not chiral.

Recent research has shown that two types of bicontinuous 3D network LC phases are always chiral. These phases form from rod-like molecules with more than one flexible end chain. The presence of the end chains means that the molecules cannot remain parallel when they stack, so they rotate slightly. At higher temperatures, the molecules can rotate in either direction, so they form an ordinary column. However, at lower temperatures there is a phase transition. In the new phase (Fddd), the molecules rotate in the same direction to form a helix. The helix is preserved in the long-range order, but why is this chirality maintained?

A collaboration of scientists from the UK and China investigated the crystal structure of two liquid crystal groups that form a helical structure. One LC molecule type was rod-shaped with three chains at each end, while the other was a bent 'banana' shape. They used a combination of synchrotron techniques - Small Angle X-ray Scattering (SAXS) and Wide Angle X-ray Scattering (WAXS) on Diamond's I22 beamline, and grazing incidence WAXS (GIWAXS) on Diamond's I16 beamline and at the European Synchrotron Radiation Facility (ESRF).

Our work at Diamond allowed us to index and find the unit cell, and then reconstruct the electron density map. We needed the combination of X-ray techniques to solve the structure, and the electron density maps clearly show the twists in the helices for both types of LC molecule. Theoretical calculations show that the arrangement the molecules choose is the best packing system, with the lowest energy.

The results show that LC columns with long-range helical order can form by spontaneous self-assembly from straight- or bent-rod molecules. This means that chirality can be generated without the need for synthesising chiral molecules, which can be difficult. The "antiferrochiral" structure is characterised by a complex lattice with Fddd symmetry and eight columns per unit cell (four right-, four left-handed). In fluorescent materials, the Fddd phase allows close packing of fluorescent groups, reducing the bandgap and presenting promising light-emitting properties. The wavelength emitted changes with the phase, and the fluorescence can therefore be controlled by temperature.

We have now found that the Fddd phase occurs in many materials, including polymers. The generation of circularly polarised light through conventional means involves considerable energy losses. Spontaneously chiral phases offer the potential for making energy-efficient circularly polarised LEDs.