On the move: How magma crystallisation affects volcanic eruptions

Studying how magma moves within Earth's crust can help us to predict when volcanic eruptions will occur, an early warning system that saves lives. Previous research has shown that basaltic magmas migrating upwards in dikes may become "frozen" in the crust, unable to contribute to an eruption. Liquid magma behaves as a Newtonian fluid, like water, its viscosity does not change when a force is applied. However, as magma cools, the formation of crystals affects magma mobility. Understanding this process is fundamental for determining the mobility of magmatic bodies and the hazards associated with the potential eruptibility of basaltic systems. In work recently published in Nature Communications, an international team of researchers has developed a new technique to investigate crystallisation and its effects on magma mobility. Their novel approach yielded insights into magma propagation and will also be useful to materials scientists. 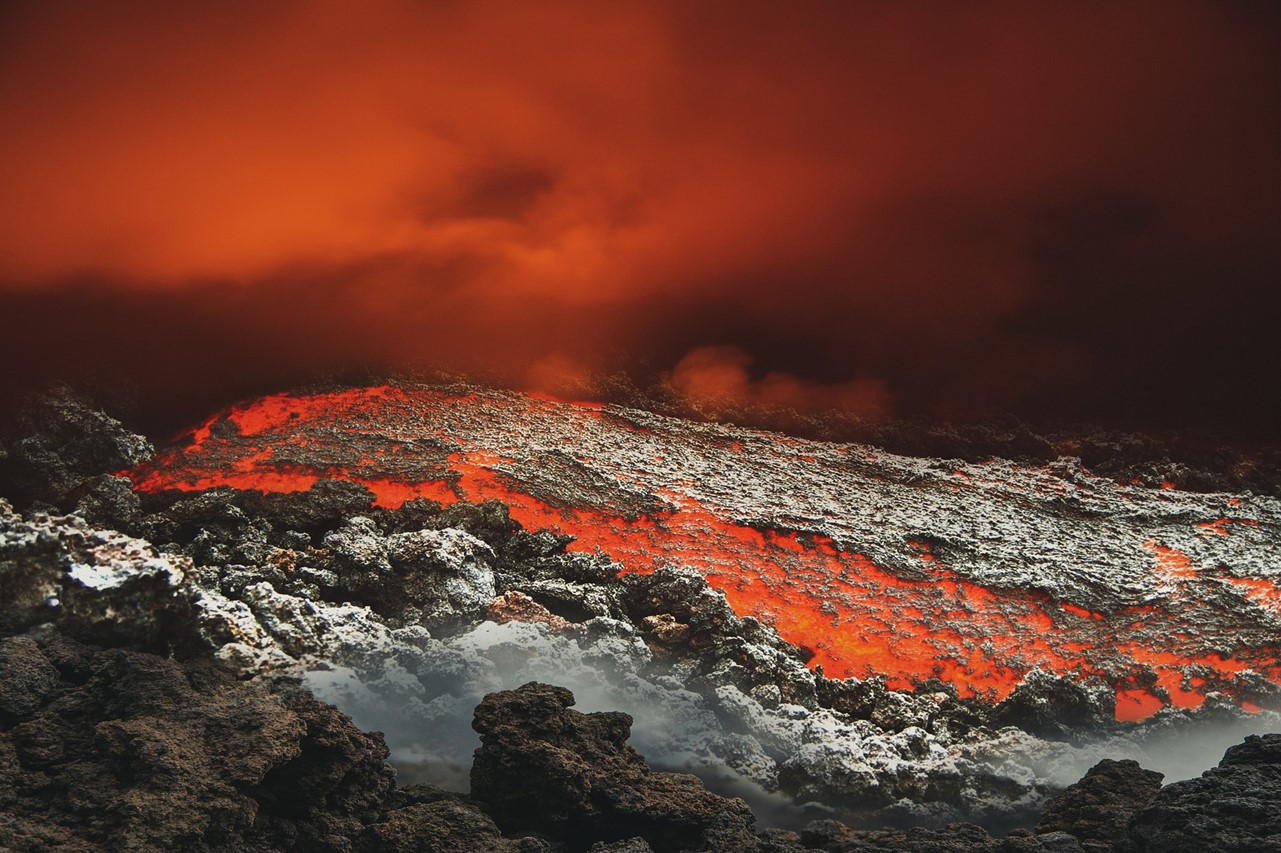 Volcanic eruptions are some of Earth's most newsworthy natural events, producing incredible images. In 2021, thousands of tourists flocked to the lava flows produced by Iceland's longest volcanic eruption in 50 years. However, while some eruptions are relatively benign in human terms, others cause considerable disruption, or even devastation. In 2010, an eruption in Iceland ejected volcanic ash into the atmosphere, grounding aeroplanes and stranding travellers. Last year's eruption in the Canary Islands lasted for months and buried entire communities. At the beginning of 2022, the eruption of the Hunga Tonga-Hunga Ha'apai undersea volcano was one of the most explosive volcanic events of the modern era, causing a tsunami. The more we understand the factors affecting when a volcano will erupt and how damaging it will be, the better we can protect the communities that live in their shadow.

The lava flows of molten rock (magma) we see during eruptions originate in Earth's mantle. Sandwiched between the Earth's thin crust and its dense, super-heated core, the mantle makes up 84% of Earth's volume. Basaltic magma is the most common type, and we know that basaltic magmas can spend time stagnating in reservoirs before migrating upwards and potentially erupting. At high temperatures, magma is entirely liquid and behaves as a Newtonian fluid. As the temperature drops, crystals form within the magma, affecting its mobility.

Magma rises to the surface mainly through near-vertical dikes within the crust. Dikes either reach the surface and trigger an eruption or become trapped within the crust, depending on the properties and flow rate of the magma. Crystallisation kinetics can play a major role in this process, causing rapid and significant changes in magma characteristics.

An international team of researchers has used a novel high-pressure experimental apparatus and Diamond's I12-JEEP beamline to investigate crystallisation kinetics in basaltic magma from Mount Etna in real-time.

Under pressure: Replicating conditions in the shallow crust

To replicate the temperature within the crust, the team used the P2R uniaxial mechanical rig installed on I12. Initially designed for materials science, the P2R is a device that can heat and apply mechanical loads to a sample, which makes it very useful for studying how magma behaves. For these experiments, the team developed a crucible to hold magma samples and a piston to compress it to increase the pressure. This novel technique allowed them to control the magma's temperature, pressure and water content and perform X-ray microtomography in real-time. By starting with the magma completely liquid and lowering the temperature, taking tomography scans of the sample every minute, they could visualise the development of crystals in 3D. This was the first exploration of crystallisation in basaltic magmas.

Dr Fabio Arzilli from the University of Camerino is the paper's lead author. He said:

Using X-ray microtomography allows us to reconstruct images directly in 3D and measure the evolution of textures directly in 3D with time resolution of one minute. So it is a very powerful technique that allows us to track every minute of the development of crystallisation in the magma. And we observed that we can have fast crystallisation and fast evolution of crystal morphology that can affect the physical properties of magma within a couple of hours if you have the right conditions.

Beamline I12 was used because it is a high photon energy, high intensity beamline designed to perform imaging and diffraction experiments on large, complex samples. The high photon energy enabled X-rays to penetrate through the crucible and magma, while the high beam intensity enabled time-resolved tomography scans of the sample at high resolution. Additionally, the beamline has the space and flexibility to accommodate the experimental team's P2R rig.

Dr Robert Atwood is a Beamline Scientist on I12 and an author on the paper. He said,

The study of solidification in metallurgy and materials science, especially with regard to industrial casting of metal parts, has typically focussed on the process of crystallisation on the time scale of seconds or minutes in relatively simple chemical systems. Whereas geological studies have typically considered timescales of days, years or longer, but with the complex chemistry of natural materials. Collaboration between experts in this project bridges this gap, combining the microstructural development during solidification with complex geochemistry.

The team used the data they collected at Diamond to update a simple mathematical model that simulates magma propagation within a dike.

We observed that when we have this fast crystal evolution, particularly from a crystal that is well-formed to dendritic crystal, crystal evolution can change quickly, affecting the physical property of magma. And the model shows that this will affect magma migration, locking up, in certain conditions, basaltic magma within the crust. So that the magma cannot reach the surface, feeding an eruption

This new information will help us better understand how magma behaves, which is important as dike propagation was observed before the eruptions in Iceland and La Palma last year.

In addition, the results demonstrate the utility of the new technique, which has applications beyond geology.

Our technique allowed us to perform, for the first time, experiments adding pressure with water dissolved within the melt. Crystallisation is a ubiquitous process that can be studied in different materials and for different reasons. This opens up opportunities for other scientists, not just geologists or volcanologists.

To find out more about the I12-JEEP beamline, please visit the dedicated web area: https://www.diamond.ac.uk/Instruments/Imaging-and-Microscopy/I12.html 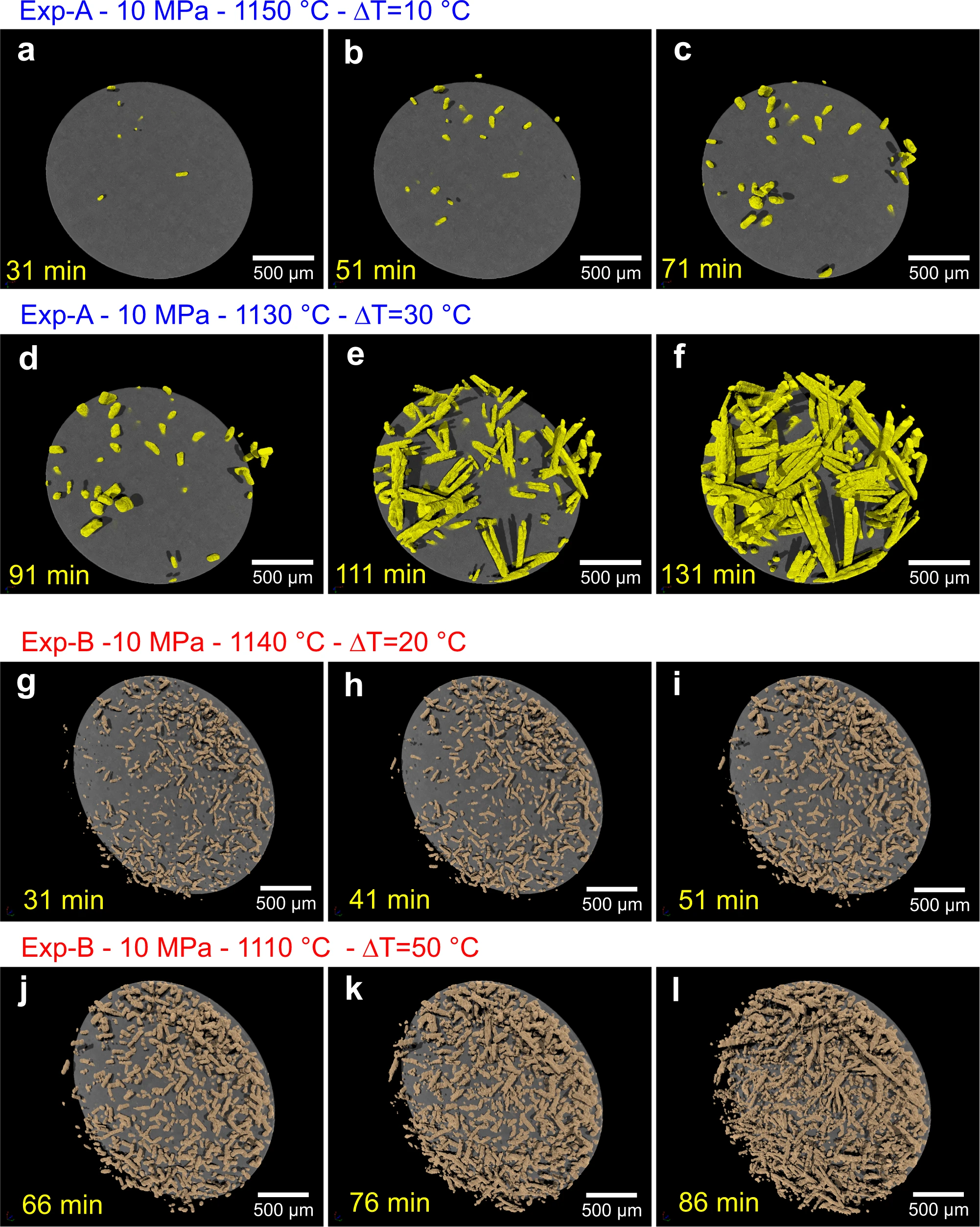