Semi-solid materials – fine mixtures of liquid and solid - are an important class of material that appears in industry and nature. Magma rising in the core of a volcano is often such a mixture, and so is the casting of a semi-solid metal which is used in modern manufacturing techniques. However, their mechanical and chemical behaviour is not understood well enough, limiting the ability to predict the kinetics of volcanic eruptions as well as to improve the design of casting processes. This is particularly the case for granular flow near the melting point, when the material behaves partially as a solid and partially as a liquid. It is known that the nature of this flow can influence the chemistry and microstructure of semi-solid materials, as well as leading to the formation of defects such as damage voids and hot cracking. Diamond Light Source’s Joint Engineering, Environment, and Processing beamline (I12) has revealed, for the first time, how semi-solid materials develop at the microstructural scale as they are deformed.

A set of tomographic scans were recorded at nine second intervals during the deformation of the semi-solid alloy at temperature and strain conditions similar to those applied during industrial casting. The resulting series of three dimensional images of the deformation process were then converted into displacement and strain maps. These revealed the mechanisms by which defects can form in the alloy during flow. Initially grains rearranged via translation and rotation and create liquid channels which are enriched in alloy components. Subsequently the solid phase deforms plastically and compacts. Most interestingly, the very defect dynamics that occur in this semi-solid is a combination of two processes that happen independently in other materials, namely grain fracture caused by high stress and liquation, i.e. chemically mediated fracture between individual grains at low stress. The findings add to the fundamental understanding of microstructure dynamics in semi-solid materials and thus have an impact on advanced manufacturing techniques such as semi-solid squeeze casting. At the same time they improve our comprehension of magma dynamics which may help with the fundamental understanding of volcanism.

Multi-component materials near the melting point are composed of liquid and solid regions, and chemical components are constantly transferred between the phases. Depending upon how the semi-solid flows and deforms, the local chemistry will change, the microstructure will alter, and defects such as voids and hot cracking can occur. Three-dimensional visualisation and measurement of the microstructural kinetics of granular materials induced by deformation improves our understanding of why the material sometimes blocks and sometimes unexpectedly releases the flow – problems common to volcanoes1 and to casting processes. 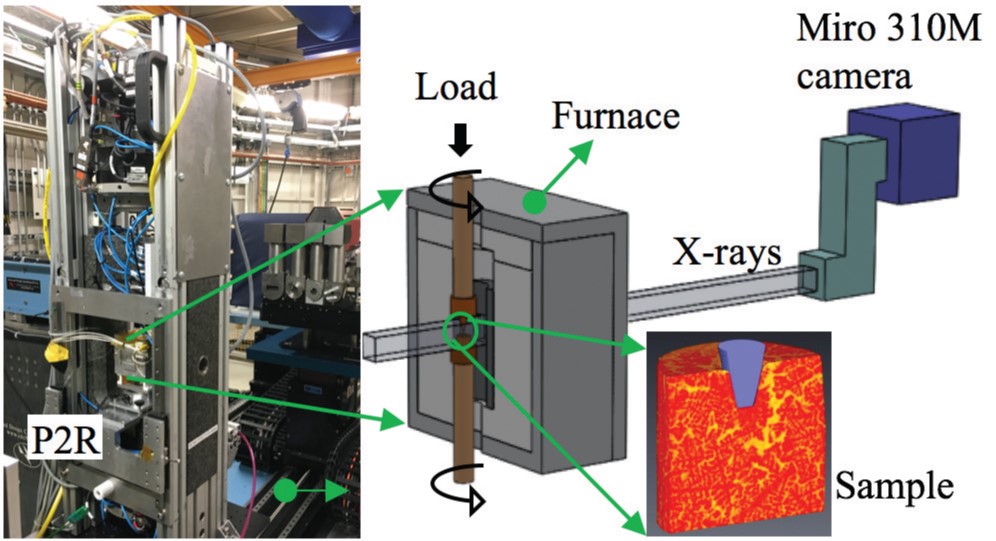 Figure 1: The P2R thermo-mechanical rig2 on I12 together with a schematic of the furnace and imaging chain.

A processing rig replicates the thermal and mechanical conditions for the semi-solid material close to the circumstances during the industrial process. It allows us to take X-ray tomographic images of the semi-solid material during controlled temperatures and strain rates at a time resolution of few seconds (termed 4D synchrotron X-ray imaging). The rig, named P2R2, (Fig. 1) was installed in the beamline I12 to apply the in-situ deformation by means of a ceramic cone that is slowly pressed into the sample. This kind of indentation test is a well-established technique for probing local plastic deformation and characterising the hardness and other material properties of solid samples; here we use it as a means of a controlled shear and macroscopic displacement of partial sample volumes, while the upper surface next to the cone remains unconstrained. The final aim is to observe the local deformation of individual grains and the surrounding liquid under these conditions. Solid and liquid phases have different compositions and can therefore be distinguished in the X-ray images, together with eventually appearing voids and cracks.

The chosen material system here was a Al-Cu-alloy (85 % by weight Cu and 15 % Al). It was heated to a temperature of 555 °C which is about 50 °C below the liquidus and 5 °C above the solidus, making up a mix with a solid fraction of around 73%. The grain shape was globular.

In the time-resolved set of tomographic data it was possible to observe how microstructure evolves and how defects within form. From the incremental displacements between adjacent tomographic volumes the microscopic strain throughout the volume was calculated, by applying the method of digital volume correlation (DVC).

One observation is the occurrence of grain re-arrangement and the subsequent opening of liquid channels (called dilatancy) that absorb the liquid phase and consequentially enrich them in copper and simultaneously create empty volumes elsewhere. These processes were observed on the microscopic level and detailed mechanisms of grain re-arrangement were quantitatively mapped. 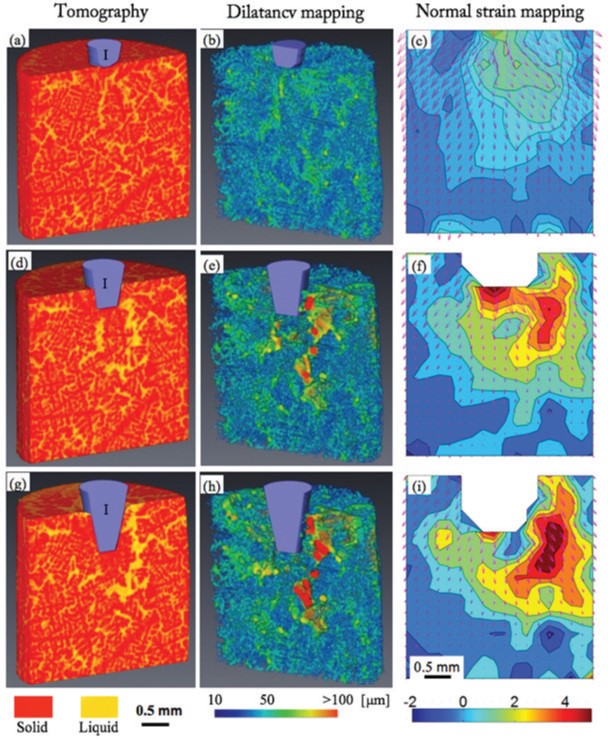 Figure. 2 shows the three of the many tomographic volumes captured during the indentation process along with the measurement results. The opening of liquid channels (dilation) close to the indenter can be clearly observed (left column of Fig. 2 depicts solid and liquid fractions) and quantified in the middle column of Fig. 2. The right column shows the development of velocity and strain fields as calculated using DVC. The areas of high strain underneath the indenter illustrate the onset and development of strain concentration (Fig. 2 (f, i)). 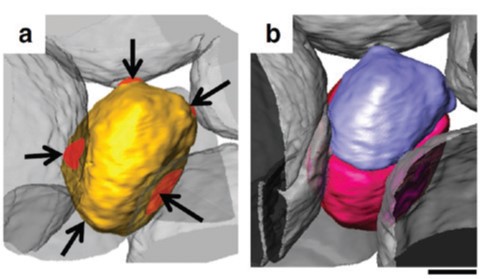 Figure 3: 3D visualisation of transgranular liquation cracking. Rendering of a grain cracking into two during indentation: (a) initial arrangement at zero indentation, with the contact areas in the field of view coloured red and (b) cracked morphology at 144 μm indentation. Scale bar 200 μm.

One surprising result is the transgranular cracking of individual grains through the process of transgranular liquation cracking (TLC). This complex mechanism (Fig. 3) is a coupling between mechanical and chemical effects. The four stages during TLC are therefore hypothesised: motion and pinning of grains resulting in compressive and shear loads; dislocation generation, leading to surface perturbations and internal preferential crack paths; remelting at the surface perturbation; and crack growth from the surface of the grain accelerated by liquation.

These experiments have revealed the multitude of deformation mechanisms occurring at a microstructural level during semi-solid processing, including: dilatancy, liquid flow, macrosegregation, damage void formation, and intra-granular deformation3 and allowed observation of a novel mechanism, trangranular liquation cracking. The investigations have also allowed quantified the strain fields within the material as these mechanisms occur. The study demonstrates the advantage of combining multiple complementary techniques to gain new insights into the mechanics of semi-solid granular materials.

The authors acknowledge the EPSRC (EP/I02249X/1, EP/K007734/1) and Research Complex at Harwell for support. We thank Diamond Light Source for beamtime (visit EE9018-1) and Vision Research UK for the loan of the Miro 310M. B.Cai thanks General Electric and China Scholarship Council for funding his PhD.