Improving Catalysts for the Production of Green Hydrogen

To reduce the effects of climate change, and improve our energy security, we need to move away from a dependence on fossil fuels and increase our sources of renewable energy. However, green energy sources are by nature intermittent - dependent on day/night cycles, weather or season - and cannot always produce energy in line with demand. Therefore, the electricity grid will require systems capable of storing energy surpluses for use when production cannot keep pace with demand. Potential storage methods include batteries, pumped-storage hydroelectricity, and green hydrogen. Green hydrogen is hydrogen produced using renewable energy sources. The most efficient production method is electrolysis, using an electric current to split water into hydrogen and oxygen. The hydrogen is stored until needed and can then be fed into a fuel cell to reverse the process, producing electricity and water, for instance to be used to power vehicles. Hydrogen can also be inserted in the gas grid (replacing natural gas for heating) and used in industrial processes. There are several methods of water electrolysis, but Polymeric Membrane Water Electrolysis (PEMWE) has several advantages, including being able to produce large quantities of hydrogen quickly. However, it relies on expensive Platinum group metals (PGM)– platinum and iridium – as others quickly degrade. In work recently published in the Journal of Power Sources, researchers from the Instituto de Catálisis y Petroleoquímica in Madrid, King Abdulaziz University in Saudi Arabia and Diamond's VerSoX beamline investigated new materials to improve stability and longevity of the electrodes (catalysts) used during green hydrogen production. This is the first published paper to include data collected from VerSoX Branch B, which is co-funded by the University of Leeds. 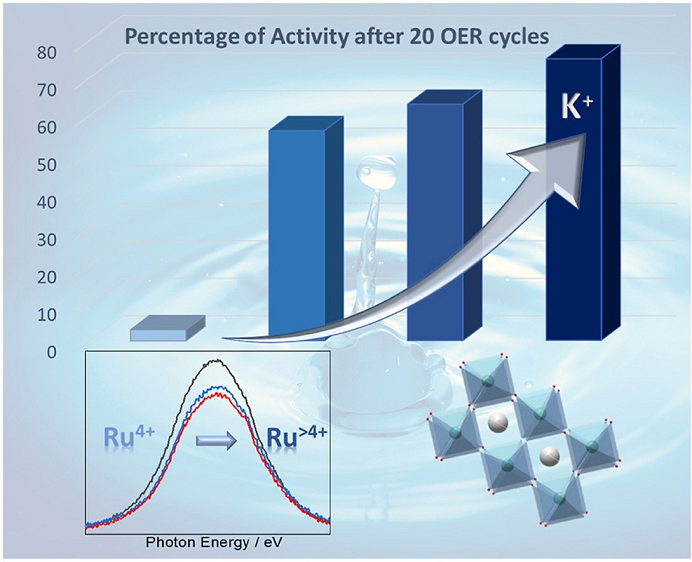 During water electrolysis, two chemical reactions take place. In PEMWE the Oxygen Evolution Reaction (OER) produces oxygen gas, protons, and electrons at the anode. The Hydrogen Evolution Reaction (HER) combines protons and electrons to produce hydrogen gas at the cathode. The OER is slower and is, therefore, the limiting reaction for hydrogen production. So higher amounts of electrocatalyst are used in the anode to offset this difference. However, the environment around the anode is highly acidic and oxidising and most electrocatalysts rapidly degrade, with iridium catalysts the only ones that can be used commercially.

Ruthenium-based electrocatalysts are the most active electrocatalysts for the OER. However, they are generally very unstable and degrade after a short period of time. This instability seems to be linked to the oxidation of ruthenium at high voltages, which forms ruthenium oxide species that dissolve in the acid medium. The activity and stability of ruthenium also depend on the ruthenium compounds used (metallic ruthenium, ruthenium perovskites, etc.) and how they are prepared.

Doping certain electrocatalysts with foreign cations is one potential method for enhancing stability. In this study, the team synthesised a series of Sr1-xKxRuO3 (x = 0.00, 0.05, 0.10 and 0.20) perovskites and tested their performance in the OER in acid electrolyte. In order to investigate the oxidation state of ruthenium inside the perovskites, the team used Near Edge X-ray Absorption Fine Structure (NEXAFS) spectroscopy on Diamond's new VerSoX B07-B beamline.

Branch B of beamline B07 (also known as the Versatile Soft X-ray beamline) welcomed its first users in May 2021. The new high-throughput NEXAFS end station, where the experiments were performed, is a collaboration with the University of Leeds with the aim to develop a world-leading facility for multidisciplinary research. The end station operates at near ambient pressures, allowing rapid sample turnaround - a game-changing advantage compared to conventional ultra-high vacuum NEXAFS stations.

Finding new materials for the anode is key to scaling up water electrolysis for commercial production of green hydrogen. Using VerSoX allowed us to see the very small shifts in the oxidation state, which is crucial to understanding the correlation between oxidation states and catalytic activity. We haven't seen these shifts using other techniques.

The results clearly show that K-doping stabilises Ru with higher oxidation state inside the perovskite structure and makes the catalyst more durable. In fact, the durability of the catalyst increases with K content. This study indicates that the chemical modification of ruthenium perovskites is a suitable strategy for improving the stability of ruthenium during the OER.

Our collaborations with Diamond are always very fruitful, producing excellent results. During the Covid-19 pandemic, beamline staff have been able to run experiments for us so that we can continue our work. We're looking forward to visiting in person again in the future.

The results of this study showed that partial doping with K+ cations in SrRuO3 resulted in higher OER activity and durability. However, the improvement is not yet good enough for commercial green hydrogen production, and so the team are continuing to investigate other oxide compounds. The ultimate goal is to replace ruthenium altogether by no PGM elements, allowing green hydrogen to provide low-carbon energy and fuels when and where we need them.

The researchers acknowledge PROMET-H2 project (No 862253) funded from the European Union’s Horizon 2020 research and innovation programme, the Deputyship for Research & Innovation, Ministry of Education of Saudi Arabia for the project number 341, and the Spanish MICIUN for the project PID2019-103967RJ-I00 and PID2020-116712RB-C21.