A biochemical switch in infectious proteins may lead to neurodegeneration

Prions are the only proteins known to be infectious. Although the function of prions in healthy people is not known, they can cause neurodegeneration if their structure becomes altered into an infectious shape. Identifying biochemical triggers for these altered structures will be important in controlling prion disease. In collaboration with beamline B23, an international team of scientists from Belgium, Portugal, Switzerland, and the UK have recently reported one such trigger for altered prions in the journal Nature Structural & Molecular Biology. They discovered the formation of a latch that bridges together different regions of the prion protein. By virtue of the high flux and collimation of the ultraviolet beam at the B23 beamline, the researchers were able to use circular dichroism, a technique involving circularly polarized light, to map wide-reaching changes in prion structure responsible for its toxicity. Identifying the cascade of events that alter prion structure is paramount to the development of diagnostic and therapeutic interventions. 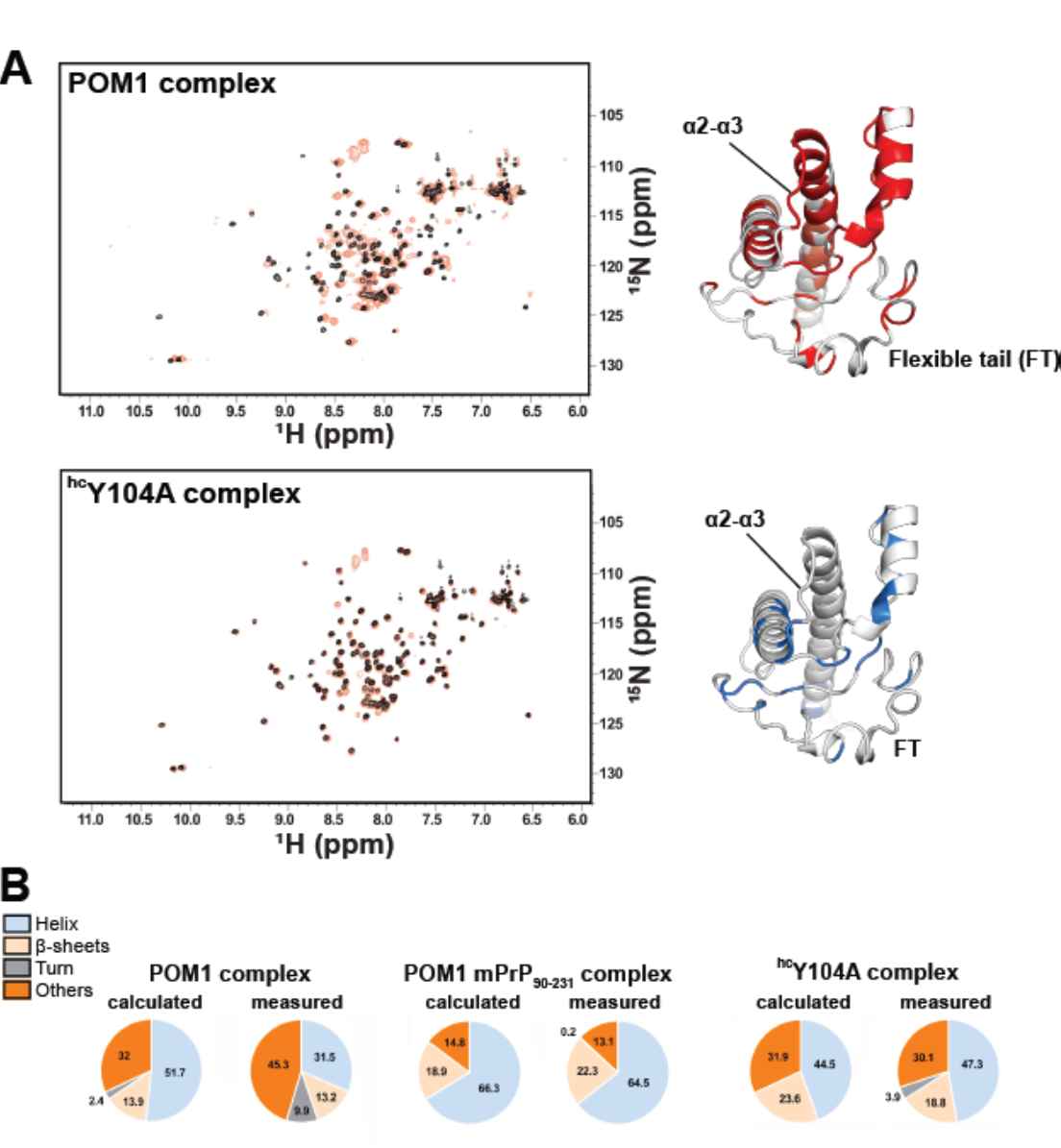 Antibody binding causes allosteric conformational changes in the GD and FT.
a, Comparison between the [15N,1H]-TROSY spectra of free rmPrP90–231 versus that bound to the hcY104A pomolog. Chemical-shift differences, reflecting subtle alterations of the local chemical structure, were visible not only in the epitope but also at distant sites in the GD and FT. Residues affected by antibody binding are in color on PrPC (GD and part of the FT are shown on a MD model of PrP). Differences between toxic and protective antibodies are evident in the α2–α3 loop (the Y104A complex is identical to free PrPC) and in the FT region closer to the GD. b, Content of secondary structure estimated from CD spectra of the rmPrP–pomologs complexes. ‘Calculated’ indicates the secondary structure content if the rmPrP and pomolog did not change upon binding. POM1 displayed increased content of irregular structure (measured versus calculated) when in complex with full rmPrP23–231, but identical content when in complex with a construct lacking the FT (rmPrP90–231). This indicates that the FT changes conformation upon POM1 binding. Conversely, no differences were detected with the protective pomolog hcY104A.

Neurons contain a protein called prion and, although we do not know how it functions in healthy people, it can cause severe neurodegeneration. Prions adopt abnormal shapes and this causes them to become infectious. Altered prions can convert normal prions and amplify in number at an accelerating rate. Large aggregates of infectious prions eventually form and damage brain architecture. Infectious prions have caused mad cow disease in cattle and kuru in humans — diseases that are invariably fatal. To treat prion disease, scientists need to understand what triggers the protein to change shape as these triggers could be used to detect the disease early. Understanding how prion structure changes can be useful for designing therapies that block the process.

Prion proteins have a rounded head region and a flexible tail and antibodies have been discovered that bind the head region. Antibodies are immune responders that specifically attack invading microbes (e.g. bacteria) but occasionally attack our own proteins. The prion antibody eluded researchers because it led to prion disease without directly morphing healthy prions into infectious prions. Instead, computer simulations of protein structure showed that the binding of the antibody altered the flexibility of the prion head region and induced the formation of a latch that bridged together two regions of the protein.

Formation of the latch leads to prion disease

The researchers wondered if this latch could predispose prions to adopt the infectious shape when encountered by infectious prions. Mutant prions were generated that either induced or prevented formation of the latch and these were used to inoculate cultures of brain tissue alongside infectious prions. Neurodegeneration was accelerated by the latch-inducing mutant but was delayed by the latch-preventing mutant, suggesting the latch is a trigger. A further comparison of prion structure from individuals with a hereditary predisposition to prion disease revealed mutations that could be prone to latch formation. Identifying the latch could be important for early detection of prion disease or designing inhibitors of infectious prions. To determine how the latch alters the fate of the prion, it is important to understand what changes occur following latch formation. The team at B23 investigated how the latch induces a change in prion structure.

B23 uses circular dichroism to study protein structure in solution, including the presence of irregularly shaped regions that often cannot be studied by other techniques, such as X-ray crystallography. The team compared the structure of the prion and the prion antibody when separate and bound together because latch formation only occurs in the bound state. The prion contained more irregularly shaped regions when bound to the antibody. However, no change in prion shape was observed between separate and bound states if they used a latch-preventing mutant in its place, indicating that the irregular structures appear following latch formation. To determine if the irregular structures were in the flexible tail or rounded head region, the tail was removed from a latch-forming mutant and irregular structures did not appear in the bound state. This revealed latch formation in the head region led to changes in the distant tail region of the prion.

Although benchtop circular dichroism equipment is available, this work could only be done using the optimised beam at B23.

The high flux and collimation of the microbeam at B23 can be used to collect more information from a very small amount of sample. As it was challenging to purify these proteins in separate and bound states to a high yield, B23 was crucial for studying the dynamic structural changes that correlate with prion toxicity.

By removing the need for large yields of prion and prion antibody, the team were able to design elaborate experiments to map the location of changes in the prion protein. The discovery of the latch and successive changes to prion structure have spurred on drug discovery efforts and preliminary findings indicate that two drugs may hold promise for controlling prion disease.