In humans, Immunoglobulin (IgG) is the most common type of antibody found in blood circulation. IgG molecules are created by plasma B cells, and there are four subclasses. Of the four, IgG3 is the least understood. It has a uniquely long hinge region separating its Fab antigen-binding and Fc receptor-binding regions. The presence of this elongated hinge makes it challenging to perform structural studies, for example, with X-ray crystallography. Due to this lack of structural information, IgG3 is the only subclass not currently exploited for therapeutic uses. In work recently published in the Journal of Biological Chemistry, researchers from University College London and the University of Birmingham have used a combination of imaging and analytical methods to provide the first experimentally determined molecular structural model for a full-length IgG3 antibody. This new information should enable the use of IgG3 to develop new therapies and antibody tests.

Getting a good look at IgG3 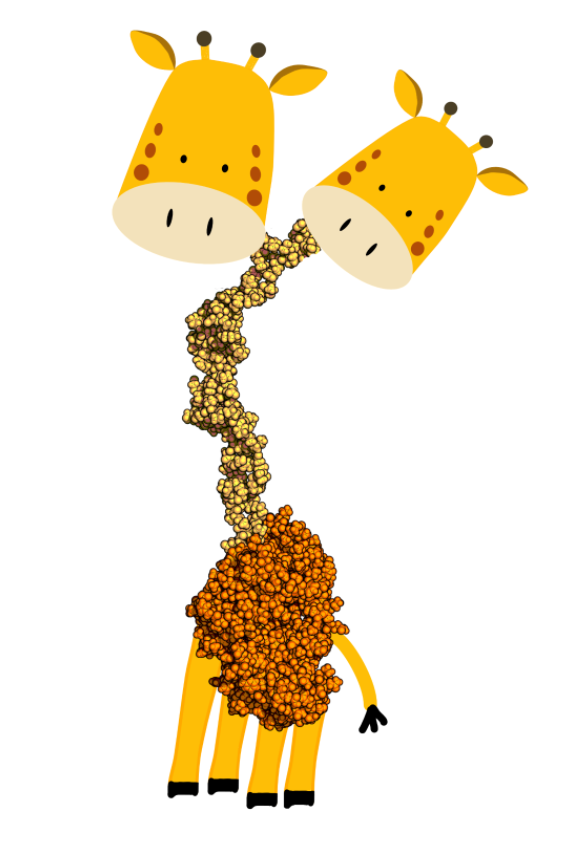 The IgG3 structural model is formed from two globular Fab regions, a long hinge in the centre, and one Fc region, as shown from the scattering modelling fits. The structure is reminiscent of a giraffe with an extended and semi-rigid neck. Image credit: Dr Valentina Spiteri, UCL.

A high-resolution structure for part of the IgG3 molecule, the globular IgG3-Fc fragment, is available. And previous studies of the whole molecule using Small Angle X-ray Scattering (SAXS) and analytical ultracentrifugation (AUC) showed that IgG3 is elongated compared to IgG1, IgG2 and IgG4. SAXS also showed that IgG3 has a more extended central hinge than IgG1 and IgG2 that links its three globular regions together.

They used AUC to provide overall structures for IgG3 in solution and confirmed that it forms particles of uniform size (i.e. it is monodisperse). Using analytical ultracentrifugation allowed them to determine the elongated structure of IgG3 from the reduced values of its sedimentation coefficients.

They collected SAXS data sets on Diamond's B21 beamline in high positive solute-solvent contrast, which accentuated the hydrophilic surface regions of the glycoprotein. SANS measurements using heavy water buffers and high negative solute-solvent contrast emphasised the contribution of the buried hydrophobic core of the glycoprotein. SAXS can detect the tightly bound hydration layer because its electron density is similar to that of the protein and not bulk water. The same layer is almost invisible to SANS in heavy water, as its nuclear density is nearly the same as that of bulk water.

Using the relatively recent development of atomistic modelling based on computational molecular dynamics and Monte Carlo methods to fit the scattering curves, the SAXS and SANS data sets can be represented as molecular structures.

The antibody with the long neck

The results of this joint AUC-SAXS-SANS approach confirm that the IgG3 molecule has a semi-rigid hinge with little disorder, and it results in a wide separation between the globular Fab and Fc regions. This study was the latest in a series in which the team has determined the first atomistic solution structures for all four human IgG subclasses and clarified their molecular functions.

These experiments allowed us to complete the basic groundwork on IgG molecules. The working models we've produced will enable further research. We're hoping that the antibody industry can use it to exploit IgG3 for new therapies and antibody tests, as they already do for IgG1, IgG2 and IgG4. Prior to the Covid-19 pandemic, our team visited Diamond three or four times a year, and we have plenty of experiments ready to run when we can visit again!

To find out more about the B21 beamline or discuss potential applications, please contact Principal Beamline Scientist Nathan Cowieson: nathan.cowieson@diamond.ac.uk