In 2018, in England alone, there were an estimated 61,000 antibiotic resistant infections - a 9% rise on the previous year. Infections that don't respond to antibiotics have the potential to cause bloodstream infections and may require patients to be admitted to hospital. The numbers of antibiotic-resistant bloodstream infections rose by a third between 2014 and 2018. The rise in antibiotic-resistant bacteria is a growing concern worldwide, prompting a search for new antibiotics and alternative strategies for fighting bacteria. One promising approach is the design of lipid-based antimicrobial nanocarriers. However, most of the polymer-stabilised nanocarriers are cytotoxic. In work recently published in  Advanced Functional Materials,  a team of Swiss researchers designed a novel, stabiliser-free nanocarrier for the antimicrobial peptide LL-37 that also promotes wound healing. They demonstrated that stabiliser-free cubosomes show promise as advanced cytocompatible nanovehicles for nutrient and drug delivery.

Harnessing the power of the innate immune system 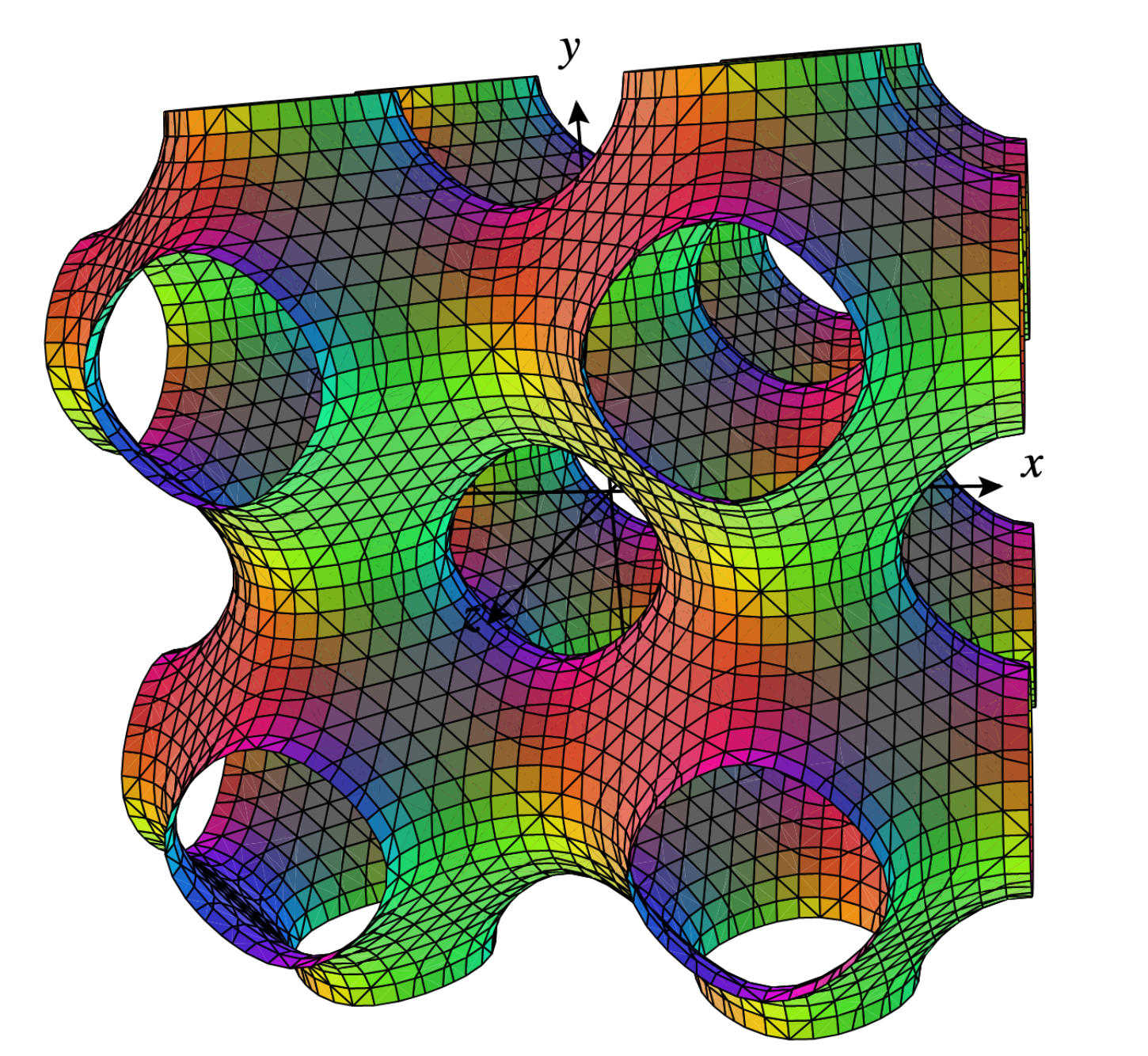 Fig. 1: Graphical representation of a cubosome. The coloured surface resembles the lipid-water interface with the confined water channels. The channel diameter is typically in the range of 10 nanometres, with the overall size of the cubosomes being several hundred nanometres.

Vertebrates have two main immune strategies. In simple terms, the adaptive (or acquired) immune system responds to specific pathogens by producing antibodies. The innate immune system is older (in evolutionary terms) and is found in all kinds of life, from plants and fungi to insects and multicellular organisms. The innate immune system makes use of less specific defence mechanisms, including physical barriers (such as skin or bark), clotting factors in blood or sap, and specialised cells that attack foreign substances.

Antimicrobial peptides (AMPs) are part of the innate immune system of a wide range of organisms. As AMPs have multiple antibacterial mechanisms, bacteria are less likely to develop resistance against them. The human AMP LL-37 has antimicrobial effects and enhances cell migration and proliferation, which makes it attractive as a therapeutic agent. However, therapeutic applications of AMPs have been hindered by their low solubility in water and their lack of stability in biological environments.

Encapsulating AMPs into suitable nanocarriers is a promising solution to these issues. However, such nanoparticles commonly use polymer surfactants such as F127 as a stabiliser, and F127 shows toxicity towards mammalian cells. Hence, the goal of this study was to design novel, stabiliser-free antimicrobial nanocarriers for the encapsulation of LL-37.

Previous research has shown that LL-37 can be incorporated into cubosomes. Cubosomes are highly stable nanoparticles that contain a self-assembled lipid cubic structure with a network of nano-scale water-channels in their interior (Fig. 1). Formed from the lipid cubic phase, the composition of cubosomes can be tailored, for instance, to steer the dimensions of the water-channels inside the cubosomes, or integrate bioactive molecules. The polymer-based outer corona used to stabilise the cubosome could also be used for targeting. The unique microstructure of cubosomes is biologically compatible, and they show great promise for controlled and targeted drug release and delivery.

For this study, the team designed stabiliser-free cubosomes by dispersing the glycerol monooleate bulk phase in water using ultrasonication with an optimised dispersion protocol. They used small angle X-ray scattering (SAXS) on beamline I22, together with cryogenic transmission electron microscopy and light scattering techniques to investigate the nanostructure, morphology, and stability of the cubosomes.

According to author Prof Stefan Salentinig:

Discovering the nano-scale geometries of the antimicrobial nanocarriers, and their dynamic changes upon modification of composition were key for the rational design of these advanced biointerfaces. The high brilliance source with the high resolution in both space and time at Diamond’s I22 beamline were crucial for this understanding.

The researchers found that their novel cubosomes were stable for several weeks and that adding LL-37 to the aqueous phase of the dispersion led to the spontaneous integration of LL-37. The resulting antimicrobial nanocarriers showed substantial antibacterial activity against Escherichia Coli and Pseudomonas aeruginosa strains, even outperforming the free peptide. The team were also able to demonstrate that they are non-toxic and promote cell proliferation - which could boost wound healing.

By combining antibacterial properties with the promotion of cell proliferation, these stabiliser-free cubosomes have potential as advanced wound healing materials, and nanovehicles for nutrient and drug delivery.

For further information about this project, please contact Stefan Salentinig, Professor of Physical Chemistry at the University of Fribourg, Switzerland stefan.salentinig@unifr.ch.

To find out more about the I22 beamline, or to discuss potential applications, please contact Principal Beamline Scientist Nick Terrill nick.terrill@diamond.ac.uk.