The Nitschke Group at the University of Cambridge designs hollow molecules that act as capsules or cages that enclose guest molecules. These cages have exciting potential applications in a variety of fields. They could, for example, be tailored to deliver drugs to where they are needed or to remove a pollutant molecule from a solution. In work recently published in the Journal of the American Chemical Society, the team report on the exciting discoveries they have made using hierarchically-nested host molecules, with an outer host encapsulating an inner host, which holds the guest molecule. In their newly-designed 'Russian doll' molecules, they found that encapsulation can improve the binding properties of the inner host. Their results also present a novel way to fix the stereochemistry of a host framework. Such molecules could be used in applications that rely on molecular-recognition, such as catalysis, separations, drug delivery, and sensing.

All of the cages the Nitschke Group design self-assemble from simple building blocks. Designing them requires a thorough understanding of the geometry of the precursor molecules and how they stick together, so that the design for the final cage molecules is essentially 'programmed' into the building blocks. These cages can be designed as large molecules, and to have a range of guest-binding abilities.
In this work, the aim was to encapsulate the hollow cryptophane-111 (CRY) molecule inside a triazatruxene-based FeII4L4 capsule molecule. Cryptophanes are a type of covalent cage built Using two cyclotribenzylene units. They can encapsulate small molecules (e.g. methane or xenon), in addition to cations and anions.
Many cryptophanes are chiral molecules, with an asymmetry that means that the molecule and its mirror image can't be superimposed. (The classic example of chirality is the human hand - our left hand is a non-superimposable mirror image of our right hand.) A chiral molecule and its mirror image are referred to as enantiomers.
Chirality - or 'handedness'- can be very important. In the late 1950s and 1960s, a drug called Thalidomide was prescribed to pregnant women to control morning sickness. However, Thalidomide is a chiral molecule, and while the left-handed version is a useful drug, the right-handed version is toxic and caused severe birth defects in thousands of children. 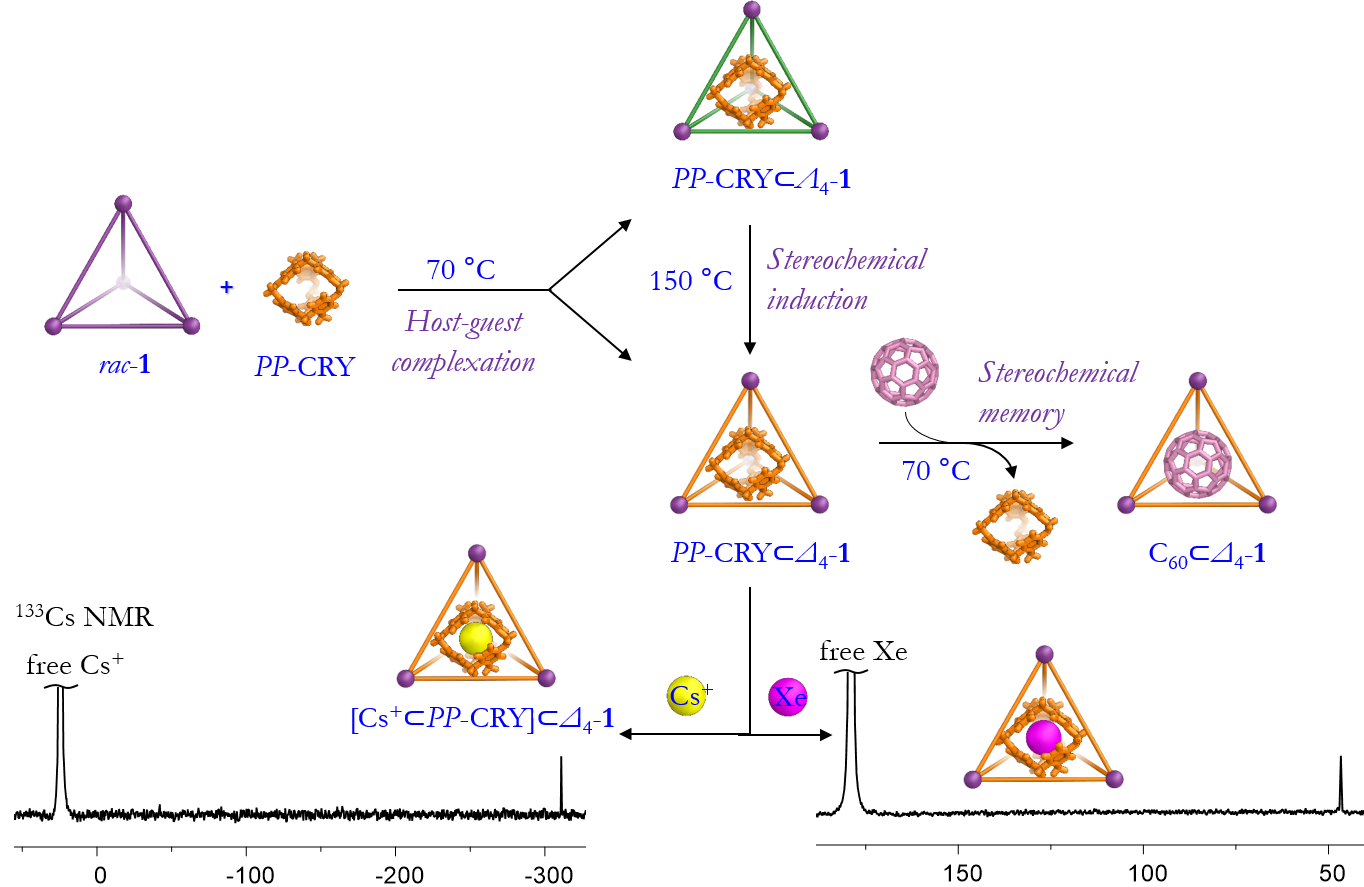 As you can imagine, a guest molecule enclosed within a capsule within an outer cage presents a hugely complex structure. The Nitschke Group have BAG access to beamline I19, bringing samples to Diamond for crystallography every few months.
Prof Jonathan Nitschke says:

Dr Tanya Ronson is a brilliant crystallographer, and she and her team used diffraction to solve the structure of the crystal that Dr Dawei Zhang grew. That told us the handedness of the molecules, and we were able to see the caesium cation guest within the structure.

I19 is a marvellous facility, and we have a great working relationship with the beamline staff. The results we obtained at Diamond allowed us to see all of the details of the structure, and gave us a great deal of certainty.

Both the guest and host molecule are chiral, and the guest molecule prefers to be encapsulated by one version of the host. The results showed that the guest molecule rearranged itself in the solution to accommodate that preference - something which the team hadn't seen before.
Designing a host molecule that can discriminate the chirality of the guest molecule (enantiodiscrimination) opens up significant possibilities for (e.g.) purifying drug compounds so that they only contain the useful variant of the molecule. The team is now focusing on this avenue of research, as well as the wider field of chemical purification. Cage molecules could work well in closed-loop environments, for example, requiring far less energy than current purification systems.
To find out more about the I19 beamline, or to discuss potential applications, please contact Principal Beamline Scientists Dave Allan dave.allan@diamond.ac.uk.