Cystic Fibrosis (CF), the most prominent lethal genetic disorder in western countries, is caused by mutations in the gene that encodes the cystic fibrosis transmembrane conductance regulator (CFTR) protein. Although there are hundreds of different mutations that cause CF, the most common is F508del, which affects the first nucleotide-binding domain (NBD1). Nearly two-thirds of cases worldwide occur in patients who have inherited two copies of this mutation, one from each parent. This mutation means that the CTFR protein fails to fold properly (i.e. it does not take on the correct shape) and degrades more quickly. The result is increased water retention in cells and a corresponding dehydration of the extracellular space leading to thickening of the mucus in key organs such as the lungs, where it leads to respiratory deficiency and frequent respiratory infections that eventually turn fatal. Current treatments that aim to correct CTFR have limited effect, and we don't fully understand their mode of action. In work recently published in Nature Communications, an international team of researchers used macromolecular crystallography (MX) to uncover more details about the structure of CTFR and to investigate the potential of using nanobodies to stabilise the protein and therefore treat the disease. 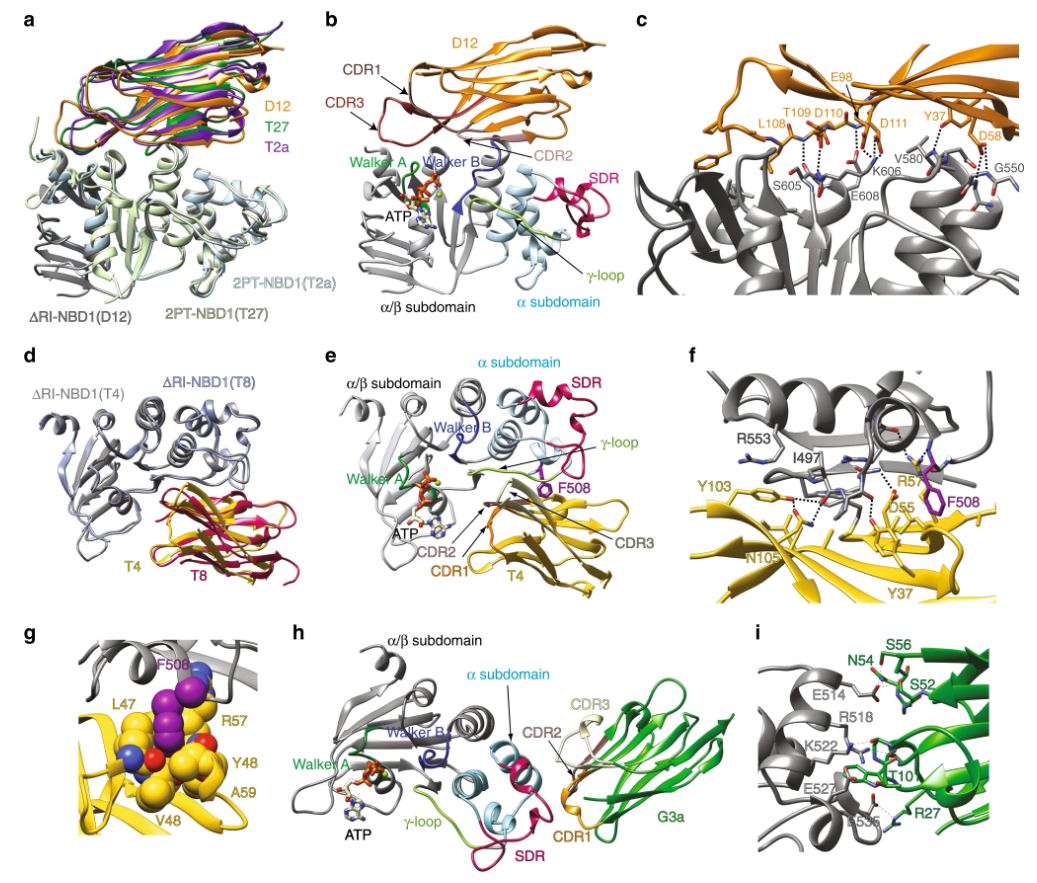 Recent research has shown that the relative instability of the CTFR protein and its intrinsic dynamics are at the heart of CF, and that the F508del mutation causes thermodynamic instability in NBD1. It is possible to compensate for this destabilising effect by artificially introducing specific mutations into NBD1, but the development of NBD1 "chaperones" remains an underexplored therapeutic route. Studies have shown that some small compounds have a slight stabilisation effect, but only at very high concentrations that would prevent them from being used therapeutically.

In this work, the research team demonstrated that both isolated NBD1 and of full-length CTFR can be stabilised using nanobodies. A nanobody (also known as a single-domain antibody (sdAb)) is a fragment of an antibody that can selectively bind to a specific antigen. Like complete antibodies, nanobodies will bind to a particular region - known as an epitope - on the antigen. Nanobodies can be easier to produce in vitro in large amounts, which makes them ideal for research. The first nanobodies were engineered from antibodies found in camelids (camels, dromedaries and llamas). The nanobodies used in these experiments came from llamas.

The molecular basis for stabilisation

With a body of research showing that nanobodies are excellent stabilisers, the team generated nanobodies for CTFR. Their aim was to isolate CFTR-specific folding chaperones for F508del that might allow the damaged protein to function more effectively. To characterise the structure of their nanobodies, they collected high-resolution X-ray diffraction data on Diamond's MX beamlines I02, I04 and I24, and also at SOLEIL in France.

Obtaining high-resolution structure of our nanobodies in complex with NBD1 was key to understanding the process of stabilisation, which will open new therapeutic routes against CF. X-ray crystallography remains the best way to solve the structure of small to medium-size proteins and as such, having access to high-end MX beamlines such as the ones in Diamond is paramount. The quality and ease of access (especially for remote access, which saves a lot of travelling time) at Diamond is second to none and was an asset to the success of our project.

The team were able to demonstrate the ability of several NBD1-nanobody complexes to thermally stabilise CFTR significantly. Examining the crystal structures of their NBD1-nanobody complexes provided an atomic description of the epitopes and revealed the molecular basis for stabilisation. The data also uncovered an unexpected conformation of CTFR that differs from the compact assembly previously observed using cryo-electron microscopy. CFTR is a highly dynamic protein, even in healthy bodies, and this new data will add to our understanding of its normal function and its role in CF.

Scientists are currently developing nanobodies as potential treatments for a variety of diseases. However, correcting the F508del mutation requires intracellular action. We have various tools that can introduce antibodies into cells, but this is a significant challenge and is likely to remain so for some considerable time. The use of small molecule compounds is currently the method of choice, and although small molecules with sufficient potential to stabilise CFTR have not yet been identified, the crystal structures described in this research may offer a new route for rational drug design.