Scientists have discovered how the most abundant marine bacteria – fundamental to life on Earth – can extract all phosphate from seawater using positive charge of their cell membrane.

The findings, which have been published in Nature Communications, show how a bacterial cell enveloped in two layers of membrane uses its energetic capacity to positively charge the inner membrane in order to extract negatively-charged phosphate from seawater. The acquired phosphate is then stocked inside the bacterial “skin” - the periplasmic space between the outer and inner membranes. This is contrary to long-held view that bacteria acquire phosphate by keeping the periplasmic space void of phosphate to make it diffuse from the outside.

Lead author of the study, Prof. Mikhail Zubkov, a microbial biogeochemist at the Scottish Association for Marine Science, said:

The discovery has global importance because in the ocean the capacity to acquire phosphate dictates the success of bacteria, which are at the base of the marine food web as well as being major oxygen producers on Earth.

We have known about phosphate-depleted regions in the subtropical North Atlantic, where we conducted our field studies. But until now, no-one knew how bacteria could acquire phosphate from seawater so severely depleted in phosphate.

The discovery was made possible through the development of ultra-sensitive techniques involving the consecutive labelling of tiny oceanic bacteria with radioactive isotopes of phosphorus and physical sorting of the labelled bacterial cells for measuring cellular radioactivity.

A co-author on the paper, Dr. Nina Kamennaya, from Ben-Gurion University of the Negev, added:

A combination of experiments with the oceanic bacteria and laboratory strains was essential to learn about the process, which becomes evident only at extreme conditions found at sea. 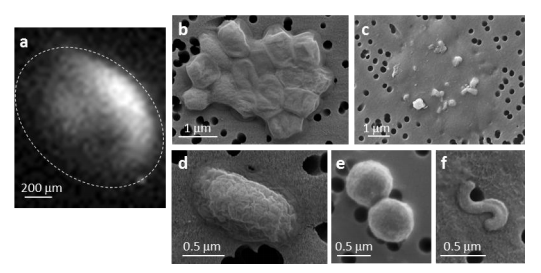 In order to quantify phosphorus content in cells of oceanic bacteria, Prof. Mikhail Zubkov and his colleague from the Diamond, Dr. Kalotina Geraki, developed a novel method. They used X-ray beam (I18) at Diamond to measure phosphorus in a known number of cells sorted on research cruises at sea.

Scientists believe that periplasmic accumulation of phosphate is inherently essential for bacterial cells, because it could conserve energy as well as store and attract the vital phosphate.

Retaining negatively-charged phosphate with a positive charge predates life as we know it. More than 3.5 billion years ago positively charged clay particles in cold seabed seeps could be viewed as primordial membranes of protocells. Their positive charge would similarly attract negatively-charged phosphate from seawater. The enrichment with phosphate might have been inherited by the first living forms, who gradually engaged phosphate as cell energy currency, in building membranes and eventually in storing genetic information.

Find out more about Microfocus Spectroscopy and I18 beamline at Diamond.