Getting zinc where it’s needed

Researchers concentrate zinc into the edible part of barley grains

Zinc deficiency is the third most common micronutrient deficiency globally, affecting roughly two billion people. Animal products are the best source of zinc, but may not be available to zinc-deficient populations, which often subsist on staple grains. A European research team has engineered barley to concentrate zinc in the endosperm of the grain rather than the outer layers, which are removed during milling. In a paper recently published in the Plant Biotechnology Journal, the team report on the success of this approach, including high-resolution measurements of zinc distribution throughout the grain made with the Microfocus Spectroscopy beamline (I18) at Diamond Light Source. Since GMO crops are not accepted in many countries, these findings will be used to help guide breeding efforts to increase zinc concentration in the edible portion of the barley grain.

The missing zinc
Roughly one-third of the world’s population suffers from zinc deficiency, which affects growth and development, impairs the nervous system, and reduces the immune response. While red meat can serve as a significant dietary source of zinc, many of the affected populations subsist primarily on staple grain crops. In grains, most of the zinc is in the outer layers, which are removed during milling, leaving only the zinc-poor endosperm for consumption. Milled grains therefore only offer people a fraction of the zinc taken up by the plant, limiting the value of these staple crops as a zinc source. 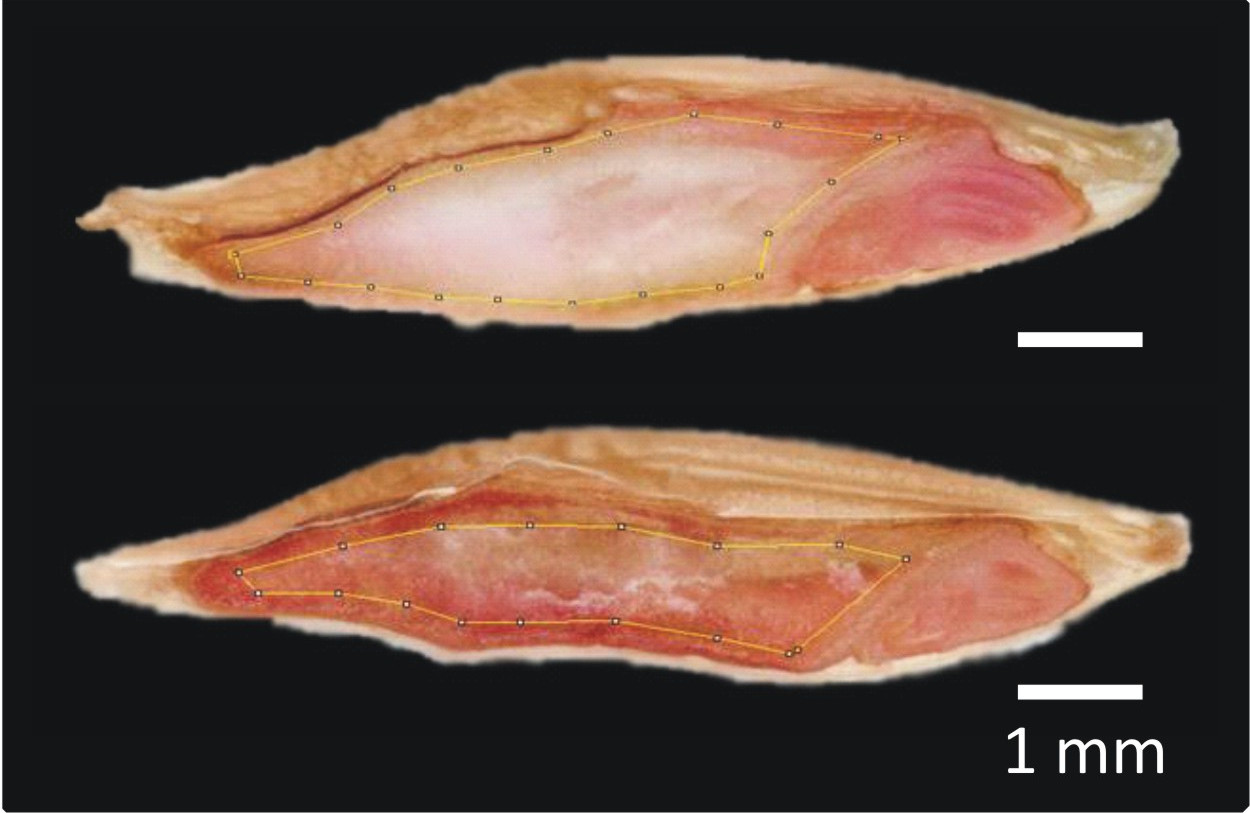 Figure 1: Barley grains cut in half and stained to show zinc in red. Analysis of the endosperm (outlined in the image) revealed more zinc in the genetically engineered line (below) than in normal barley (above).
Increasing the amount of zinc taken up by grain crops – for example, through fertilisation or breeding – can help alleviate the problem, but another remedy would be to redistribute the zinc in the grain to increase the fraction in the endosperm, a process known as biofortification. To accomplish this, a European research team used a zinc-specific transporter in barley, which has been recognised as a candidate for zinc biofortification when it was identified several years ago by Professor Dale Sanders’ lab at the John Innes Centre (JIC) and Dr Dorina Podar at Babeș-Bolyai University (BBU, Romania). In a project, which included collaborators in Denmark and was partially funded by the EU, the team engineered barley to express the transporter specifically in the endosperm in order to increase zinc accumulation in the edible part of the grain.
The researchers used three different techniques to measure zinc throughout the grains of the engineered lines and found a consistent increase in zinc in the endosperm. They began with a zinc-sensitive staining technique before carrying out more precise measurements using inductively coupled plasma optical emission spectrometry at the University of East Anglia and synchrotron X-ray fluorescence at Diamond’s Microfocus Spectroscopy beamline (I18). “The staining gave us a quick look, but it’s not very specific,” explained Dr Tony Miller, a senior researcher in Sanders’ lab. “Once we had evidence that our approach had worked, we followed up with imaging techniques that were more labour-intensive but gave us higher-resolution data to confirm what we were seeing with the staining.”
A first step
At Diamond, Drs Miller and Menguer used Diamond's I18 beamline to measure the X-ray fluorescence spectra of zinc and other elements across 70 µm-thick sections of grains from the engineered and normal barley plants. Their analysis revealed a major redistribution of zinc in the engineered grains, with up to 30% more zinc accumulating in the endosperm of these plants. These results matched what the team had found using spectrometry, but provided higher resolution data and did not require dissection of the grains, giving the team greater confidence in their findings.
Although zinc was concentrated in the endosperm of the engineered lines, the total zinc concentration in the grain did not increase. “There are limiting factors beyond the grain which control zinc delivery into the grain, and those are research targets that we’re now working towards,” said Dr Miller. “We’re hoping to return to Diamond to image lines with more total zinc in the grain, since we now know this measurement technique has worked very well for us.” In addition to trying to increase zinc accumulation in the grain, the team is also working with the Quadram Institute, one of JIC’s partners at the Norwich Research Park, to evaluate how well our digestive systems can take up zinc from the endosperm.
Despite its success, this approach cannot be directly used to biofortify zinc, since it relies on genetically modified plants, and GMO crops are not accepted for human consumption in many European countries, including the United Kingdom. Dr Miller described the work as a proof-of-principle study that could help guide further research. “The information that we obtained will help more conventional breeding strategies or maybe genome editing strategies to make crops that have higher levels of zinc in the grain,” he said.

To find out more about the I18 beamline, or to discuss potential applications, please contact Principal Beamline Scientist Prof Fred Mosselmans: fred.mosselmans@diamond.ac.uk