The whys of WipA

The structure of a pathogenic effector protein from Legionella pneumophila

London-based scientists have elucidated the structure of a large fragment of a bacterial protein, known as WipA, which is secreted by Legionella pneumophila. The work, recently published in the Journal of Biological Chemistry, showed that the protein possessed some fascinating features that gave valuable insights into its mechanism of action.
The bacterium, L. pneumophila, causes a severe form of pneumonia known as Legionnaires’ disease. The pathogenicity of this bacterium depends on the secretion of over 300 effector proteins into the host. One such effector, WipA, drew attention for its reliance on a chaperone complex (needed to ensure protein functionality) for its secretion and its unknown role in pathogenicity.

Two of the Macromolecular Crystallography (MX) beamlines (I02 and I04) at Diamond Light Source were used to initiate the study and solve the crystal structure of a large fragment of WipA. The structure showed that the protein possessed a serine/threonine phosphatase fold that surprisingly targeted tyrosine-phoshorylated peptides. Additionally, it was hypothesised that WipA could transition from a homo-dimeric state to a hetero-dimeric state to interact with a tyrosine-phosphorylated host target. The discoveries will help to clarify the molecular mechanisms underpinning Legionella pathogenicity and could aid the development of inhibitors.

Legionnaires’ disease can be lethal among vulnerable members of a population, and is particularly dangerous during hospital outbreaks. One of the main sources of Legionella infection is from water vapour in air-conditioning systems, boilers, hot baths and showers.
Once a host breathes in the infected vapour, the bacteria enter the lungs and seek out white blood cells, known as macrophages. The bacteria become engulfed by the macrophages, but instead of being killed by them, the bacteria cleverly employ a type IVb secretion system to secrete a huge array of effector proteins into the host cell in order to highjack the host’s cellular machinery and ensure bacterial survival. 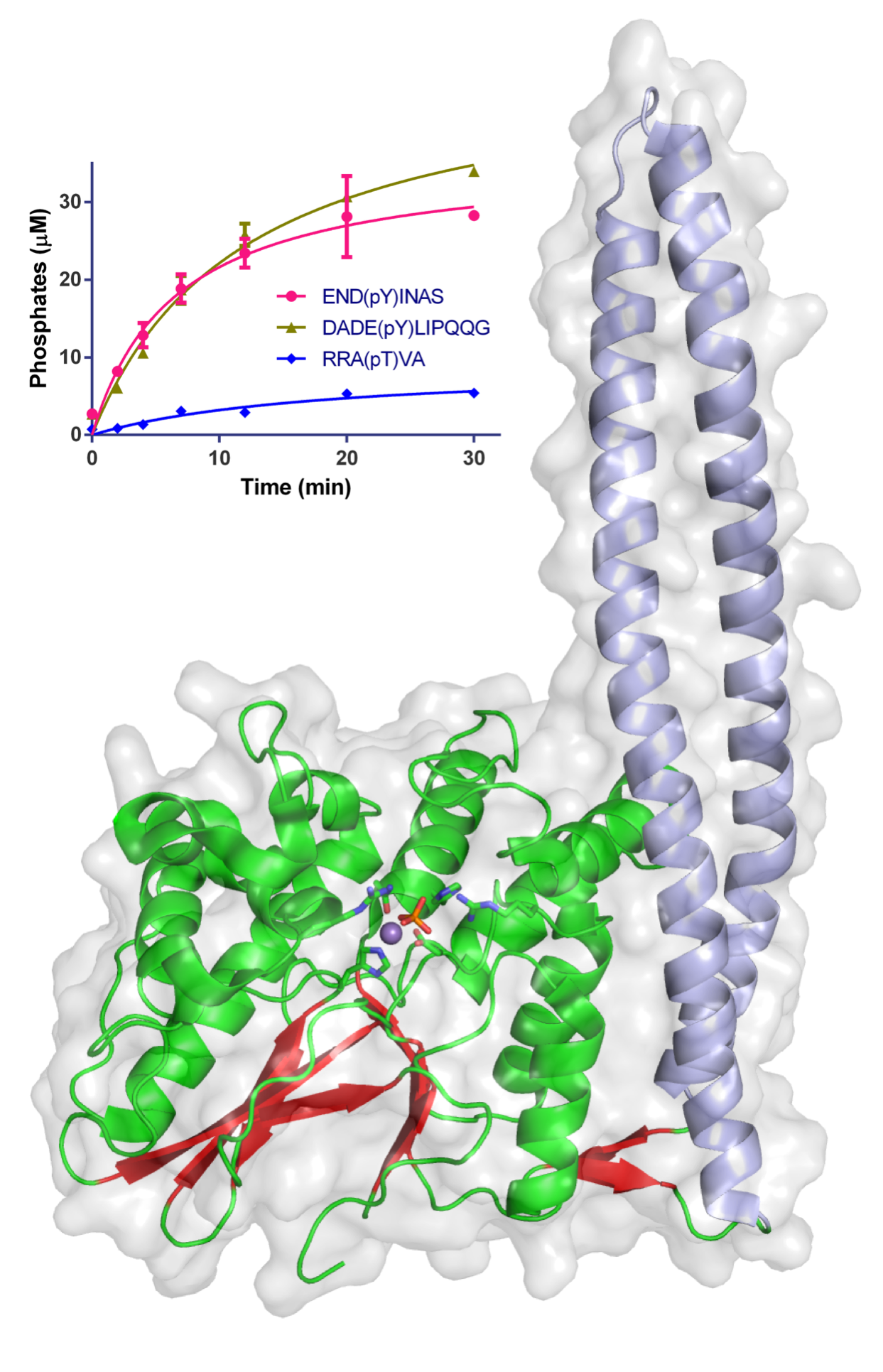 Figure 1: Structure of WipA in cartoon and semi-transparent surface representation. The phosphatase domain is represented in red-green and the attached coiled-coil in light blue. Residues involved in catalysis are represented as sticks around the Mn2+ and the phosphate ions. The surface is shown in light grey. The inset graph displays the time-course desphosphorylation of specific peptides using 20 nM of WipA.

Extensive screening
The major fragment of WipA was successfully crystallised by removing both termini of the sequence that predicted unstructured regions. The crystals were initially analysed at Diamond’s I02 and I04 beamlines, while the work was completed at the PetraIII P13 beamline at the European Molecular Biology Laboratory in Hamburg.
At Diamond, the Microfocus MX beamline (I04) was used for crystal screening and I02 was used for collecting diffraction data. Dr Nikos Pinotsis is a post-doctoral researcher in structural and molecular biology in the laboratory of Professor Gabriel Waksman at the Institute of Structural and Molecular Biology at Birkbeck/UCL and co-investigator of the study. He explained their approach, “Even though the size of the WipA crystals was sufficient for single crystal diffraction experiments, most of them displayed multiple and/or disordered lattices, therefore extensive screening was critical in successfully acquiring high resolution and quality data. We optimised our data-collection strategies to a beam size that fitted sufficiently the shorter of the crystal dimensions and optimised the beam by maximising beam and exposure time while minimising radiation damage.”
First of its class
The structure of the WipA fragment exhibited a phosphatase fold mounted on a helical hairpin, which was the first of its class. The core of this structure resembled a serine/threonine protein phosphatase, but biochemical experiments unexpectedly showed that it had a preference for tyrosine-phosphorylated substrates. This surprising observation had only been noted once before among several hundred similar phosphatases.
Dr Pinotsis explained the relevance of the findings: “Once the host target for dephosphorylation by WipA is known, inhibitors could be designed to inhibit that interaction. While it is possible that these findings might lead to the design of antibacterials, they mostly contribute to a general understanding of a bacterium’s survival and pathogenicity which is a very important first step to establish long-lasting treatments against infections.”
The team plans to identify the WipA target within host cells and will continue to explore further protein-protein interactions to provide a more complete view of the infection mechanism of Legionella.