From mobile phones to electric vehicles, Li-ion batteries are ubiquitous in today’s society. However these devices have been known to fail, sometimes in spectacular fashion, as seen recently in the Samsung Galaxy Note 7 smartphone recall. Now in a paper published in Energy and Environmental Science a team of researchers have investigated the nature of this failure in an effort to improve safety and reliability of Li-ion batteries.

The team of researchers, led by UCL used a NASA and National Renewable Energy Laboratory-developed device to induce short circuits in Li-ion batteries at a specific and pre-determined time and location. As battery failure takes place in millisecond time frames they used high speed X-ray imaging at Diamond Light Source and the European Synchrotron Radiation Facility to track how failure propagates through Li-ion batteries.

Their work has enabled them to look inside the ‘black box’ of commercial Li-ion batteries and determine why failure happens. They now plan to investigate different safety devices to determine which work best. Ultimately they hope their work will help to develop new safety devices and materials for batteries in the future.

Battery issues
Today Li-ion batteries are found in a wide array of devices including mobile phones, electric vehicles, satellite systems and medical devices. However with increasing use comes the need for better understanding of how these batteries degrade and fail, as they are called on to operate in more and more demanding situations.

One method of failure in Li-ion batteries is known as thermal runaway – when a sequence of exothermic reactions takes place within a cell, leading to overheating and potentially resulting in an explosion. As such, researchers would like to develop a better understanding of thermal runaway to prevent or control it in the future. However, as these failure events tend to take place on very short timescales, it has always been a challenge to observe them in real time.

Recently, researchers at NASA and the National Renewable Energy Laboratory in the US have developed an internal short circuit (ISC) device to provide a more scientific method to study this type of battery failure. The device can be used to initiate a short circuit at a specific location and time within a cell, triggering a thermal runaway event. The collaboration spans Diamond Light Source, University College London, University of Warwick and the European Synchrotron Radiation Facility, as well as NASA and National Renewable Energy Laboratory. The diversity of the facilities and expertise has enabled the researchers to apply their short circuit device to Li-ion batteries, in tandem with unique ultra high speed X-ray imaging in order to image the sequence of events that takes place from short circuit through to battery failure. 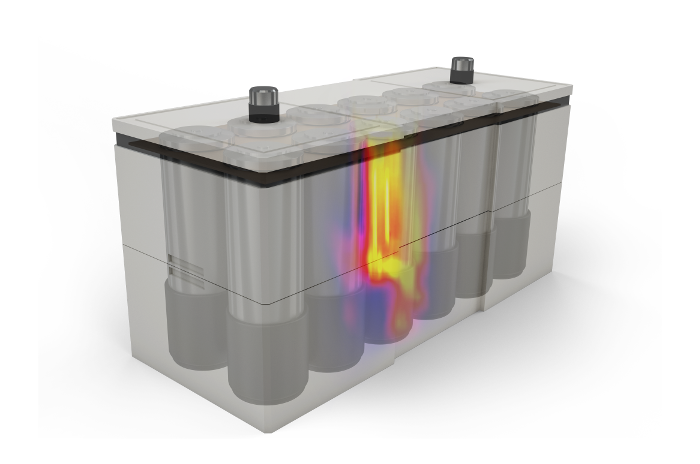 Synchrotron measurements
The researchers used the Joint Engineering, Environmental and Processing (JEEP) beamline (I12) at Diamond to image the failure events as they happened. The synchrotron facility was able to provide high flux X-rays to follow the event with both high spatial and temporal resolution. “It really is a case of blink and you miss it with failure events,” says Dr Paul Shearing the principle investigator based at UCL.  “We need fast imaging techniques that are only available at synchrotrons.”

I12 allowed the researchers to image the batteries up to 2000 frames/second using monochromatic light. In addition, while the cells under investigation were 18 mm in diameter and 65 mm high, the beamline offered the researchers a field of view in the tens of millimetres enabling them to image more than one cell at a time. This helped them investigate how failure could propagate from one cell to another, leading to large-scale failure in a battery pack. The measurements taken at Diamond were complemented by others carried out at the European Synchrotron Radiation Facility which were faster but had a smaller field of view.

Beamline help
The team say the beamline staff were instrumental in the research, with colleagues at Diamond not only providing the beamline and technique but also helping to run experiments and design experiments. They were also available to help with any health and safety concerns, an essential requirement for an experiment that involved blowing up batteries. For example, while short circuits were initiated inside the batteries at ~60 °C, during failure processes cell temperatures reached up to 1085 °C and beyond.

The combination of high speed X-ray imaging and the internal short circuit device has given the team the ability to see exactly how short-circuit failure propagates in cells. “We can see the specific location of failure and how it is spread because we can see inside. We can identify how materials change and how safety devices react for the first time,” says Dr Shearing.

To find out more about the I12 - JEEP beamline, or to discuss potential applications, please contact Principal Beamline Scientist Dr Michael Drakopoulos: michael.drakopoulos@diamond.ac.uk