The Achilles heel of Mycobacterium Tuberculosis

The role of the mycobacterial Ligase C complex

The mechanistic details of a mysterious mycobacterial DNA repair apparatus that had long eluded the scientific community have been revealed with the aid of the Macromolecular Crystallography beamline (I02) at Diamond Light Source. As recently reported in Nature Communciations, the prokaryotic Ligase C (LigC) complex was found to be involved in base excision repair pathways that fix damaged DNA.

In 2016, 1.7 million people died from tuberculosis, a notoriously difficult disease to treat, which is caused by Mycobacterium tuberculosis. These mycobacteria can lie dormant in the human body for decades, and in fact a quarter of the world’s population is believed to carry this latent form of the disease. Tackling this elusive mycobacterium is a global health goal and this might be partially assisted by targeting the machinery involved in protecting its genome from DNA damage to eliminate these pathogens.

A collaboration between the University of Sussex and the Polish Academy of Sciences set out to explore the fundamental components of the DNA repair machinery of Mycobacterium tuberculosis. The group focused their efforts on an ambiguous DNA repair enzyme called LigC and its polymerase component (Prim-PolC) to understand their cellular roles.

Using macromolecular X-ray crystallography at the I02 beamline, along with a series of in vitro and in vivo experiments, the team were able to characterise LigC and its binding partners. They discovered that LigC acts as a key coordinator of DNA excision repair in mycobacteria. Importantly, the scientists were able to knock out LigC and Prim-PolC and observed that these mycobacterial strains were more sensitive to DNA damage, which suggests that targeting such repair pathways could be an exciting new avenue for future antibiotic development. 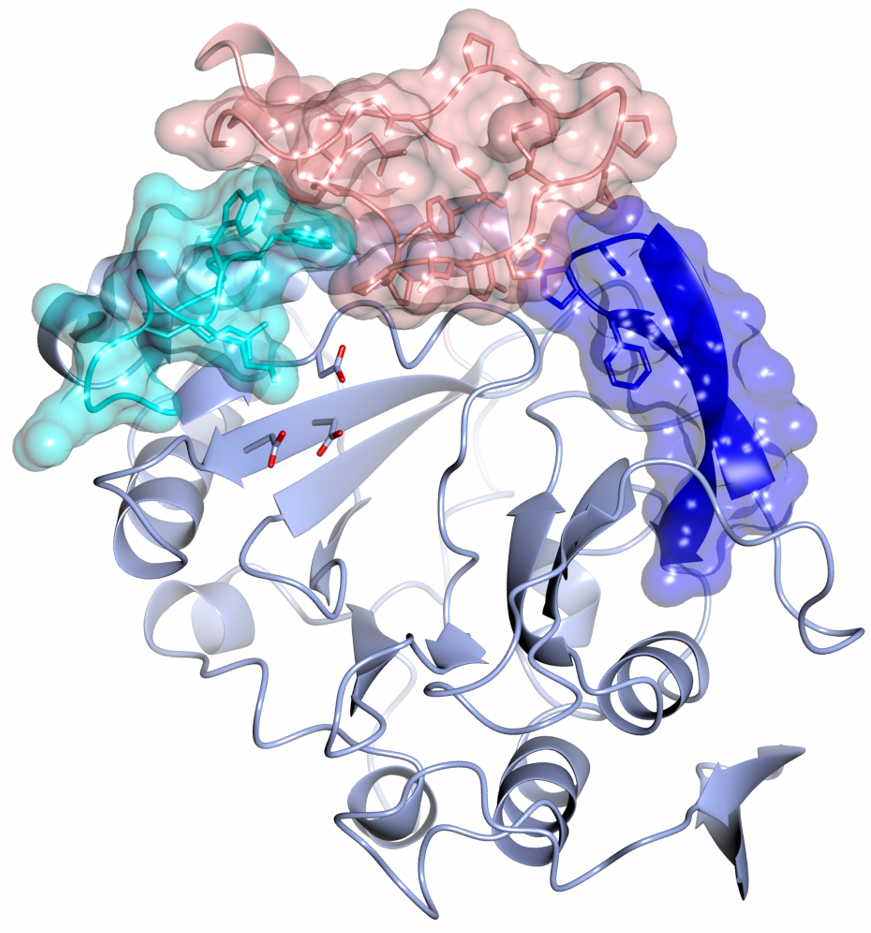 Guardians of the pathogen’s genome
DNA repair pathways in humans are important because they protect us from diseases, such as cancer, but they are also equally important in bacteria as they prolong survival and promote antibiotic resistance. Some mycobacteria, such as those that cause tuberculosis, can hide within cells and lay dormant for years, employing their complex and varied armoury of DNA repair machinery to protect their genomes during these long time spans.

Figure 1: A ribbon representation of the recently solved crystal structure of Prim-PolC, a DNA polymerase involved in base excision repair (BER) in the human pathogen Mycobacteria tuberculosis. The structure reveals how a conserved insertion in the protein structure (pink, termed Loop 3),  wedged between the blue (Loop 1) and cyan (Loop2) elements, likely enables the enzyme to preferentially bind to and fill in short gaps in the bacterial DNA thus facilitating their repair.

A team led by Professor Aidan Doherty from the Genome Damage and Stability Centre at the University of Sussex have a long history in characterising DNA repair machinery in mycobacteria. They initially worked with a DNA ligase called LigD that repairs DNA breaks and were intrigued by the related protein known as LigC and its associated polymerase component known as Prim-PolC. Although not proven, it was believed that the LigC complex acted as a ‘back-up’ for LigD to ensure efficient DNA break repair. To fully understand the role of LigC and Prim-PolC, the team embarked on a long-term project to characterise these enzymes and the proteins they interact with.

Professor Doherty explained their motivation: “Mycobacterium tuberculosis is a very difficult organism to treat in the clinic. Currently, we don’t know enough about their survival mechanisms, including how they protect their genomes. By understanding these mechanisms at the molecular and cellular level, we can block these key survival pathways with new antibiotics to target their ‘Achilles heel’. By elucidating the three-dimensional structures of their DNA repair machinery, we can then start to design novel inhibitory drugs that can block these pathways and potentially kill these bacteria in the process.”

Extra structural element aids in DNA repair
Initially, LigC and Prim-PolC were tagged and ‘pulled-down’ from mycobacterial cell extracts to find which partner proteins they bound to. They identified interactions with DNA excision repair proteins that are known to remove damaged bases from DNA and replace them with new ones.  The team then expressed all of these proteins in vitro and tested their action on damaged DNA. Amazingly, they saw that they could reproduce the activity of this DNA repair process in the test tube.

Next, the crystal structure of Prim-PolC was solved at the Macromolecular Crystallography beamline (I02) at Diamond. They noticed that the protein had an extra structural loop on its surface, not present in its closely related counterpart on LigD, which they believe helps this enzyme to fill in short DNA gaps produced during base excision repair and prevents it from conducting break repair. “When we saw the extra element, it completely changed the way we thought about Prim-PolC – it gave us remarkable insights into its DNA repair mechanism,” clarified Professor Doherty. The team also knocked out the Prim-PolC gene in mycobacteria and saw that the cells were more sensitive to DNA damage.

New strategies to treat TB
The team managed to overturn a previous hypothesis that LigC acted as a backup for LigD. Instead they determined that Lig C acts as hub to bring together a team of repair proteins to carry out base excision repair in mycobacteria.

The next steps for the team are to look at LigC and Prim-PolC in action at Diamond. They intend to reconstitute this pathway and trap enzyme complexes binding to and repairing DNA gaps. They also want to study how LigC and LigD cooperate together to repair different types of damaged bases.

“We believe these machines are important for maintaining cell survival in dormant stages of the cell cycle, which could be targeted in carriers of latent forms of this disease. Finding processes that maintain longevity in microorganisms is a different way of treating such conditions and this strategy could potentially be used to eliminate pathogens from patients with latent forms of this disease,” concluded Professor Doherty.

The I02 beamline has since closed and been replaced by the fully-automated VMXi beamline, which will welcome users later this year. To find out more about the original I02 beamline or the VMXi beamline, please contact Principal Beamline Scientist Prof Thomas Sorensen: thomas.sorensen@diamond.ac.uk