The structure and agonism of an insulin stimulator

The crystal structure of a crucial regulator of glucose metabolism has been revealed for the first time at Diamond Light Source. The momentous discovery, recently published in Nature, could allow a new generation of diabetes drugs to be designed.

Type 2 diabetes is a global health concern, and is characterised by an inability to sense and respond to rising levels of glucose. Glucagon-like peptide 1 (GLP-1) is an important hormone that is critical to the metabolism of glucose. This hormone is released from the gastrointestinal tract in response to food and it promotes the secretion of insulin from the pancreas. Stimulation of the GLP-1 receptor is a means of treating type 2 diabetes, but although there are several GLP-1 agonists approved for the treatment of type 2 diabetes, they are expensive and administered by injection only. Alternatives, such as small molecules or smaller peptides that can be taken orally are much needed. 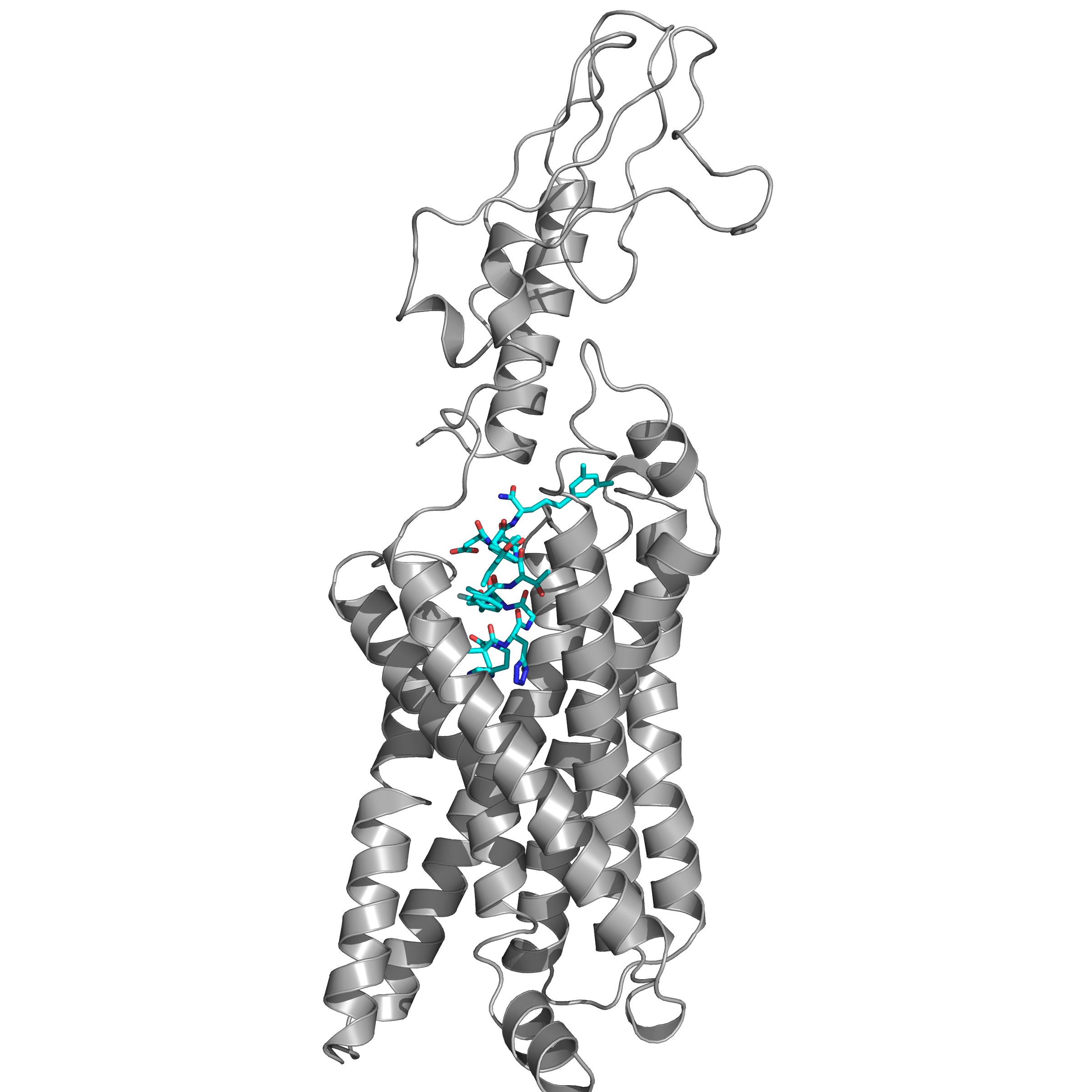 Scientists at Heptares Therapeutics approached the problem with the aid of the Microfocus Macromolecular crystallography beamline (I24) at Diamond to determine the structure of the full-length GLP-1 receptor bound with a truncated peptide agonist. This is the first X-ray structure of a full-length class B receptor in complex with a peptide agonist, which elucidates the detailed binding site of the peptide and gives an important insight into mechanism of GLP-1 receptor activation. With this knowledge, they designed a series of peptide agonists that demonstrated impressive efficacy in a mouse model of diabetes. This exciting approach could be just the beginning of a new era of diabetic treatments.

Figure 1: Structure of human GLP-1 receptor in complex with an agonist peptide

Glucose control
Type 2 diabetes is a condition associated with poor glucose control. People with type 2 diabetes do not respond adequately to a hormone known as GLP-1 which stimulates the release of insulin from the pancreas in response to food. GLP-1 stimulation is a well established treatment strategy to manage type 2 diabetes, yet the licensed drugs are long peptides and need to be injected. An oral drug in this setting would be revolutionary.

Dr Ali Jazayeri, Chief Technology Officer at Heptares Therapeutics and first author of the paper, described the aims of the study: “There is an interest from the pharmaceutical industry to generate shorter peptides or convert the peptides into small molecules that can be taken as a pill, so understanding the mechanism of peptide binding to the GLP-1 receptor and understanding the way in which the peptide can result in receptor activation is really important for generating new therapeutics.”
Truncated peptide agonist

A thermostabilised GLP-1 receptor was initially made by substituting 11 amino acids, which increased its stability to facilitate expression and purification. The receptor was crystallised in conjunction with a truncated peptide agonist, which was just a third of the size of the native GLP-1. Heptares Therapeutics designed the peptide agonist to have high affinity for the receptor, and it successfully stabilised the receptor in an active conformation.
I24 was used to solve the full-length structure of the GLP-1 receptor bound to the agonist. Dr Jitka Waterman, Industrial Liaison Scientist, stated: “It is relatively easy to get the structure of extracellular domains of receptors, but visualising a whole membrane receptor is challenging. The membrane protein crystals are usually small and fragile, and degrade quickly in an X-ray beam. The fast grid scans at the microfocus beamline allow you to quickly identify crystals, and the beam can be matched to the size of the crystals to reduce the background noise so you can collect high-quality data.”
Structure-based drug design
The full length structure of GLP-1 receptor bound to an agonist peptide was successfully determined. “We now understand in atomic resolution how the peptides interact in the vast network of residues on the receptor, and we understand in detail how the peptide interaction can activate the receptor”, stated Dr Jazayeri.
The structure revealed which residues were critical for conferring high affinity binding, so the study was able to validate previously published mutagenesis data. Furthermore, the study also revealed why it had been so difficult to design agonists against the receptor; the binding site was open and exposed so small molecules might not have been able to adequately bind. In fact, the knowledge gained from the structure was used to design a small series of peptide agonists at Heptares, and their activity was demonstrated in vivo in mouse models.
Dr Jazayeri concluded: “Not only does this structure give us a better chance of applying structure-based drug design to target GLP-1, but we also now have a template to make homology models to study related receptors that are implicated in a wide range of diseases.”
To find out more about the I24 beamline, or to discuss potential applications, please contact Principal Beamline Scientist Dr Robin Owen: robin.owen@diamond.ac.uk