Understanding the relationship between molecular structure and magnetic properties is a prerequisite for designing molecules and materials with a given magnetic behaviour. Thus paving the way for further miniaturisation of existing components for applications ranging from information storage to biomedical imaging. A team of researchers has now investigated the effect of increasing hydrostatic pressure on mononuclear rhenium(IV) (Re(IV)) compounds that exhibit long-range magnetic order (LRMO). Their experiments included high-pressure X-ray crystallography on the Small-Molecule Single-Crystal Diffraction beamline (I19) at Diamond Light Source. Their findings, published in Nature Communications, indicate that applying pressure to single crystals shortens the distances between molecules within the crystal, with changes to the magnitude of the intermolecular magnetic exchange interactions and an observable increase in the temperature at which magnetic ordering is achieved (also known as the ordering temperature). Considering pressure still appears to be a largely disregarded parameter in studies of molecular chemistry, as opposed to well-established high-temperature- and high-magnetic-field-based methods, the aim of this research is also to show that techniques such as high-pressure X-ray diffraction and high-pressure magnetometry can provide relevant information on the link between structure and magnetic behaviour in molecule-based materials.
Tweet 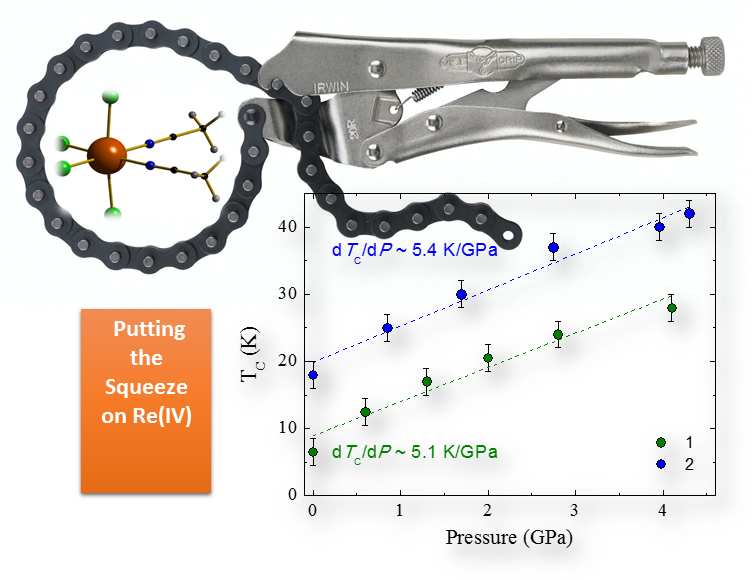 Materials characterised by LRMO are of fundamental importance to many modern technologies for which size reduction is a prominent goal of academic and industrial research. In this context, the possibility of designing molecules that behave in the same way as bulk magnets would represent a major step towards device miniaturisation. This capability requires a thorough understanding of the connection between molecular structure, magnetic anisotropy of the molecule and observable physical properties. A collaboration between three British universities (the University of Edinburgh, the University of Glasgow and Newcastle University) and the University of Valencia in Spain has now investigated the relationship between changing molecular structure and modifications to the magnetic behaviour in mononuclear compounds of Re(IV) under increasing hydrostatic pressure. Professor Euan Brechin, at University of Edinburgh and co-author of the paper, explained: “Mononuclear compounds of Re(IV) are unusual species because they display LRMO despite being mononuclear. This is due to the presence of important intermolecular interactions. Since the strength of these interactions is determined by intermolecular distances, we predicted that squeezing the molecules closer together would increase the magnitude of the interaction and thus the temperature at which LRMO is observed.”

Diffraction and magnetic studies
The researchers used high-pressure single-crystal X-ray crystallography to study structural changes in the considered Re(IV) compounds. High-precision measurements, needed to monitor small variations in structure, were carried out on beamline I19 at Diamond. To collect single-crystal diffraction data for increasing values of pressure, the Re(IV) compounds were placed in a diamond anvil cell illuminated by intense short-wavelength synchrotron radiation. “Innovations over the last few years on alignment of the pressure cells and processing of the high-pressure data have turned I19 into one of the best places in the world for collecting high-pressure single-crystal diffraction data on small molecules,” stated Prof Brechin. The crystallographic measurements indicated a contraction of the structure of the compounds as a result of increasing applied pressure, with observed changes in the intermolecular distances but no significant variation of the intramolecular bond lengths. Further, high-pressure magnetometry allowed the team to determine the effect of such pressure-induced structural modifications on the magnetic properties of the Re(IV) complexes. The magnetic study showed a rise in the ordering temperature with increasing values of pressure: the rates at which the ordering temperature became higher with pressure were found to be in agreement with the contraction of intermolecular distances revealed by the diffraction data.
Future research directions in high-pressure chemistry
In addition to the experimental investigations, the team performed theoretical calculations that highlighted a correlation between the magnitude of the intermolecular magnetic exchange interactions and the magnetic ordering temperature: both quantities increase linearly with pressure. Prof Brechin commented on the significance of this outcome: “Pressure is a valuable but hugely under-employed technique for probing magneto-structural relationships. The demonstration that pressure can be used to tune the molecular geometry and hence the physical properties of a material opens the way to many possible experiments.”
Prof Brechin and his collaborators will next turn to single-ion magnets, which are single mononuclear species with properties very similar to bulk magnets, to observe changes in geometry within a single molecule with pressure and tune the magnetic anisotropy at the basis of the magnetic behaviour. “The study published in Nature Communications taught us about the changes in intermolecular interactions under high pressure, so the next step is to look at systems where we can change the intramolecular bond lengths and angles.”.

To find out more about the I19 beamline, or to discuss potential applications, please contact Principal Beamline Scientist Dr Dave Allan: dave.allan@diamond.ac.uk.