How changes on the nano- and microscale affect catalytic performance

Fischer-Tropsch synthesis is a well-known process used to convert hydrogen and carbon monoxide to hydrocarbons. The process can be used to produce short, long hydrocarbon chains or heavy waxes, and so catalysts are important to promote certain products or increase the activity of the reaction process.

Although chemists know that certain Fischer-Tropsch catalysts behave in particular ways, to date the specific structural features that cause this have been largely unknown. However in a paper recently published in Science Advances researchers at Diamond Light Source, University College London, and other collabortaors from the UK Catalysis Hub, have shone light on this. They used a combination of different X-ray techniques concurrently to infer how cobalt catalysts changed at both the micro- and nanoscale throughout the Fischer-Tropsch process. Their novel technique allowed them to obtain spatial insight of the catalysts’ evolution throughout the reaction process in conditions approaching those used in industry.

The team’s results showed that even for catalysts with identical atomic make up, different nano- and microstructures are exhibited due to very small modifications in how the catalyst was synthesised. This in turn causes differences in the selectivity and activity of the catalyst. They hope this work can serve as a case study for how to determine the structural make up of catalysts under real operating conditions, and that their technique can be extended to investigate other catalytic systems.

Figure 1: Cobalt particle size distribution over two catalyst formulations.
Improving hydrocarbon production
The Fischer-Tropsch process is a well-known way to make hydrocarbons of differing lengths. Starting with just hydrogen and carbon monoxide, the series of reactions can produce hydrocarbon chains with very high purity, i.e. sulphur-free.
A number of catalysts have been developed to improve the selectivity and activity of the process, the most common containing cobalt (Co), iron or ruthenium. Empirically the activity of these catalysts is well known, with some being preferable to others due to higher selectivity for longer hydrocarbons, or ability to demonstrate high activity. However the fundamental mechanism behind the operation of these catalysts is less understood, and attempts to link structure to performance have mainly focused on analysing the catalyst before and after the reaction process, rather than throughout.
A flexible beamline
A group of researchers from Diamond Light Source and University College London turned to the Microfocus Spectroscopy beamline (I18) to help discover these answers. I18 offered the research team an array of different X-ray techniques to analyse the structure of their catalysts at both the nano- and microscale. The team set out to investigate the structural evolution of two industrial silica (SiO2) supported Co catalysts, modified with titanium (Ti), which differed only in the order by which they were synthesised. By setting up a micro reactor and using three detectors they were able to simultaneously collect data by three different techniques – X-ray Fluorescence, X-ray Diffraction and X-ray Absorption.
X-ray Fluorescence gave the team information about the elements that were present in their sample while X-ray Diffraction told them about the crystalline phases present. X-ray Absorption provided density information and helped to correlate the data collected by the other two techniques, leading to an improved overall measurement. By scanning and rotating their sample the team were able to view ‘slices’ through their reactor with a resolution of 5 micrometres. Each slice was collected once the reaction had reached equilibrium, and took a total of 100 minutes. 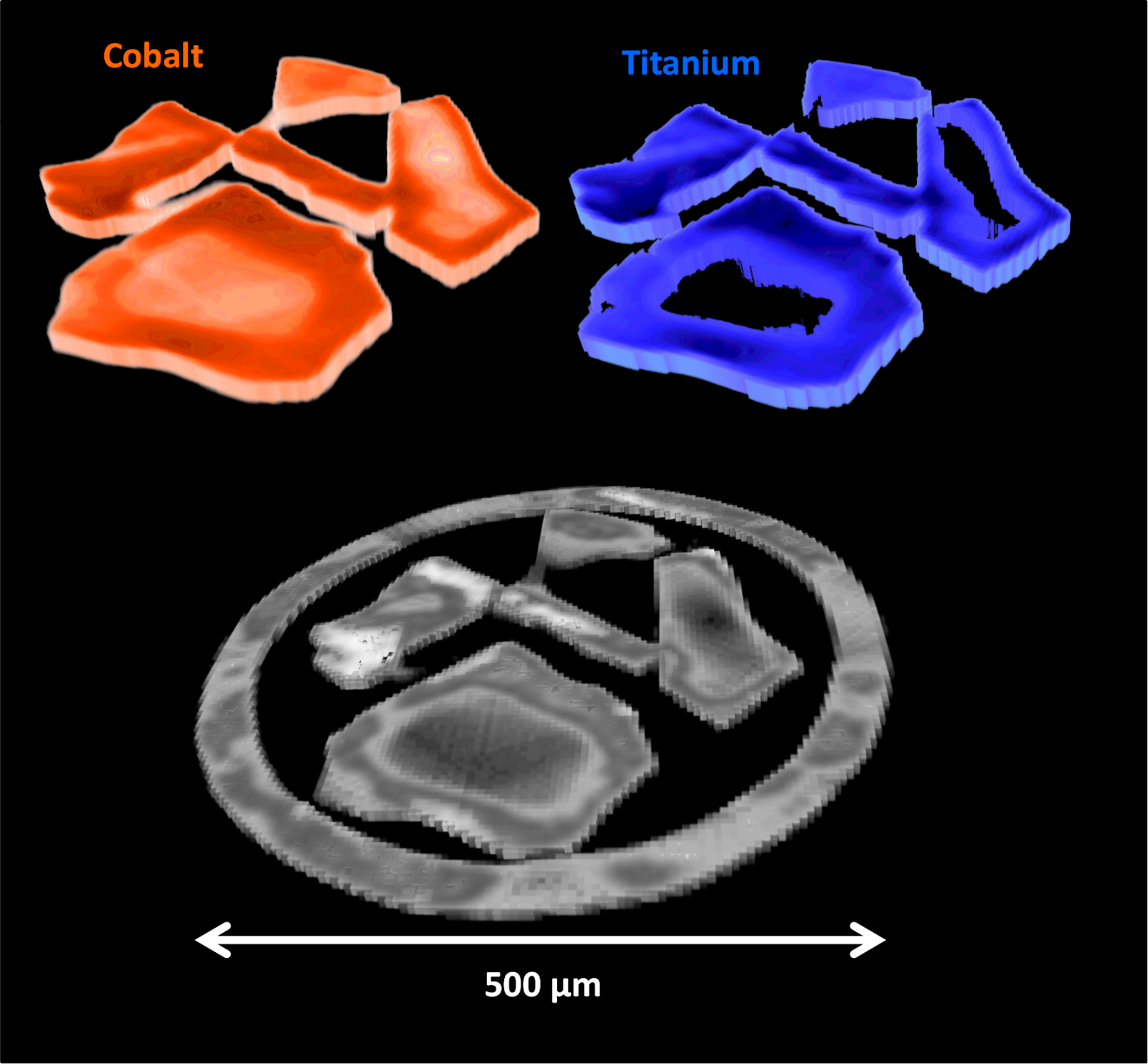 Figure 2: X-ray Absorption-CT cross section of micro-reactor (grey) with cobalt (red) and titanium (blue) distributions from X-Ray Fluorescence-CT.
Catalyst structure
The measurements gathered at Diamond showed that the nature and crystallinity of the catalyst support modification– in this case TiO2 – affected the ordering of the Co catalyst. “Our measurements showed that Co was a mixture of cubic close packed nanoparticles and a more disordered intergrown Co phase,” said Dr Steve Price, a post-doctoral researcher at Diamond who was part of the research team. When there was more crystallineTiO2 present – a case that occurred when it was added first in the synthetic process – Co was present in smaller, more disordered crystallites and exhibited higher catalytic activity. However when Ti was added later it did not crystallise and the Co nanoparticles tended to aggregate and form larger more ordered structures, leading to lower activity but a more highly selective catalyst that produced longer hydrocarbon chains. The research showed that very small modifications in how catalysts are made can significantly affect performance.
“Our study shows that spatially resolved measurements under operating conditions give more information than one single point, averaged measurement” said Dr Price, a post-doctoral researcher working at the I18 beamline. “We now have the tools to look inside your chemical reaction and correlate structure at both the micro and nanoscale with the observed performance.” Looking beyond the Fischer-Tropsch process, in principle any catalytic system could be investigated via this system to determine how the catalyst is behaving on a fundamental level. Ideally the team hope that this new technique can increase our knowledge of how catalysts work and ultimately help chemists rationally design catalysts for different functions.

To find out more about the I18 beamline, or to discuss potential applications, please contact Principal Beamline Scientist Prof Fred Mosselmans: fred.mosselmans@diamond.ac.uk