Iron oxide nanomaterials have been shown to be good catalysts for photoelectrochemical splitting – the process of splitting water into hydrogen and oxygen with light. However synthesising the right type of nanostructure is not straightforward, often requiring expensive equipment or toxic reagents.

In work recently published in Journal of Materials Chemistry A scientists have reported a greatly simplified method to make iron oxide nanostructures in solution. By using a deep eutectic solvent (DES) they created a synthetic process that is simple, fast, efficient and non-toxic.

The team found that by altering the dilution of the solvent and temperature of reaction they were able to control the reaction to create different types of iron oxide nanostructure. They used measurements taken at the Small Angle Scattering and Diffraction beamline (I22) at Diamond Light Source, in conjunction with others taken offsite, to study the solvent used in the reaction. This enabled them to determine that it was not significantly altered by the synthetic process. 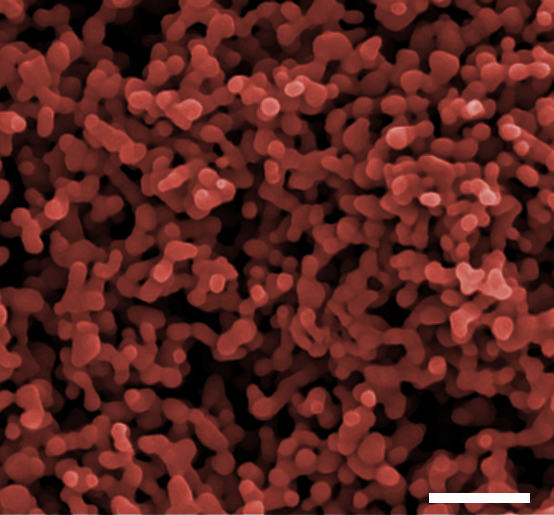 Figure 1: A false colour FE-SEM image of one of the photoanodes made from the nanoparticles, showing the porosity and nanostructure.


Green hydrogen production
Scientists have spent decades trying to achieve efficient photoelectrochemical splitting, as being able to produce hydrogen cleanly could open the way for a greener fuel future. One promising route is to use iron oxide nanoparticles as catalysts for water splitting. However scientists have found that creating nanostructures that demonstrate good catalytic performance can be complicated, often needing expensive equipment, high temperatures and toxic, alkaline chemicals if water is used as the solvent.

A research group at the University of Bath have found that using a Deep Eutectic Solvent (DES) can circumnavigate most of these issues. DES’s are created by mixing two solids – a salt and a neutral species – together. In this case the group used choline chloride as the salt, alongside urea as the accompanying molecule. Thanks to the chaotic interactions between the two solids, when they are mixed in the correct ratio they are unable to form crystals, lowering the melting point and forming a liquid.

DES’s are seen as a new generation of solvents similar to ionic liquids, and have been shown to promote more sustainable ways of synthesising substances such as nanomaterials where structure is of vital importance. Indeed the team found that synthesising iron oxide nanostructures in their chosen DES was far more straightforward than existing processes. They simply mixed the reagents in the solvent, before heating via a microwave for around 30 seconds.

Characterising nanostructure
The team used the Small Angle Scattering and Diffraction beamline (I22) at Diamond to investigate if the reagent was changed after the synthesis had taken place, as during the reaction cycle the urea in the DES breaks down in order to make iron oxide. As the solvent structure was smaller than the size of the iron oxide nanoparticles, they used the beamline’s wide angle scattering detector, which could give information on both the nanoparticles and solvent in a single shot. The instrument at I22 allowed the team to determine the solvent structure quickly, taking only 15 seconds to measure each sample.

“We could only see a smaller change in solvent scattering before and after [the reaction process],” says Professor Karen Edler, from the University of Bath and the study’s Principle Investigator. “Some urea is breaking down, but not much,” she adds, indicating that the DES can potentially be recycled to create an even greener reaction process.

Controlling the reaction
Nanoparticle shape is important to determine catalytic behaviour, and the team found that by altering both the reaction temperature and dilution of the DES they could make different iron oxide nanostructures. While the nanoparticles created in the undiluted DES formed nanoparticles with good catalytic ability they discovered that the best activity was given by those nanoparticles formed in a hydrated DES at 150°C.

“If we use these new solvents we can do the reaction with a lower energy input and get good materials for photoelectrochemical splitting,” says Professor Edler. The team is now hoping to create nanoporous iron oxide structures which can be used to form photoanodes even more easily than the iron oxide nanoparticles.

To find out more about the I22 beamline, or to discuss potential applications, please contact Principal Beamline Scientist Dr Nick Terrill: nick.terrill@diamond.ac.uk