Uncovering the structure of biological molecules

Bonds between hydrogen atoms are ubiquitous in nature, and understanding the hydrogen bond is fundamental for the life sciences. However, determining the electron charge in hydrogen bonds is tricky, and the problem is made worse by X-ray radiation damage to organic samples, which can change the confirmation of proteins and reduce the resolution of electron density maps. A Brazilian research team has now demonstrated that it is possible to use asymmetries in second order X-ray diffractions to extract information about hydrogen electron charges in complex biological molecules. In a paper recently published in the Journal of Applied Crystallography, the team used the flexibility afforded by the Materials and Magnetism beamline (I16) at Diamond Light Source to show that this method can measure the electronic charge distribution in D-alanine (a common amino acid used in the biosynthesis of proteins). Besides uncovering detailed structures for biological molecules, this method can potentially also be used to probe radiation damage effects at atomic scales. 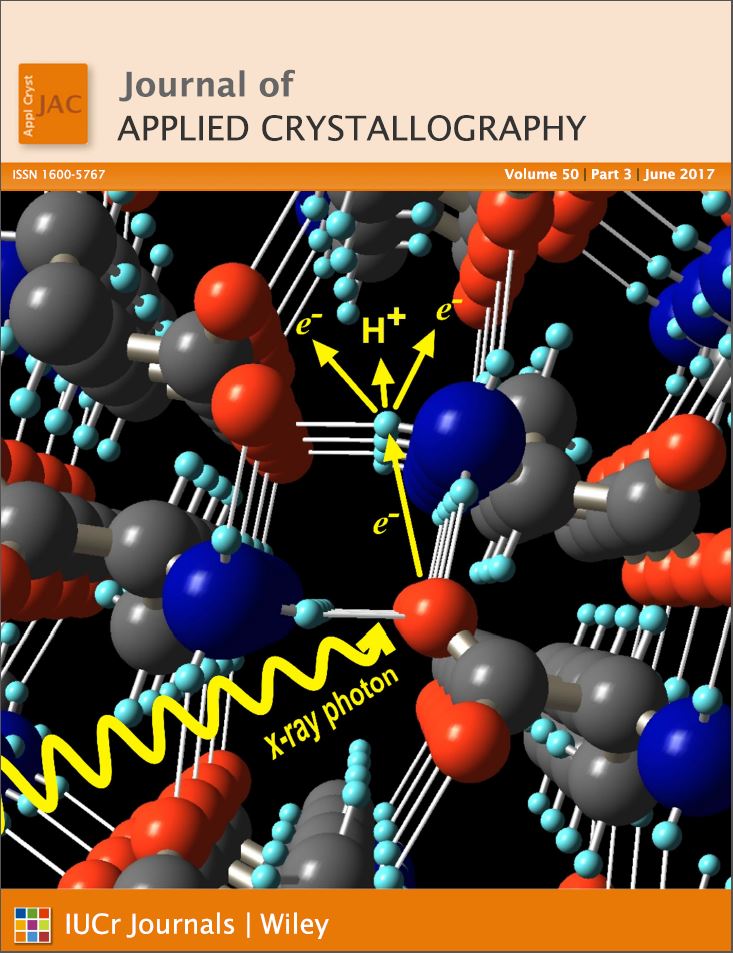 A difficult problem
The hydrogen bond is perhaps the most important directional interaction between molecules, and it is crucial in deciding the final confirmation of complex biological proteins. But the detection of H atoms is still a major problem for X-ray crystallography, because H atoms only contribute weakly to diffraction data.

To overcome this problem, nuclear methods such as neutron diffraction have been used, as they are sensitive to the position of protons – combined with X-ray methods, they have been able to pinpoint the key H atoms in large molecules. Nevertheless determining the electron charge in hydrogen bonds remains a difficult problem, demanding detailed charge density maps with sub-Ångström resolution.

Another problem facing life-scientists interested in uncovering the structure of complex biological molecules is that the X-rays used in scattering experiments can themselves cause radiation damage to biomolecules. This means that the structures which are decoded from X-ray crystallography may not actually reflect the true structure of the undamaged protein.

A new spin on an old method
A team headed by Professor Sérgio L. Morelhāo from the University of Sao Paulo in Brazil approached this problem by reconsidering a method dating back to the invention of X-ray crystallography in 1937, when it was first recognised that second order diffractions could yield structural information about molecules. The intensity profiles of second-order diffractions often exhibit characteristic asymmetries, which is due to the dynamical coupling of simultaneously diffracted waves inside a single-crystal domain.

However, using this approach can be difficult: the experiments needed are time-consuming, and they require a high level of expertise in single-crystal diffraction. In addition, understanding the data requires a familiarity with dynamical theory, and in the end, the gains in structural resolution are limited.

Nevertheless, Prof Morelhāo’s team has previously proposed that the type of asymmetry in second order diffractions may be key: it could open up a ‘window of accuracy’ in phase measurements, and provide a new way of obtaining high resolution crystal structures.

Amino acid crystal structure
To demonstrate the feasibility of the approach, the team chose the challenge of detecting electron charges in hydrogen bonds responsible for the force between amino acid molecules. They used D-alanine as a test case.

“These experiments needed many more degrees of freedom than standard experiments,” explained Prof Morelhāo. “We needed a very flexible set-up, where we could spin the sample many different ways.”

Professor Steve Collins, Principal Beamline Scientist at the I16 beamline at Diamond, visited Brazil during the Synchrotron User Meeting 2014 as an invited speaker where he discussed with the team their requirements and confirmed that what they needed was feasible and could be done at Diamond.

The flexibility afforded by I16 was just what was required for these experiments, and the research team was successfully able to use the beamline to decode hydrogen bonds in the crystal structure of D-alanine.

Many applications
“Unlike old phase measurement methods based on dynamical diffraction simulations, our method is simple enough that anybody can use it”, said Prof Morelhāo. “There is no need for simulations, so the method is open to non-experts too.”

This means that there is a wide range of applications for the method described in the paper, including decoding the detailed structures of biological molecules. Perhaps one of the most important is that this method can be used to probe radiation damage in samples, shedding light on damage mechanisms at atomic levels and how the existing protein structures in the literature reflect the natural confirmation of proteins.

This way of X-ray dynamical diffraction could also be used to probe important biological questions, such as why all living things only use left-handed amino acids. “We are currently exploring if radiation damage might explain this potential asymmetry, as otherwise, left- and right-handed amino acids appear to have very similar properties,” said Prof Morelhāo.

To find out more about the I16 beamline, or to discuss potential applications, please contact Principal Beamline Scientist Prof Steve Collins on steve.collins@diamond.ac.uk