Transport cycle: As easy as ABC

Mechanistic insights from the structure of bacterial toxin exporters

In work recently published in EMBO Journal, Dr Konstantinos Beis and colleagues have determined the structure of the toxic peptide exporter McjD, a member of the ABC transporter family of protein complexes. McjD functions as part of a bacterial system that produces and releases toxic peptides (a short string of amino acids) to kill closely related bacteria to ensure nutrient availability and reduce competition.

The researchers were able to use these structural insights to propose a novel mechanism for toxic peptide exporters that ensures the exporter proteins are available, preventing build-up of toxic peptides inside the cell. 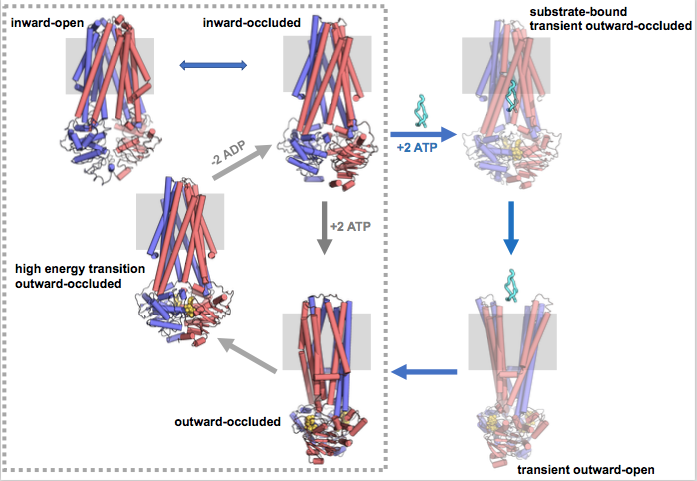 Structure-function relationship of proteins
One of the basic tenets of structural biology is that the function of a protein complex is defined by its structure. For example, the order of the string of amino acids makes up the primary structure, the local interactions make up the secondary structure and finally the arrangement of structural features and subunits produce the full three-dimensional, working machinery. In this research, the structure-function relationship of the ABC transporter, McjD, was probed using Macromolecular Crystallography (MX) at Diamond Light Source.

ABC transporters are responsible for importing nutrients into a cell and exporting drugs or toxins out of a cell. The structure and function of these transporters is conserved from bacteria to humans that span the cellular membrane, with an alternating opening inside or outside. A particle is recognised at one side or the other, taken up and transported across the membrane, and finally released on the opposite side. This process requires energy in the form of ATP binding and hydrolysis to ADP. Throughout each of these stages, the structure of the transporter changes. To determine the structure of two of these stages, the researchers withheld ATP to capture the transporter at the pre-transport stage and used a vanadate-modified molecule (ADP vanadate) to capture the transporter at the ATP-hydrolysis stage (see Figure 1).

Determining and confirming the structures
Crystals of both of these stages were grown and macromolecular crystallography was performed in order to determine the structures of the two stages. Diffraction data for the pre-transport stage was collected on MX beamline (I04-1) and for the ATP-hydrolysis stage on the Long Wavelength MX beamline (I23). Using I23 meant that data could be collected not only at the normal energy for diffraction experiments, but also at an energy that allowed only the vanadium-based molecule to be seen (see Figure 2). This ensured the presence of this molecule, further validating the resulting structure of the transporter, which was necessary for understanding the structure. I23 is ideally situated to help answer these questions because data collection at the wavelength needed to probe vanadium is performed in vacuum, decreasing the amount of X-rays being lost due to absorption and scattering. This is the first successful study on I23 using the capability to use longer wavelengths to locate lighter elements such as vanadium, by tuning the X-ray energy above and below the absorption edge.

To confirm these new structures were biologically relevant, multiple additional experiments were completed using both theoretical simulations and biochemical experiments. First, Dr Beis and colleagues verified that the structures could exist in a lipid environment similar to where they would normally be found in the cell. Next, simulations that used the new structures were used to model the entire process of transporting a molecule across the membrane to ensure it was possible and fit with previous data. And finally, these simulations were followed up with a biochemical test of a structure-specific mutant version of the transporter that was found to no longer function, validating the researcher’s understanding of the structure. 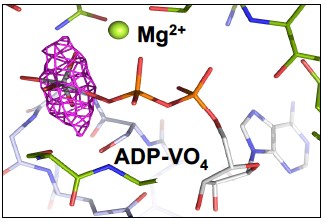 Figure 2: Anomalous difference electron density map (pink mesh) for the ADP-vanadate molecule from data collected at I23. The corresponding map verified the presence of vanadate upon interaction with ATP. The structure representes the ATP-hydrolysis stage.

Mechanistic insights to drug transport
Studying the structure of the antibacterial peptide exporter, McjD, provided mechanistic insights to the mechanism of toxic peptide export. Two new structures were identified in the transport cycle of McjD leading Dr Beis and colleagues to propose a new structural mechanism for the export of toxic peptides that requires only a short-lived opening of the transporter cavity for the release of the toxin. This is important because it ensures that the transporter is more readily available to export toxic peptides, preventing their build-up inside of the cell. This allows the cell to produce these toxic peptides without harming itself, and export them to other bacteria, thereby reducing competition. By studying these interactions, we can learn more about self-immunity, multi-drug resistance and new antibiotics.