Separating the spins at the surface

Researchers identify a route to create surface states with a maximal energy difference between electrons with different spins.

The surfaces of materials can host unique electronic properties, where the electrons behave very differently from the interior. In particular, the intrinsically broken symmetries of the surface compared with the bulk of the sample allows for a separation of energy states according to their spin. This effect could be utilised in novel electronic devices which operate with both the charge and spin of electrons- but it is first necessary to understand how to maximise the magnitude of the effect.

In a recent publication in Nature, researchers from the University of St Andrews and the Max Planck Institute for Chemical Physics of Solids in Dresden, in collaboration with beamline staff from Diamond Light Source and Elettra in Italy, described a new route to maximise the spin-splitting of surface states. By considering the hierarchies of energy scales in the system, they identified that a maximal spin-splitting situation could be realised by first having a very large energy scale associated with the inversion symmetry breaking at the surface. They then measured the electronic structure of a family of layered oxide materials and found a significant spin-splitting, proving that this scenario can indeed be realised. Their result gives a useful principle for the design of new materials with interesting and useful surfaces and interface states.

Broken symmetries at the surface
The different conditions found at the surface of a material can lead to quite different electronic behaviour, compared with the bulk of the sample. For example, it is possible for a completely insulating material to host a metallic surface state. One of the exciting possibilities which is allowed at the surface is the creation of electronic states which have different energies depending on their spin (the property of electrons which gives rise to magnetism) – opening a rich avenue for potential applications in the emerging field of spin-based electronics.

According to the well-known Rashba effect, the creation of these spin-split surface states requires two ingredients. The first is spin-orbit coupling, a quantum mechanical interaction associated with atomic physics, which mixes the spin with the orbital angular momentum. The second ingredient is that inversion symmetry must be broken. In most materials, inversion symmetry is present - i.e. the crystal structure looks the same if one simultaneously flips (inverts) everything along all of the x,y, and z axes. However, inversion symmetry is intrinsically broken at surfaces and interfaces, because the highly symmetric crystal structure is abruptly cut off in one direction. As a result, the Rashba effect can be studied in a large number of systems, but often the spin-splitting effect ends up being small. 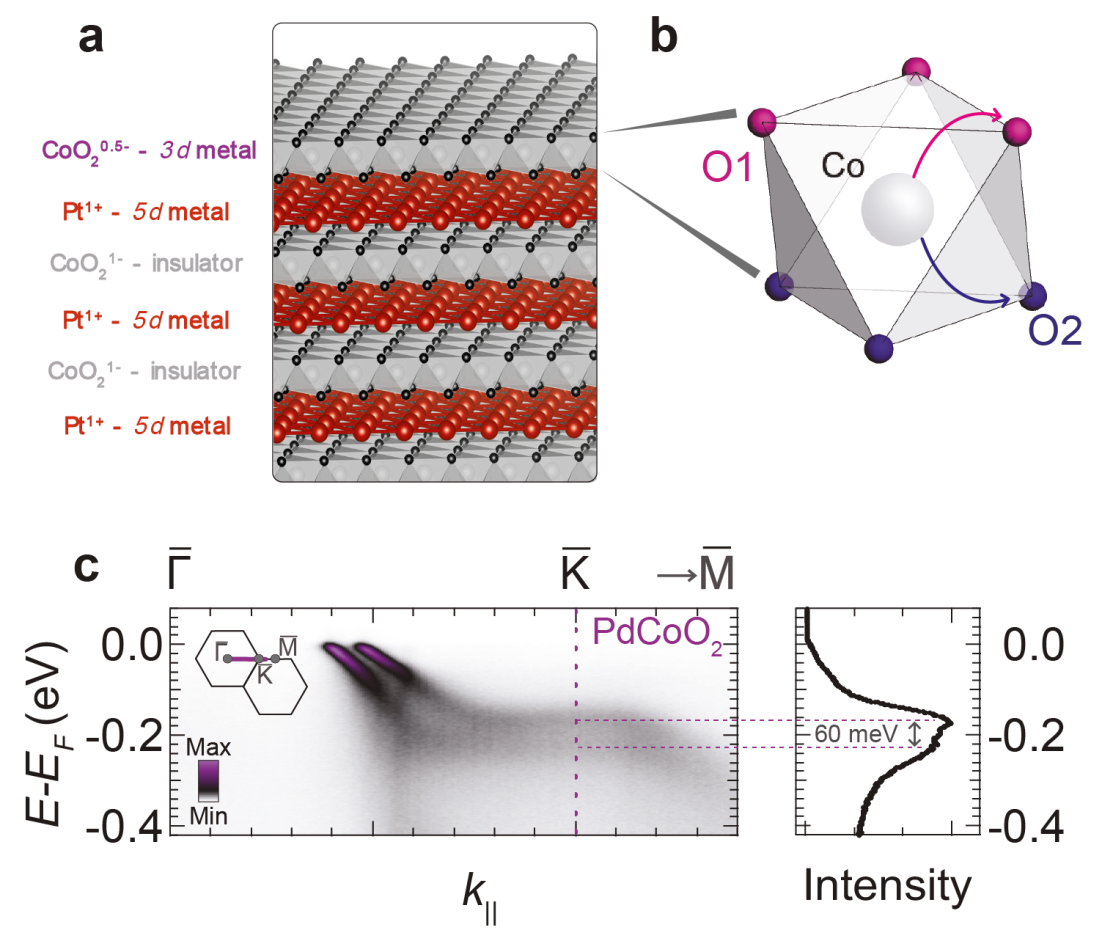 Figure 1. a) The structure of PtCoO2 – terminated at a Co-O layer. b) detail of the Co-O octahedron; on the top layer, the electron transfer via the top O1 atoms is strongly preferred to the O2 atoms. c) ARPES measurement of PdCoO2, showing a pair of bands with a spin-splitting of 60 meV.

Maximising the surface spin-splitting: a new route
For device applications, a maximal spin-splitting would be desirable. Since inversion symmetry is always broken at the surface, conventional wisdom would suggest that one should look to maximise the first ingredient, which is the spin-orbit interaction. According to textbook quantum mechanics, the magnitude of spin-orbit coupling should increase strongly with the atomic number. This has led to a focus on studying the surfaces of materials constituted by heavy elements (lead, bismuth, etc) - and there are indeed examples of relatively large spin-splittings in heavy-element materials. However, finding such systems is something of a random process, and the experimental magnitude of the spin-splittings found in these solids is typically much reduced compared with the ‘bare’ atomic spin-orbit interaction. This caused the researchers to consider whether there could be an alternative route to generate large spin-splittings.

In this publication, the researchers set out a new philosophy on the problem: a large spin-splitting can be achieved by first maximising the energy scale of the inversion symmetry breaking at the surface. When this is the dominant energy scale, one can then attain large spin-splittings, which correspond to nearly the full strength of the bare atomic spin-orbit coupling. As a result, spin-splittings, which are comparable to the largest known values, can be generated at the surfaces of unlikely materials, which do not have heavy elements. “It’s important to consider the energy hierarchies, and then to find a structure where there are naturally large energy scales associated with the inversion symmetry breaking at the surface,” said Veronika Sunko, lead author of the study.

Using I05 at Diamond to confirm the spin-splitting
The researchers proved that their idea works in a family of “delafossite” materials (Pd,Pt)(Co,Rh)O2, shown in Fig. 1a, which have a layered crystal structure. In the bulk, these materials are metals with excellent conduction properties due to the presence of 2D sheets of platinum. However, it was shown that this metallic layer has little effect on the spin-split surface states under consideration here. Instead, the relevant physics occurs at the surface layer of CoO2. These CoO2 layers are insulating in the bulk, but the topmost layer is metallic because it has to host a different number of electrons. As usual, inversion symmetry is broken at this surface and spin-orbit coupling is also present, but since neither Co nor O are particularly heavy elements, naively one would not expect to find a large spin-splitting.

In order to prove that a large spin-splitting can nevertheless exist at the surface of this system, the researchers came to the Angle-Resolved Photoemission Spectroscopy (ARPES) beamline (I05) at Diamond Light Source. This method allows researchers to establish the electronic structure of materials, and their surfaces, by studying the electrons, which are ejected out of the sample by a beam of photons, according to the photoelectric effect. The small beam spot and careful positional control on the sample available at I05 proved crucial for obtaining high-quality data from the small samples.  The data from I05 showed a large spin-splitting effect, reaching 60 meV in PdCoO2, shown in Fig. 1c, and as high as 150 meV in PdRhO2.

Theoretical modelling was able to shed some light on the origin of the large effect. In the top-most CoO2 layer, there is a large energy difference for the electronic pathways between Co sites via the oxygen atoms at the exposed surface (O1), compared with the alternative pathway through the lower oxygen atoms (O2), as shown in Fig. 1b. This is directly associated with inversion symmetry-breaking at the surface, since both pathways would be equivalent in the bulk by symmetry, and this sets the dominant energy scale. A secondary but still very significant spin-splitting is then allowed, in this case making full use of the atomic spin-orbit interaction to achieve one of the largest known spin-splitting effects.  Complementary measurements were also performed at Elettra in Italy, which were able to directly confirm the spin-polarisation of the surface states.

“We have identified a new and efficient route to generate a large energy scale of inversion symmetry breaking at surfaces, which enables some of the largest spin-splittings yet seen – without using heavy elements,” said Ms Sunko. The researchers now hope that the principles they have identified will lead to further development of surface and interface structures where the energy scales of inversion symmetry dominate and allow for large spin-splittings, with a hope that such a materials-by-design approach could lead to future devices, which utilise the fascinating spin properties of these surface states.

To find out more about the I05 beamline, or to discuss potential applications, please contact Senior Beamline Scientist Dr Timur Kim, timur.kim@diamond.ac.uk.

The work was supported by the European Research Council (via the QUESTDO project), the UK Engineering and Physical Sciences Research Council, the Royal Society, the Max-Planck Society, and the International Max-Planck Partnership for Measurement and Observation at the Quantum Limit.