Protein punch a blow for bacteria

For the first time ever, scientists have defined the structure of a fundamental part of our immune system, the membrane attack complex (MAC), with the aid of the state-of-the-art cryo-electron microscope (cryo-EM) facility at Diamond Light Source. The structure was recently unveiled in an article published by Nature Communications. 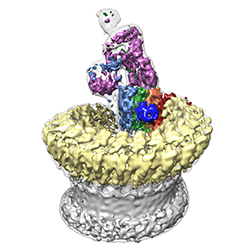 The MAC is a critical player in our response to infection. When pathogens are detected, a collection of signalling proteins known as ‘complement’ are activated and this process triggers the assembly of the MAC. The MAC is a huge pore made from a set of proteins that literally punches holes in the wall of bacteria to kill them. Although the lesions made by this fascinating protein complex were first noted in 1964, the actual structure of the MAC was unknown.
The mystery was solved at the electron Bio-Imaging Centre (eBIC) at Diamond over half a century later with the collaborative efforts of scientists from Imperial College and Cardiff University who determined that the MAC adopted a ‘split washer’ configuration. Their structural analyses also gave them an insight into how this unusual complex breaks through microbial membranes.
Unexpected finding
The biggest headaches for structural scientists are large, glycosylated transmembrane proteins. Unfortunately, this describes the MAC exactly, with it being a massive 1.8 MDa complex teeming with sugars. Lead investigator of the project and lecturer in structural biology at Imperial, Dr Doryen Bubeck explained the solution: “The MAC is a very large protein pore with lots of sugars and transmembrane regions. We used cryo-EM as it is much better than X-ray crystallography for large, flexible assemblies. Advances in this technique mean that we can now look at structures at a really high resolution to understand them at a molecular level.”
The MAC components were purified from human blood and the pore was assembled in the presence of lipids prior to being flash frozen. The data were collected over a 24h period at the eBIC and the structure was solved within two months. “We made an unexpected finding in that the pore had a split washer shape”, said Dr Bubeck. “Unlike closely related pore-forming proteins that form closed symmetric ring structures, the MAC is an asymmetric pore. The structure has showed us its likely mechanism of action: we think that the shape of the pore perturbs the biophysical properties of the membrane”, she explained.  The team hypothesised that a subsection of the pore partially inserted into the host membrane initially to prime it for the insertion of the bulk of the complex. 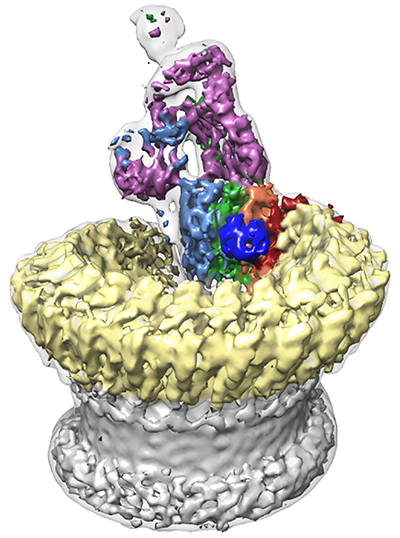 Sharpened map segmented and coloured according to complement proteins: C5b (magenta), C6 (light blue), C7 (green), C8a (red), C8b (orange), C8g (dark blue) and C9 (light yellow). CDC/MACPF β-barrel and detergent belt are in grey colour. Density is overlaid on the unsharpened map (transparent surface).
Anti-cancer role
The role of the MAC is not just limited to fighting bacteria; it also features in the fight against cancer. Some immunotherapies, such as rituximab, activate the complement pathway to kill cancer cells; however, certain types of leukaemic cells can overexpress a receptor, known as CD59, which protects them from the effects of complement and MAC. Dr Bubeck explained: “My work is funded by a Career Establishment Award from Cancer Research UK. By figuring out how MAC functions, it is hoped that we could make an adjuvant therapy to enhance the effects of rituximab.”
In order to realise this aim, the team intend to continue studying the structure of the MAC. “Although the resolution of the structure is sub-nanometre, it is still not at the level of detail where you can see the side chains and the amino acids responsible for the interactions. We need to collect more data at Diamond and apply newer computer algorithms to allow in silico purification of the sample and improve the resolution” stated Dr Bubeck. “We also want to find out how mutations in patients affect the assembly of the MAC and understand how CD59 regulates it.”
Alistair Siebert, eBIC’s Senior Electron Microscopy Scientist, said: “It is very exciting to see such an important discovery being made at the cryo-EM facility, and we are looking forward to supporting more research like this in the future. The experimental team were able to exploit the capabilities of the microscope to their full advantage, which allowed them to get the high-resolution results needed to solve the structure. With the first papers now being published with cryo-EM data, it is possible to see the impact the facility is already having on biological sciences.”
To find out more about using cryo-EM, or to discuss potential applications, please contact Senior EM Scientist Alistair Siebert: alistair.siebert@diamond.ac.uk.