More highlights from I18

Phytoremediation offers a cost-effective, plant-based approach to environmental clean-up, making use of the ability of some plants to remove toxic metals from soil. However, these metals are toxic to the plants, and stunt their growth, limiting the effectiveness of phytoremediation. Previous research has shown that inoculating seeds or soil with plant growth promoting bacteria (PGPB) improves the plant’s tolerance to metal toxicity, but exactly how this works is not yet understood. The effect is thought to be due to changes in the chemical form of accumulated zinc and the way it is distributed through plant tissues when PGPB are present. This research investigated the spatial distribution of zinc and PGPB in plant roots, to see whether the two are related. Using X-ray Absorption Near Edge Structure (XANES) on the Microfocus Spectroscopy beamline (I18) researchers examined cross-sections of Brassica juncea, a mustard species that is known to accumulate zinc, which had been preserved in dry ice. The results showed that plant growth was significantly improved in plants that had been inoculated with Rhizobium leguminosarum, a bacterium isolated from clover plants. The bacterium acted by concentrating zinc at the surface of the root, and by synthesising sulfurbearing compounds that strongly bind zinc to form a non-toxic compound inside plant tissues.

Although zinc (Zn) is a constituent of many enzymes and is thus an essential trace metal for optimum growth in plants1, it is also toxic to plants at elevated concentrations, with plants exhibiting stunted root growth and leaf chlorosis when concentrations exceed 100 mg kg-1 dry weight2. Such toxicity, including that of other heavy metals severely limits the use of plants to remediate metal contaminated environments. Inoculating seeds or soil with plant growth promoting bacteria (PGPB) confers Zn tolerance on some plants, leading to growth recovery, often despite increased zinc bioaccumulation by the plant. This PGPB trait has the potential to be exploited for cleaning up zinc contaminated land through phytoextraction3. Although previous studies have linked the observed tolerance to changes in Zn speciation in plant tissue, the mechanistic basis of such speciation changes is currently unknown. Even more obscure is the exact role that PGPB play in the speciation changes and hence the exact location where these changes occur. Addressing both questions could lead to strategic improvements in plant-PGPB combinations that can propel phytoextraction into a viable cheap technology. 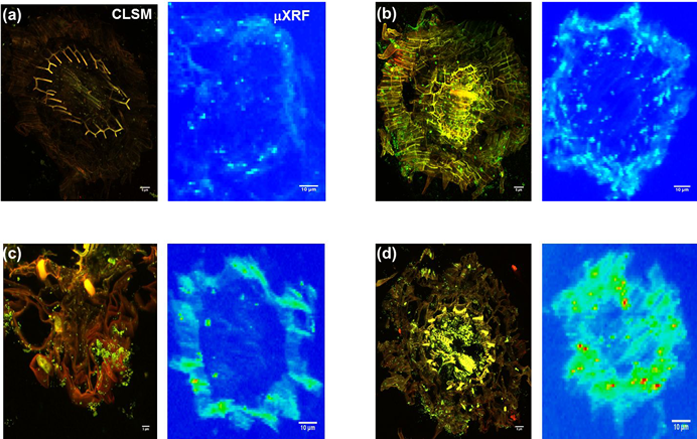 Figure 1: CLSM and Synchrotron-μXRF imaging of bacteria-Zn co-localisation in B. juncea root. a) Un-inoculated; b) Inoculated with P. brassicacearum; c) Inoculated with R. leguminosarum; d) Innoculated with both bacterial strains, at 14 days after seed planting in 400 mg kg-1 Zn. The figure shows that the PGPB significantly enhanced Zn sequestration and also establishes correlation between mode of bacteria colonisation and Zn compartmentalisation in roots. Scale bars: CLSM = 5 μm; μXRF = 10 μm.

Starting from the knowledge that most PGPB colonise the root epidermis (the external plant regions including the root rhizosphere, rhizosplane, and external cortex4, the authors hypothesised that the root epidermis forms the locus of both metal accumulation and speciation changes. They used a novel combination of Microfocus X-ray Fluorescence (μ-XRF) imaging for Zn mapping on I18 with Confocal Laser Scanning Fluorescence Microscopy (CLSM) for imaging bacterial cell and Zn distribution in plant roots. The latter is necessary as individual bacteria cells are hard to visualise using standard optical microscopy and allowed them to establish the spatial distribution of bacteria and Zn following Syto9 (bacteria) and Rhodzine-3 (Zn) staining. Imaging was performed on roots of seedlings grown for 14 days in Zn-contaminated media inoculated with an endophytic (Pseudomonas brassicacearum), rhizospheric (Rhizobium leguminosarum) or both bacteria.

Two contiguous cryo-fixed sections were cut and mounted on glass slides and kapton tape for imaging with CLSM and μ-XRF imaging respectively (Fig. 1a). CLSM established the absence of bacteria in non-inoculated roots (Fig. 1a) but that the endophytic Pseudomonas colonised both the rhizosphere and the endodermis (Fig. 1b), whereas the rhizobium localised in the rhizoplane (Fig. 1c), both consistent with expectations. μ-XRF mapping showed that that Zn distribution closely mirrored bacteria cell colonisation patterns (Fig. 1b, c and d), thus demonstrating for the first time the co-localisation of bacteria and metal hot spots, suggesting a clear role for bacteria in metal sequestration and compartmentalisation. XANES analysis showed statistically significant differences in the speciation of Zn between epidermis and endodermis, with non-inoculated roots showing significantly more of the toxic Zn sulfate in both epidermis and endodermis (Fig. 2). By contrast, inoculated roots had no Zn sulfate in the endodermis, showing a predominance of Zn cysteine instead, with more Zn cysteine in roots inoculated with rhizobium bacteria.

These new observations were fundamental in the development of the first mechanistic model for the transformation of the toxic Zn2+ ion (supplied as Zn2+ sulfate) into non-toxic Zn cysteine complex in the rhizosphere (Fig. 3). The model was predicated on the use of endogenous reserves of metal complexing ligands such oxalate, phytate and cysteine to complex Zn2+, the latter known to be synthesised via O-acetylserine by most plants as part of their sulfur metabolism5. All three ligands are capable of complexing zinc in proportions that depend on the concentration of the ligand and the relative stability constants of the complexes. However, since Rhizobium can also synthesise cysteine through sulfate metabolism, this additional cysteine synthesis increases the cysteine concentration and hence the proportion of cysteinebound zinc, explaining both the enhanced Zn accumulation and detoxification in roots inoculated with R. leguminosarum. 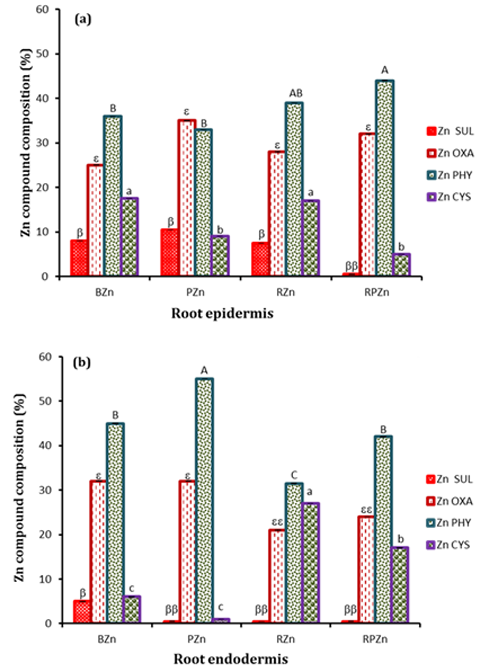 In conclusion, apart from the enhanced epidermal zinc sequestration in roots inoculated with R. leguminosarum, enhanced cysteine synthesis and subsequent endodermal zinc sequestration by cysteine-containing peptides in the endodermis of Rhizobium treatments was identified to be responsible for the enhanced root tolerance to zinc observed. Although P. brassicacearum; the endophytic PGPB of Brassica, appeared to prevent zinc sulfate accumulation, its inability to mediate accumulation of Zn cysteine complexes in endodermis is responsible for the observed stunted root growth in Pseudomonas-only treatments. 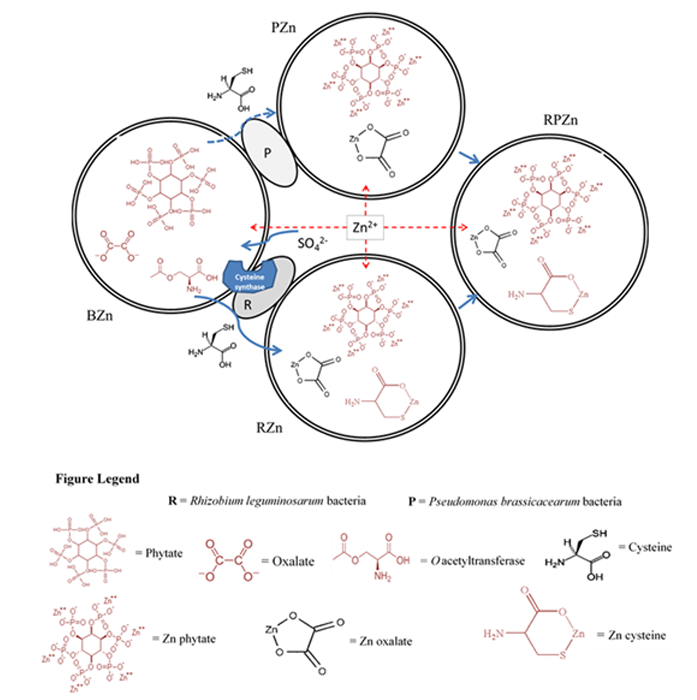 Figure 3: Model of Zn speciation and detoxification in B. juncea roots (BZn) inoculated with R. leguminosarum (RZn), P. brassicacearum (PZn) and a combination of the two bacteria (RPZn) upon exposure to Zn sulfate. The figure depicts the native presence of phytate, oxalate and O-acetylserine, with sulfate uptake enhancing cysteine synthesis. Induction of additional cysteine synthesis by R. leguminosarum in RZn increases cysteine concentration and increases Zn Cysteine chelation in endodermis relative to PZn, whereas the combination of the two bacteria in RPZn leads to a more balanced distribution between phytate and cysteine complexation in root endodermis.