Nanometer sized metal particles can have unusual optical properties, with benefits that include potentially ‘cloaking’ objects rendering them invisible. Ordered arrays of gold or silver nanoparticles that can interact with circularly polarised (CP) light – light where the electric and magnetic fields rotate rather than vibrate – would extend potential application even further. CP light is used in many everyday objects, such as compact disc players and many mobile phone display screens. Future applications for CP light include optical computers, where light carries additional information via clockwise or anticlockwise spins. Methods of manipulating CP light are needed to enable such applications, and metamaterials (artificially constructed composite materials) with a twisted structure could potentially provide such manipulation. To make a twisted array of nanoparticles, cholesterol molecules were grafted onto the surface of gold nanoparticles. While X-ray diffraction experiments demonstrated that the resulting material was arranged in ordered arrays, it was unclear if the structure also had the crucial twist needed to manipulate CP light. Such a twist would show up in circular dichroism (CD) measurements, which track the difference between the absorption of right- and left-handed CP light in a material. Such a difference would exist if the structure was twisted. The Circular Dichroism beamline (B23) at Diamond Light Source provides a unique facility for measuring CD in small samples. Data from this beamline demonstrate that the combination of the gold nanoparticles with cholesterol did indeed have a helical twist. This new metamaterial opens up further optical applications for CP light.

Near the frequency of plasmonic resonance in metal nanoparticles the refractive index becomes a complex quantity and its value can vary significantly close to the resonant frequency. If both the dielectric permittivity and magnetic permeability become negative, then the refractive index can also become negative, with the intriguing consequences mentioned above. It has been predicted theoretically that in order to alter the permitivity significantly and possibly even make it negative, relatively dense arrays of nanoparticles with periodicities much shorter than the wavelength of light are required1. Metal nanoparticles are normally coated with an organic layer to stop them from fusing together. By choosing rod- or disk-like liquid crystal forming molecules in the organic layer, anisotropic particle arrays can be obtained with different controllable particle packing modes2,3. Thus, the plasmonic band can be made to shift significantly as the material is rotated in a beam of linearly polarised light4. 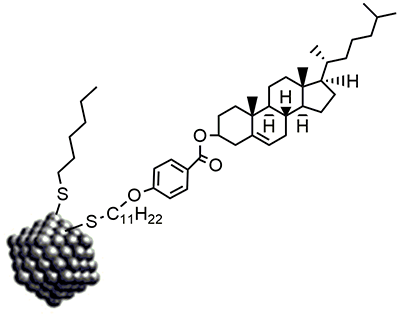 Figure 1: Gold nanoparticle with the two types of ligands attached.

The ultimate aim of this work is to investigate the possibility of developing plasmonic metamaterials that would interact with circularly polarised light, and that would distinguish between right- and left-handed CP light. The first step was to test if it was possible to obtain a dense ordered array of nanoparticles that would be not just anisotropic, but also spontaneously twisted. Gold nanoparticles, 2 nm in size on average, were therefore synthesised; they were initially coated with n-hexylthiol (Fig. 1). Subsequently about half the hexylthiols were replaced by a mesogenic, i.e. liquid crystal forming, ligand that contained cholesterol. As is well known, cholesterol is a chiral molecule, and a cholesterol ester was the first liquid crystal ever recognised as such; it forms the so called cholesteric, or chiral nematic LC phase, in which the molecular axis, or ‘director’, twists forming a helix. 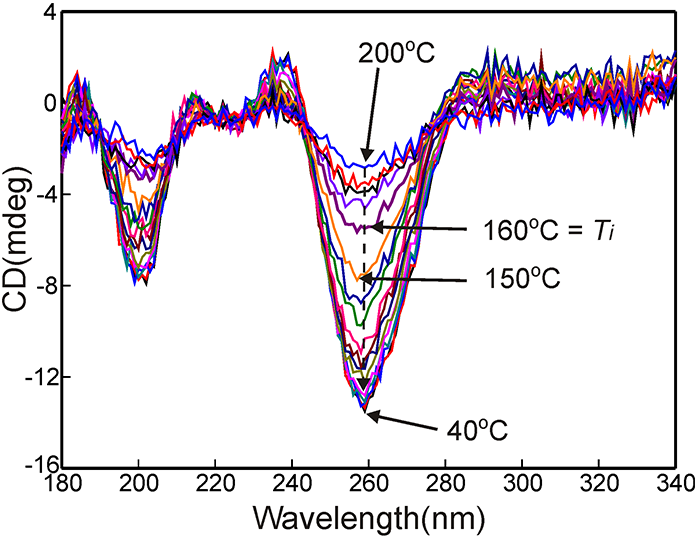 Figure 2: CD spectra in the UV region recorded at temperature intervals of 10 °C; Ti = 160 °C, coinciding with the largest change in CD.

Forming a twisted structure with 2D or 3D positional order is more problematic than forming a twisted nematic liquid that has no positional order. One can argue that long-range positional order and twist are incompatible. Nevertheless, the cholesterol-coated nanoparticles were prepared and examined by small angle X-ray scattering (SAXS) at the University of Sheffield and at the Small Angle Scattering & Diffraction beamline (I22) at Diamond. Thin films were also investigated by grazing incidence SAXS (GISAXS) at the Materials and Magnetism the Materials and Magnetism beamline (I16). The latter method is particularly useful as liquid crystals tend to align in thin films on substrate surfaces, facilitating indexing of the diffraction pattern. The diffraction studies of annealed samples revealed that the cholesterol-grafted nanoparticles self-assemble in rows arranged on an oblique 2D lattice with unit cell parameters a = 4.54 nm, b = 5.28 nm, g = 57.0°. The phase can be classified as columnar LC. While there is no long-range order along the z-axis, the average centre-to-centre distance between the particles was 4.1 nm, as estimated from diffuse scattering. There is one nanoparticle in such a 'unit cell'. From the cell volume, density, electron density distribution and chemical analysis, it was established that there are an average of 151 gold atoms in a particle, and an average of 41 hexylthiol and 37 cholesterol ligands attached to it. Fig. 3a shows a molecular model of the structure, viewed along the column axis. As can be seen, the 2D lattice can be regarded as distorted hexagonal. 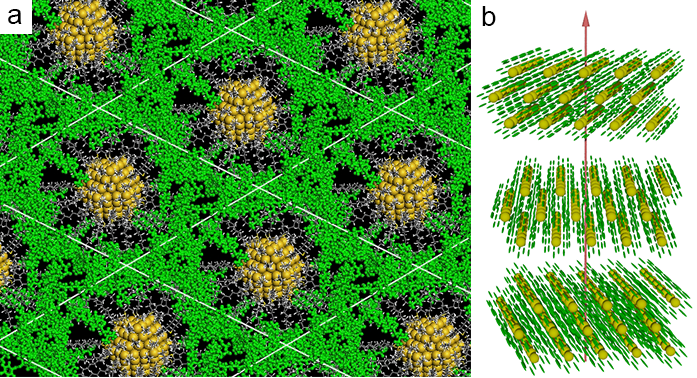 Figure 3: Structure of the twisted columnar liquid crystal phase of cholesterol-grafted gold nanoparticles: a) View along the gold strings (columns); the model was annealed by molecular dynamics; for clarity CPK rendering (yellow) is used for gold atoms, ball-andstick (green) for the cholesterol ester mesogens, and stick for the undecylthiol spacers and hexylthiol ligands; b) Schematic representation of the chiral columnar phase; colour code as in (a); the breaks in the stacks of columnar layers indicate that the helical pitch is long on the molecular scale.

X-ray diffraction is not very helpful when it comes to orientational rather than density fluctuations, and especially if these are on a >100 nm scale. In order to establish whether the superstructure of the LC phase is chiral, it was therefore necessary to use an optical technique. Thus circular dichroism was chosen, and it had to be measured as a function of temperature. Because the cholesterol ligand is intrinsically chiral, it was expected that the isotropic liquid would have a weak but finite CD signal. However, if the LC superstructure was itself chiral, then it would be expected to give a considerably enhanced CD. Beamline B23 was chosen for these CD experiments because it uses a bright light beam produced by the synchrotron that is deflected vertically so that a variety of heating stages could be used conveniently, with a liquid or LC film sandwiched between two horizontal fused silica windows.

Furthermore, the sample could be rotated, as well as scanned with a fine beam in x,y, which is often required. Figure 2 shows a series of CD spectra of the cholesterol coated gold nanoparticles as a function of temperature. The temperature where the LC phase transforms to a disordered liquid, or the isotropization temperature Ti , is around 160 °C. As can be seen, the CD signal at 200 °C is weak, but it increases substantially on cooling, with the greatest change happening around Ti=160 °C. This behaviour confirms that a chiral superstructure forms at that temperature, where the weak CD intrinsic to the molecules changes to a strong CD reflecting the formation of a helically twisted superstructure. Incidentally, care must be taken when interpreting CD spectra from a birefringent material, as birefringence can give false reading of CD. In this experiment, although the LC phase is birefringent, this had no effect on the measurements since the illuminated area contained hundreds of thousands of submicron LC domains, which ensured that the birefringence effects were fully cancelled.

The model of the twisted columnar array of gold nanoparticles is depicted in Fig. 3b. The strings of nanoparticles are surrounded by the cholesterol mesogens (green) lying preferentially along the columns. The successive layers of columns are rotated by a small amount. However, the twist mounts up over hundreds of layers, giving the measured optical effect. The combination of X-ray diffraction and CD spectroscopy experiments, both performed at Diamond, has thus proved to be a powerful tool for investigating complex chiral organic inorganic hybrid structures. Further efforts will be going into increasing nanoparticle size so as to enhance the plasmonic effect.