Conventional X-ray imaging is based on the attenuation of X-rays, a reduction in intensity as the beam passes through matter. Some features are considered to be ‘X-ray invisible’, due to the limited attenuation they cause. Recent research has focused on phase effects, which can enhance detection of these features, and also enhance the visibility of the image in general. ‘Dark field’ or ‘ultra-small angle scattering’ is an additional phase-related X-ray mechanism under investigation, which can provide complementary information on the sample being studied.

Until now, accessing all three of these channels of information in one experiment required complicated set-ups, and moving elements during the experiment – in a time-consuming ‘step and shoot’ approach. A new beam-tracking technique, developed on I13-1, the Coherence branchline of Diamond Light Source’s X-ray Imaging and Coherence beamline (I13), enables researchers to take three channel X-rays in 3D without additional movement. This ‘single shot’ approach is quicker, and reduces the radiation dose and subsequent damage to the sample. It also allows multi-modal dynamic studies, which were previously difficult. Although the technique was first demonstrated using synchrotron radiation, it has since been adapted for use with conventional laboratory X-ray sources.

X-ray imaging has been based on attenuation differences since Roentgen’s discovery. This is a reliable approach, but it suffers when details with attenuation similar to the surrounding background need to be detected. For this reason, changes in X-ray phase have been researched as a means to detect features invisible to conventional, attenuation-based X-ray imaging.

More recently, an additional contrast mechanism, referred to as ‘dark-field’ or ‘ultra-small angle scattering’, has also been investigated, because it provides complimentary information on the examined samples. This is still related to the phase changes imparted by the sample on the X-ray beam, but on a scale too small to be resolved by the imaging system.

Figure 1: Schematic diagram of the beam tracking principle: the x-ray beam is subdivided into 'beamlets' by a mask before it hits the sample; changes in the individual beamlets caused by the sample are then analysed to retrieve attenuation, phase and dark-field signals.

The problem so far was that accessing these three channels of information (attenuation, phase, and dark-field) required complicated setups, with optical elements (crystals or gratings) that needed to be moved during image acquisition. This is a problem particularly in 3D, computed tomography (CT) acquisitions, where multiple projection images need to be acquired at all angular orientations of the sample. The combination of sample rotation and need to displace optical elements in various orientations at each angle leads to a lengthy and somewhat awkward acquisition procedure. Continuous sample rotation is prevented: the sample has to be stopped after each rotation step, the optical elements re-positioned, frames acquired for each of these positions, and only then can the sample be rotated again and the procedure repeated. This makes dynamic imaging hard, if not impossible.

The ‘beam tracking’ approach was developed as a solution to this problem (initially as a ‘planar’ imaging modality1, then adapted to CT). The concept is simple, and is schematised in Fig. 1. A patterned absorbing mask is placed upstream of the sample, to create a plurality of ‘beamlets’. The detector used must have sufficient resolution to resolve these beamlets, and in particular to measure their intensity, position, and width. The three channels of information are retrieved from a single frame, by analysing the changes in these three properties caused by the sample. A reduction in beamlet intensity is a measurement of the sample attenuation. A lateral displacement of a beamlet is a measurement of the refraction angle: since this is proportional to the first derivative of the phase shift, this is also a measurement of the phase shift induced by the sample. Finally, the broadening over its initial width is a measure of how much the beamlet has been scattered by the sample, i.e. of the latter’s dark-field of ultra-small angle scattering power. The idea can be considered an extension to X-rays of the Shack-Hartmann wave front sensor, with dark-field and CT capabilities. Indeed, our recent effort was aimed at demonstrating that quantitative information could be retrieved from CT images (Fig. 2), and that the dark-field signal could be reliably extracted from strongly scattering samples such as wood (Fig. 3). 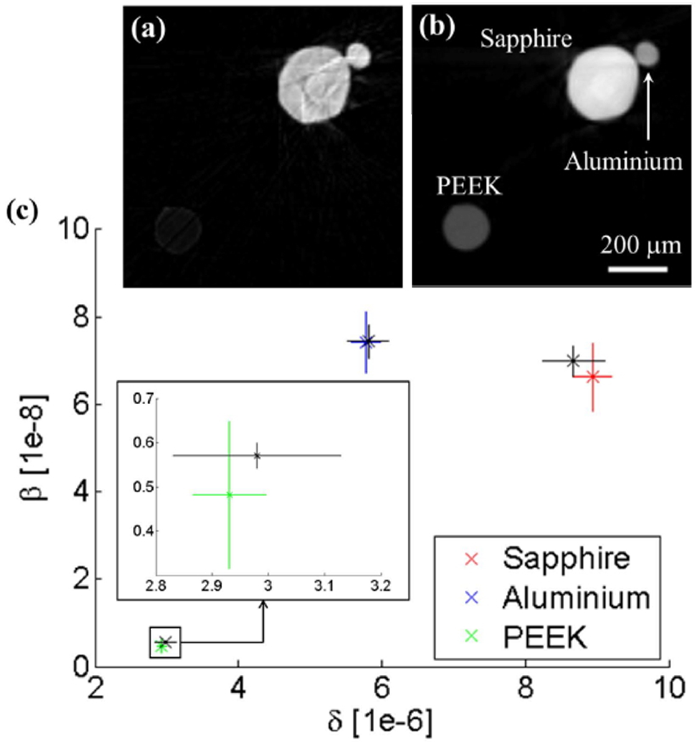 Figure 2: Quantitative reliability of beam tracking CT. Small cylinders of known materials (sapphire, aluminium and polyether ether ketone or PEEK) have been scanned, attenuation (a) and phase (b) CT slices individually reconstructed, and values of attenuation (b) and phaseshift (d) coefficient extracted and successfully compared to their expected values (c). Note that low-absorbing PEEK is hardly visible in the attenuation slice shown in (a), but clearly resolved in the phase slice (b). These thin, homogeneous samples are not expected to generate dark-field signals: indeed the third reconstructed channel was empty, which explains why the 'dark-field' slice is not shown.

Images are formed thanks to the plurality of beamlets: a separate value is extracted for every beamlet, resulting in a map of attenuation, phase and dark-field. Indeed, the spacing between beamlets (i.e. the pitch of the holes in the pre-sample mask) determines the spatial sampling in the acquired image. This means that, if the sample is simply rotated, the final image will have a spatial resolution equal to the spacing between beamlets. However, the spatial structuring of the X-ray beam offers options to increase the resolution. At any given rotation angle, only the portions of the sample matching the mask apertures are illuminated, and rotation then ensures that the entire sample is illuminated. However, this also means that, in the individual projection image, it is the dimension of the apertures, not the spacing between them, which drives the ultimate resolution limit. Indeed, if for every angular position a frame is acquired while the sample is laterally displaced in steps equal to the aperture size (a procedure known as ‘dithering’), an image is obtained where the resolution is determined by the aperture size, instead of the aperture pitch. Rather than a ‘betrayal’ of the original aim of avoiding any additional movement beyond rotation, this should be seen as an additional string to one’s bow. Indeed, dithering is not necessary if a resolution equal to the mask pitch is sufficient, and the mask can be designed in advance according to the desired resolution; however, the same setup can then be used also to acquire images with increased resolution. A fast way to achieve this could be to apply a small lateral displacement of the sample after a complete continuous rotation, then follow it with another continuous rotation, and so on. 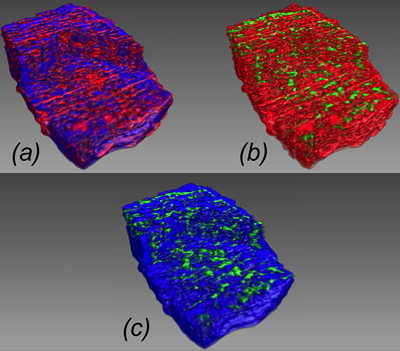 Figure 3: Capacity of beam tracking CT to reliably extract the dark-field channel also for highly scattering materials such as wood, which could pose a challenge to other single-shot methods. The three channels have been colour-coded: attenuation in red, phase in blue and dark-field in green; the three panels show volume renderings of two channels at a time: a) Attenuation and phase; b) Attenuation and dark-field; c) Phase and dark-field. This also shows the complementarity between the three channels, and how they originate from different parts of the sample.

An additional advantage of the absorbing pre-sample mask is the optimisation of dose delivery. All radiation traversing the sample is used to extract image information, while most other methods involve the presence of optical elements downstream of the sample, which absorb radiation after it has gone through the sample. Moreover, while most other methods are inherently coherent, and can be adapted for use with conventional sources only by using additional collimators or gratings to increase its coherence, beam-tracking is intrinsically incoherent, and can be directly transported to a lab set-up2. Indeed, beam tracking is essentially a different implementation of the ‘edge-illumination’ concept3, which has been used with conventional sources since shortly after its initial development.

Finally, it should be noted that there are other, extremely interesting approaches to ‘single-shot’ three-image extraction based on patterning the beam with membranes or other structured materials such as sandpaper4. Their common feature is the creation of a ‘speckle’ pattern, modifications of which caused by a sample are then analysed. Beam-tracking is based on a more substantial structuring of the beam through masks, as this makes the method more robust against a wider range of samples. For example, samples which in themselves create speckle patterns can make it difficult to separate effects due to the sample from the initial beam structuring, especially as far as the dark-field signal is concerned. Analysing well-defined beamlets also reduces demand on detector resolution, which opens the way to the use of more efficient detector devices.

Funding acknowledgements:
This work is funded by the EPSRC (Grants EP/I021884/1 and EP/I022562/1). Additional support to Paul C. Diemoz and Marco Endrizzi is provided through Marie Curie Career Integration Grants within the Seventh Framework Programme of the European Union, PCIG12- GA-2012-333990/334056.