The unique structure of a double-barrelled fluoride ion channel

Illuminating work at Diamond Light Source has unearthed a novel type of membrane protein structure. Astonishingly, scientists showed that a fluoride channel was composed of two monomers that spanned a bacterial membrane in opposing orientations. The fascinating results of this landmark study have been published in the prestigious journal Nature.

Fluoride is a commonly found ion that is prevalent throughout the environment and used in household products such as toothpaste, but it is particularly toxic for microorganisms such as bacteria and yeast. Although the most electronegative element in the periodic table and highly reactive, a prior study surprisingly discovered the existence of fluoride channels. These channels are believed to be protective as they can export the hazardous fluoride from within microorganisms.
To further explore the nature of this remarkable channel, a collaborative team comprising one of the original discoverers of the fluoride channel, based at Brandeis University in Massachusetts along with scientists from the University of Oxford and the University of Chicago set out to solve its crystal structure. 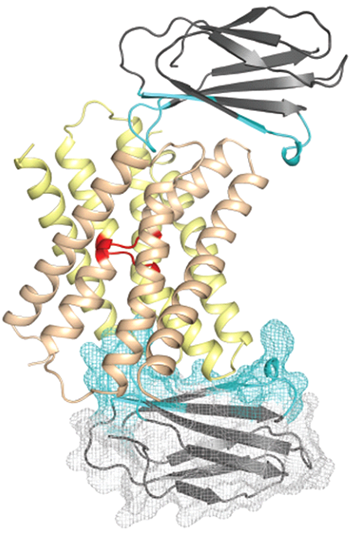 Crystal structure of the fluoride ion channel from Bordetella pertussis in complex with monobody binding proteins on either side of the channel pores.

The scientists chose to study a fluoride channel that had been identified from the Bordetella pertussis bacteria. Hydrophobic membrane proteins, such as the fluoride channel, are notoriously difficult to crystallise, so the group employed a new technique called lipidic cubic phase (LCP) crystallisation. To further enhance crystallisation, the team added engineered chaperone ’monobody’ proteins to form essential contacts with the crystal. The crystals were then flash cooled in liquid nitrogen prior to data collection.
With the application of Macromolecular Crystallography (MX) beamlines I04 and I24 at Diamond, the team discovered that the structure of the channel was highly unusual. Associate Professor at the University of Oxford and investigator of the study, Dr Simon Newstead, explained: “It was a dual topology channel that was a homodimer, comprising two monomeric units that adopted opposite orientations in the membrane. These units come together to form a functional channel, which is an unprecedented finding. This is the first dual topology membrane protein ion channel structure. He elaborated: “Most channels are composed of monomers that are orientated in the same direction, but in this case one subunit is flipped 180° relative to the other to achieve dual topology architecture.”
Twice as efficient
The two subunits allow the channel to create two independent pathways for transporting fluoride across the membrane, via two distinct pores. This incredible arrangement makes the channel twice as efficient. The team also suspects that the channel specifically selects fluoride ions based on their electronegativity, in a process termed ‘electrodiffusion’. In typical ionic channels, the ions are usually selected based on other properties such as their interaction with water and size, so the fluoride channel displayed yet more remarkable features that set it apart from the rest.
By understanding how bacteria remove toxic fluoride, it is hoped that a novel bactericidal agent could be developed. Dr Newstead stated, “Mammalian cells don’t have the same problem with fluoride that microorganisms have. Effectively, fluoride isn’t toxic to us because it doesn’t accumulate in our cells as our bodies are buffered. However, fluoride is trapped in the acidic environment within bacteria, where it inhibits vital metabolic reactions. We could potentially use fluoride as a natural broad-spectrum bactericide, so our next avenue of research is to identify inhibitors of this channel.”
To find out more about using beamlines I04 and I24, or to discuss potential applications, please contact Principal Beamline Scientists Dr Dave Hall (david.hall@diamond.ac.uk) or Dr Robin Owen (robin.owen@diamond.ac.uk) respectively.