Fuel cells generate clean electricity, using hydrogen as fuel and producing only water as a by-product. Current fuel cells use expensive metals, such as platinum, as a catalyst and finding cheaper alternatives would make fuel cells a more viable energy technology. Iron carbide is a chemical compound found in steel and cast iron. Recent research has shown that it can be used as a catalyst for key chemical processes - including those inside a fuel cell.

To use iron carbide as a catalyst, it needs to be produced in a form that has a large surface area to volume ratio; a key characteristic of nanoparticles. When producing iron carbide nanoparticles, the manufacturing conditions (such as temperature) play a large role in the resulting properties of the catalyst. By controlling the manufacturing conditions, it is possible to find which of these produce the most effective catalyst.

Diamond’s High Resolution Powder Diffraction beamline (I11) has a special furnace, allowing the precursor mixture to be heated to 700 °C in a nitrogen atmosphere inside a thin tube. A beam of X-rays passes through the tube, allowing the research team to study what’s happening during the production process.

They found that production of iron carbide via this method is not a one-step process, but involves intermediate stages that can result in the growth of larger particles. This information will allow the development of new methods for making iron carbide nanoparticles with better catalytic activity.

Engineering and Environment Village | Beamline I11

Iron forms a range of interstitial compounds with carbon and nitrogen, the most well-known being cementite (θ-Fe3C). These compounds encompass a wide range of structures that have been extensively characterised because of their importance in cast iron and steel. More recently, iron carbides have been used as catalysts in key reactions such as the Fischer Tropsch process1 and the oxygen reduction reaction in hydrogen fuel cells2.

For applications in catalysis, iron carbide needs to have a porous or nanoparticulate structure that maximises surface area. Perhaps the most attractive route to nanoparticulate iron carbide is sol-gel chemistry, due to its relative simplicity. In general, a sol-gel route to iron carbide involves heating a mixture of an iron salt (nitrate, acetate) with a molecular organic precursor (e.g. gelatin, urea) in an inert atmosphere such as nitrogen3. However, composition, and therefore properties, can vary considerably with different precursors or conditions such as temperature. Iron carbides and nitrides are metastable; the thermodynamic product under inert atmosphere being iron. To synthesise pure iron carbide nanoparticles, mechanistic information about the structure and phase changes during synthesis is crucial.

Figure 1: Schematic of the experimental setup viewed from a) the top and b) the side.

Synchrotron X-ray Powder Diffraction (SXPD) has been used in situ to probe the formation of metal oxides from sol-gel synthesis4. In situ SXPD has also been applied to air-free systems such as the study of oxygen vacancies in Ce0.9Pr0.1O2-δ under O2, He, and H2 5. However, the use of SXPD to probe carbide synthesis introduces considerable additional challenges. Iron nitrides and carbides are easily oxidised and their formation in sol-gel methods is highly dependent on synthesis conditions. Furthermore, sol-gel synthesis reactions release many gaseous and reactive side products such as ammonia, water and carbon monoxide. The research team developed an in situ SXPD method to study the formation of Fe3N and Fe3C from sol-gel precursors; considered to be the first example of in situ study of a carbide or nitride sol-gel synthesis.

In situ SXPD experiments were carried out at the I11 beamline in a custombuilt sample holder (Fig. 1). The samples were preheated (to remove water), powdered, loaded into quartz capillaries and packed on both sides with quartz wool to prevent movement of the powder. The capillary was loaded between Swagelok T-pieces into a custom-built holder and sealed with ferrules. The holder was connected to a slow nitrogen flow and heated using a hot air blower to enable fast heating, an unobstructed incident and diffracted beam path and fast cooling for sample changeover. Diffraction patterns were recorded automatically approximately every 1.2 seconds during heating.

Figure 2 shows an overview of the main crystallographic transformations that occurred during synthesis (FeOx to Fe3N to Fe3C). Closer analysis of the oxide peaks revealed that the reaction involves initial nucleation of magnetite (Fe3O4) followed by reduction to wüstite (FeO). The broad peaks indicated a very small particle size (<3 nm) for both oxide phases. From 560 °C, peaks for iron nitride (Fe3N) begin to form, concurrent with a reduction of intensity of the oxide peaks. The nitride peaks are then gradually replaced by peaks for cementite (Fe3C) from ~620 °C. Interestingly, Scherrer analysis of the nitride and carbide peaks suggests particle diameters of approximately 30 nm and 60 nm for the two phases, respectively. These are consistent with samples observed under transmission electron microscopy. 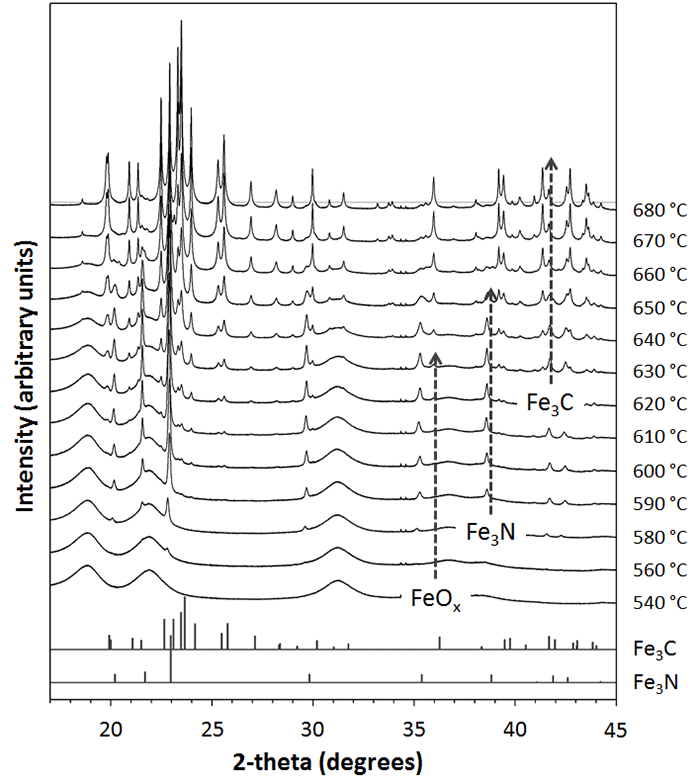 The most important observation in this data is the detail of the Fe3N to Fe3C phase transformation, shown in Fig. 3. Each Fe3N peak can be seen to split into two, indicating that two distinct new phases are formed as intermediates. Analysis of the lattice parameters indicated that these intermediate phases were iron nitride (ε-Fe3N1+x) and carbonitride (ε-Fe3(C/N)). The shifting peak is caused by gradual dissolution of carbon into the iron nitride phase before a final transition to cementite. 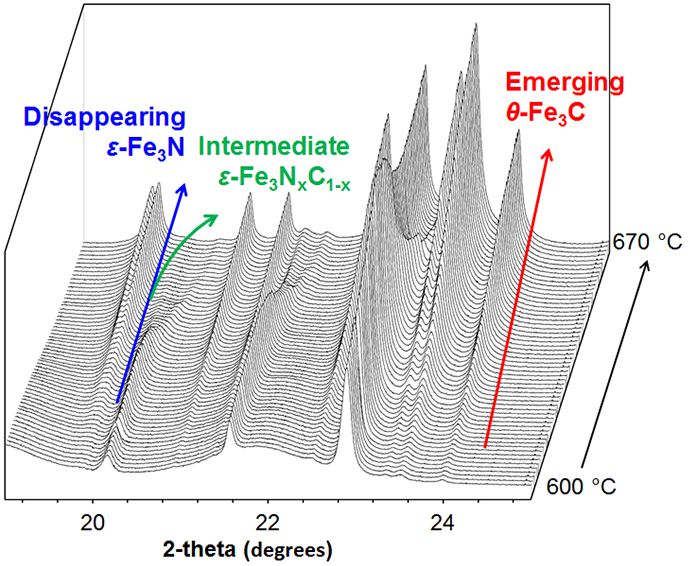 These data offered some fascinating insights into the formation of iron carbide nanoparticles from a sol-gel precursor. In terms of the long term development of iron carbides (and indeed nitrides) for catalysis, the most significant observation is the oxide to nitride transition, which results in considerable grain growth. While the resulting particles are still small (~30 nm), it would be useful to be able to control this step to maintain the very small size of the iron oxide particles (~3 nm). Iron carbides are proposed as a system to replace expensive noble metals such as platinum in fuel cell catalysis, and the ability to control carbide grain size to the same degree as noble metals would enable a direct comparison of these systems. It is hoped that the same SXPD method can also be applied to other carbide systems such as tungsten or tantalum carbides, which are also being studied as noble-metal replacements in fuel cells. Given the potential scope of fuel cells and similar technologies, the development of optimised carbide catalysts is an important goal.

Funding acknowledgement:
The authors acknowledge Diamond Light Source for beamtime (EE9566-1) as well as EU Marie Curie Actions (SusNano) and the University of Birmingham for funding.