Coupling an AFM to an IR beamline breaks the diffraction limit 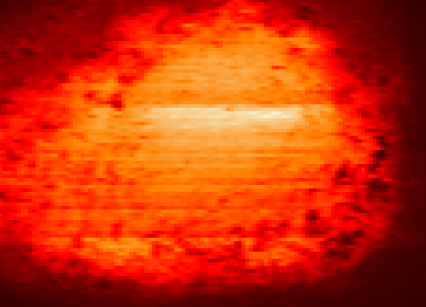 The Multimode InfraRed Imaging And Microspectroscopy (MIRIAM) beamline at Diamond has achieved a world first. By combining three versatile methods – synchrotron IR microprobe, Atomic Force Microscopy (AFM) and photothermal detection - in a novel way, IR spectroscopy moves beyond the diffraction limit of light into nanoscale spectroscopy.
State-of-the-art synchrotron based vibrational microanalysis allows the observation of live cell metabolism, microcatalytic reactions, and the vibrational modes of synthetic molecules; yet nanoscale spatially resolved IR spectroscopy had previously been optically prevented.
Near field detection via AFM can be used to overcome this limitation: two years ago scientists at the Advanced Light Source made demonstrated scattering near-field microscopy with synchrotron radiation to obtain IR spectra with nanometre resolution on thin samples.
The MIRIAM beamline team has achieved infrared absorption nanospectroscopy using photothermal near-field detection and for the first time with synchrotron illumination. The key experimental innovation is that a direct absorption spectrum was measured at nanoscale using synchrotron broadband IR radiation from Diamond. In contrast to the scattering technique, the photothermal method not only gives sub-wavelength spatial resolution via an AFM nanotip, but also a truly linear spectrum, and is not limited to thin samples.
These first experimental results, published in Optics Express show spatial resolution above one order of magnitude better than optical IR microscopy on micrometric thick specimens, together with directly comparable vibrational absorption spectra of the soft/organic matter of the sample matrices. The broad coverage of synchrotron illumination allows spectra to be measured over the entire mid infrared region.

Panorama of the MIRIAM beamline, with the AFM-IR setup at the centre.

Infrared (IR) microspectroscopy is a quantitative analytical and non-destructive method valuable in a wide variety of research, from medical biochemistry and histology, to the science of new and composite materials, and the physical chemistry of surfaces. It is also used for studies in cultural heritage and archeology, biomineralogy, and geology. In biological and medical studies this technique is particularly relevant since it is routinely used to pinpoint single cell biology (e.g. responses to test drugs for cancer therapy or stem cell differentiation/control by chemical molecules), but the diffraction limit means that it is unable to clearly resolve the sub-cellular structure below the micron scale.

Dr Gianfelice Cinque (Principal Beamline Scientst for MIRIAM) and his team have been investigating coupling IR spectroscopy with the use of photothermal nanoprobes to produce higher resolution data. The advantages of using IR synchrotron radiation (IR-SR) as the light source, over benchtop sources/lasers, is that the bright, broadband radiation enhances the sample vibrational spectra quality on small samples, and dramatically speeds up data acquisition while exploring the whole IR range. 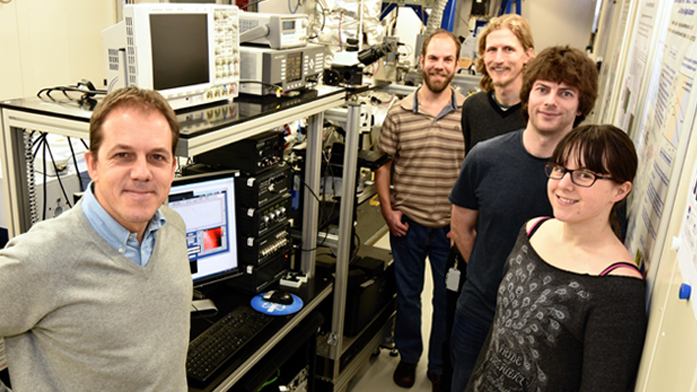 The atomic force microscope (AFM) is a well-established tool in microscopy, using a very fine probe on a sensitive cantilever arm to scan across the surface of a sample and give accurate measurements of its topography. How does this help examine polymer nanostructure or the organelles inside a cell? The key is to use the AFM and a photothermal nanoprobe, i.e. measuring IR absorption and the subsequent mechanical expansion by working in resonance to amplify the signal.
For the example of a soft/organic material (such as biological tissue or a composite plastic specimen), the IR beam shines in from the bottom, illuminating the whole microsample, and the AFM probe is in contact at the surface. When an IR photon is absorbed by a molecule, it immediately vibrates, then de-excites thermally, i.e. the temperature rises and causes a local heat bump. The heat diffuses across the sample and the local information is lost quickly: for organic material the temperature travels approximately 1 µm (a fraction of the width of a hair) in a few microseconds (a millionth of a heartbeat). And the resulting expansion measured by the AFM is a tiny change in height (less than the size of an atom) following a minuscule temperature change (less than a hundredth of a degree).

An ultrafast mechanical chopper spinning in vacuum at circa 20,000 rpm has been implemented on MIRIAM to modulate the illumination beam and set up to the timescale necessary to maintain the excitation locally at the sub-micron level - a technical challenge in its own right. Tuning this chopper to work in resonance with the AFM cantilever produces a larger oscillation and a larger signal. When you correlate the wavelength to the oscillation amplitude you’ve got an absorption spectrum and can tell which molecular species (IR fingerprint) are present quantitatively (absorption intensity).

Dr Cinque says, “the two real advantages of using synchrotron radiation in our field are brightness and broadband. Brightness is how many photons per second per unit area and angle can be focused effectively onto the smallest optical spot at the microscope. If you want to look at a small object, you need to focus as many photons as possible onto the sample spot. The broadband SR advantage means that you’ve got all the wavelengths at the same time, and this is not common when using lasers, for example. So brightness and broadband are what synchrotrons bring to diffraction-limited IR microspectroscopy, or eventually nanospectroscopy like we just proved."

Diamond’s IR radiation spans the largest possible range, extending from the near-IR up to the far-IR (or THz) region. And the beam is 100-1000 times brighter in the mid-far-IR than any conventional broadband IR source.

Figure 1: a) Cyanoacrylate ridge and AFM cantilever; b) near field IR spectrum by synchrotron (red) versus conventional optical IR absorbance (blue).
Current results and future research goals
What Dr Cinque and his team have achieved is an experimental demonstration of the use of IR-SR as a broadband source for photothermal near-field infrared spectroscopy (Fig. 1). By assessing this new method of signal transduction (cantilever resonant thermal expansion) against scanning thermal microscopy they confirmed that their measurements were below the diffraction limit, with a spatial resolution in the 100 nm scale achieved.
In life sciences, a foreseeable evolution of this technique could be used to examine single cells interior and cell machinery at the organelle level - including the effects of viral and bacterial infections, and their responses to trial drug compounds ex vivo.
There are many other potential applications for higher resolution IR spectromicroscopy. In materials science, it is not yet fully explored how nanoscale heterogenous or nanocomposite materials behave locally, and this new method couples measurements of molecular chemistry and physical morphology that can show how a sample is locally different at the molecular level, or locally changing with the alteration of (e.g.) thermodynamic parameters such as temperature or pressure.
According to Dr Cinque, “our target is to have a whole IR spectral image of a microsample at the nanoscale in an hour or less - that’s the real deal. It seems feasible in principle, but challenging in the lab. The ultimate goal will be to really measure cell biochemical machinery live, that’s what we’re dreaming of as the ultimate experiment.”
To find out more about using the MIRIAM beamline (B22), or to discuss potential applications, please contact Principal Beamline Scientist Dr Gianfelice Cinque: gianfelice.cinque@diamond.ac.uk